Developing medical devices takes a lot of time: large parts of the control systems can be designed and tested only once the hardware is ready. Using the hardware-in-the-loop method, which Fraunhofer researchers have transferred from automotive engineering to medical products, development times and costs can be slashed by up to 50 percent.

Beat by beat, the heart pumps blood through the arteries. In some people, however, the heart is too weak to supply the body with enough oxygen and nutrients, a condition often referred to as myocardial insufficiency or heart failure. A heart pump implanted in the body can help, although the control system that gives the pump the relevant commands must work very precisely. When developing medical devices such as heart pumps, engineers usually proceed one step after the next (serial development). They first develop the hardware: in this case, the heart pump. Only much later can they complete development of the control software, combine it with the hardware, and test it manually. Researchers from the Project Group for Automation in Medicine and Biotechnology at the Fraunhofer Institute for Manufacturing Engineering and Automation IPA are speeding up this drawn-out process. “Using the hardware-in-the-loop method, we reduce both development times and development costs by up to 50 percent,” says Jonathan Schächtele, who is a scientist in the project group. 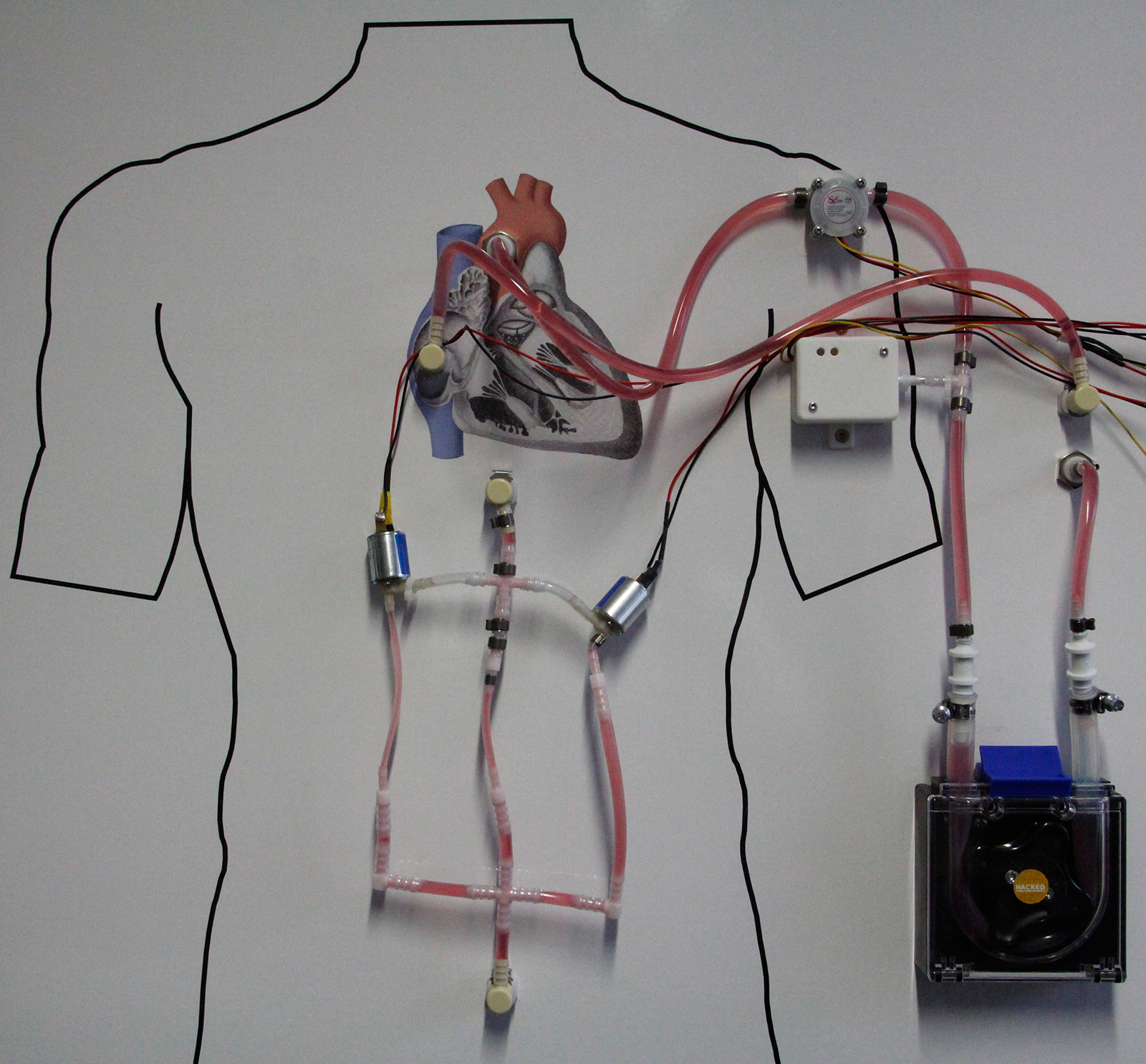 Exhibit to demonstrate the application potential of the hardware-in-the-loop method using the example of a heart assist pump. (Credit: Fraunhofer IPA)

Detecting Errors Early
Hardware-in-the-loop (HiL) techniques were pioneered in the automotive industry. The previous method had been to develop many components in sequence, whereas HiL allowed engineers to develop parts in parallel processes and shorten integration times. Instead of testing electronic control units (ECUs) on the hardware, which runs the risk of damaging them, engineers create a computer model of the car that includes all details relevant for testing. They use this model to test the ECUs before the vehicle is even built. Special interfaces connect the ECU to the virtual car. The ECU receives information from the vehicle and also sends back commands for the simulated car to execute. Because the process is automated, developers can analyze a large number of test cases while also investigating critical system states in a reproducible, risk-free manner. Take an engine fault, for instance: does the control system react correctly when the engine dies? Engineers can analyze what happens when, say, a sensor fails, without actually having to snip the connecting wire. In addition, development becomes more transparent from the start, so faults are uncovered at an early stage. Looking at an assembled car and trying to figure out which component a fault is located in is thus a thing of the past.

Increased Product Safety
Now researchers have transferred this method to modern medical devices in which hardware and software are also strongly intertwined – such as heart pumps. “The challenges they present are similar – medical products are usually complex systems as well,” explains Schächtele. “In addition, scenarios can be tested that could previously be estimated only using manual lab tests – a defect in the system, for instance.” Thanks to HiL, the researchers can speed up the development process and increase the safety of the product. Because the tests run on a fully automated basis, medical device manufacturers can test more situations than previously possible. The automation tends therefore to result in more test runs, and in turn manufacturers can achieve a degree of safety that exceeds the legal requirements. Moreover, documentation of test results, which previously had to be carried out manually, is automatic when using HiL.

The researchers at Fraunhofer IPA offer the whole package. “We design the computer model of the medical product, implement the interfaces between model and control module, define the test cases, and carry out the test runs,” says Schächtele. To help with the automatic test runs and the documentation, the scientists have access to a sort of construction kit.

For the Dutch medical engineering company Soteria Medical B.V., the researchers have already developed and tested the control technology for a biopsy system. “We were able to integrate the PLC quickly thanks to the hardware-in-the-loop method,” says Gerrit Tiggelaar, head of development at Soteria Medical B.V.