Can a computer game train your brain to resist sweets?

That’s the question Drexel University researchers hope to answer with one of two new studies. They have developed a computer game and smartphone app to help people control unhealthy eating habits and ultimately lose weight.

The game is designed to improve a person’s “inhibitory control,” the part of the brain that stops you from giving into unhealthy cravings — even when the smell of French fries is practically begging you to step inside a fast food restaurant.

For the second study, the researchers have developed a mobile app that intelligently detects patterns in a person’s eating habits. When users are likely to slip from their dietary plans, the app provides tailored strategies to put them back on track.

Researchers in Drexel’s Laboratory for Innovations in Health-Related Behavior Change are now seeking participants for both studies.

Sixty-nine percent of adults living in Philadelphia are overweight or obese, according to the Centers for Disease Control and Prevention. While a number of factors contribute to the city’s obesity epidemic, often the mind is the biggest barrier when it comes to losing weight, said Evan Forman, PhD, professor of psychology in the College of Arts and Sciences. It’s been shown, for example, that sweet foods trigger the same feel-good brain chemicals as addictive drugs.

“Millions of people are trying to lose weight, and they are going about it in a reasonable way — by trying to reduce calories. But you’re going to slip from your diet plan. That pretty much happens to everyone,” Forman said. “You could say the secret of helping people actually lose weight is preventing these lapses, so we concentrated on how to best do that.” 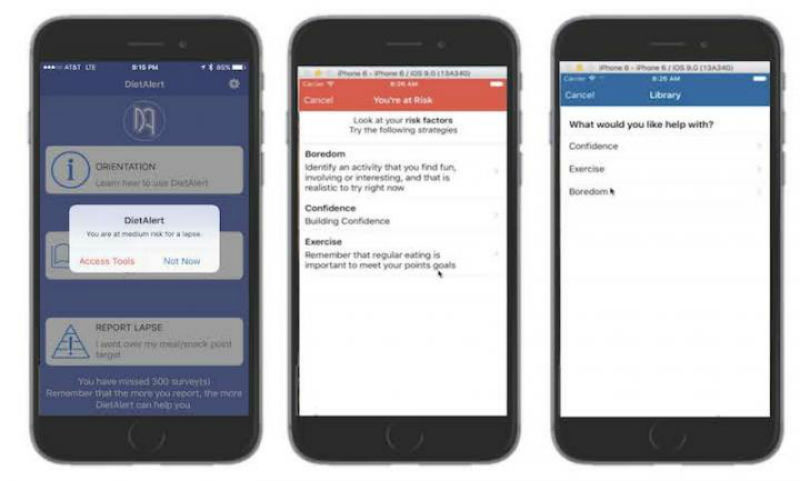 DietAlert is a mobile app, used in conjunction with the Weight Watchers app, which alerts users when they are likely to lapse from their diet plans. (Credit: Drexel’s Laboratory for Innovations in Health-Related Behavior Change)

Improve Your Game, Train Your Brain

All day long, you have to make choices about what foods you consume. And it’s no secret that there is “a powerful part of your mind that drives you toward things that taste good and feel good,” Forman said.

Let’s say a colleague brings a box of doughnuts into the office. For a person who habitually consumes sweets, the first reaction is, “I want one.” The secondary response tries to pump the brakes on that urge. But that reaction is typically slower and less strong than impulse, according to Forman.

“However, studies have shown that if you do certain tasks that involve this inhibitory control over and over again, it actually gets stronger,” he said.

Forman and a team of researchers tested this theory in a recent study, published this summer in the journal Appetite. Habitual snack food eaters were assigned to one of four short, training exercises designed to increase their mindful decision-making and strengthen their inhibitory control. The study concluded that both types of training were successful in reducing snack food eating.

The researchers are now looking to find out whether inhibitory control training can help participants reduce their consumption of sugary foods, and ultimately lose weight.

Their new training game — called DietDash — first requires study participants to disclose the types of sugary foods they consume most frequently. They will then be assigned to one of four versions of a game that is customized to their diet. For example, if someone lists soda and chocolate chip cookies as their favorite treats, those items will appear in the game.

Though other studies have shown this type of training at least temporarily affects users’ eating habits, the researchers want to know what will happen over a course of two months. The project is funded with a grant from the National Institutes of Health.

“The study is really the first to attempt to train people for weeks in a row,” Forman said. “We think this can translate to real-world behaviors, because just like any task, it improves with practice.”

Once the study is complete, Forman said the computer game could also be developed into a mobile app.

An App That Watches Your Weight

The researchers’ second design is a weight loss app called DietAlert, developed with funding from Weight Watchers and the Obesity Society.

Used in conjunction with the Weight Watchers app, the smartphone application collects information about users’ eating habits and uses a mathematical algorithm to determine when they are most likely to lapse from their diet plans.

For example, the app may conclude that a person is most likely to eat junk food after lunch when she has skipped breakfast. As the app learns about someone’s patterns, it will send out a warning alert and offer a tip to help the user stick to his or her health plan.

“Part of the difficulty with a diet plan stems from an inability to determine and target factors that continue to cause lapses over and over again,” Forman said.

The DietAlert app distinguishes itself from the hundreds of other diet applications available, because it not only tracks a person’s eating habits, but it uses that information to give personalized advice.

“This app targets each individual person exactly when they need the help,” Forman said.