Scientists from Rice University, Baylor College of Medicine and other institutions are using synthetic biology to capture elusive, short-lived snippets of DNA that healthy cells produce on their way to becoming cancerous.

Researchers said the work could lead to the development of new drugs that could prevent cancer by neutralizing “DNA intermediates,” key pieces of genetic code that are produced when healthy cells become cancerous. The research is described in a new paper in the open-access journal Science Advances. 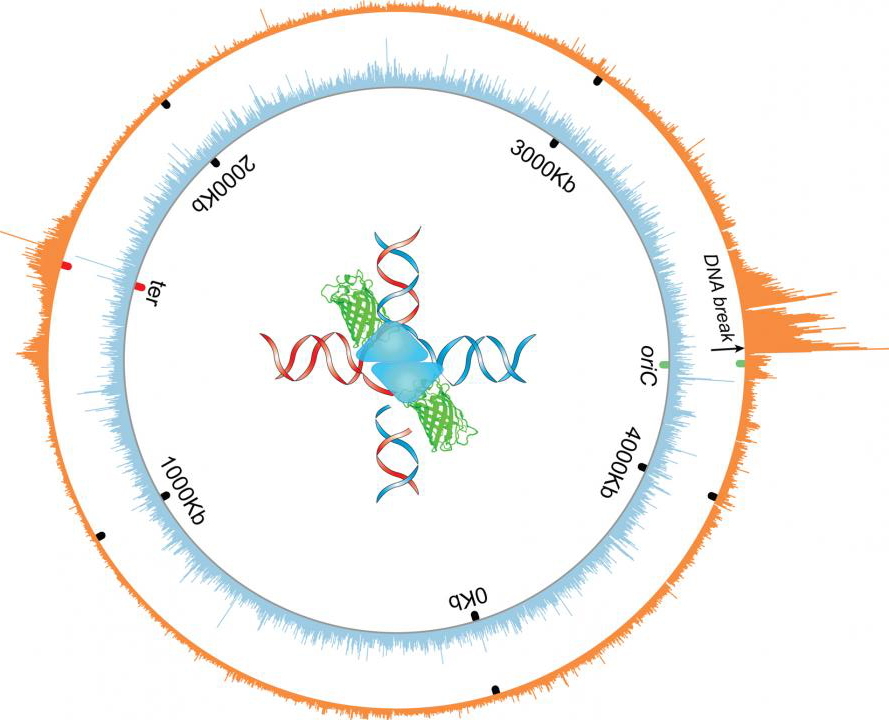 The orange wheel shows the circular chromosome or genome of E. coli bacteria. The spikes indicate where a molecular intermediate in DNA repair — four-way DNA junctions — accumulate near a reparable double strand break in the genome. (Credit: Jun Xia and Qian Mei)

“In my lab we study how the genome — the genes in an organism — changes, in particular, how the genome of normal cells changes to transform the cells into cancerous cells,” said project lead scientist Susan Rosenberg, Baylor’s Ben F. Love Chair in Cancer Research and the leader of the Cancer Evolvability Program at Baylor’s Dan L Duncan Comprehensive Cancer Center.

When cells divide and make copies of the instructions encoded in their DNA, the DNA unwinds and becomes vulnerable to damage that must be repaired. Sometimes the process of repairing the DNA can also cause mutations and errors. When these errors accumulate, the cells may acquire characteristics of cancer.

“The process of editing the DNA is carried out by specific enzymes — proteins that work on DNA to fix the mistakes,” said Rosenberg, who is also an adjunct professor in Rice’s Department of BioSciences.

She said DNA repair usually takes several steps to complete. Between the original DNA and the final product, cells produce DNA reaction intermediates, which are crucial to the reaction but are difficult to study because they are present for just a fraction of a second as an enzyme catalyzes the changing of one molecule into another.

“The intermediate molecules are the most important parts of biochemical reactions,” said Rosenberg, who holds appointments in Baylor’s departments of Molecular and Human Genetics, Molecular Virology and Microbiology, and Biochemistry and Molecular Biology. “They define what the reaction is and how it will proceed. But because they are transient and elusive, it’s really difficult to study them, especially in living cells. We wanted to do that. We decided to invent synthetic proteins that would trap DNA reaction intermediates in living cells.”

Qian Mei, a graduate student in Rice’s Systems, Synthetic and Physical Biology program and a research assistant in the Rosenberg lab, took on the task of applying the synthetic protein that could capture the short-lived intermediates. Using the tools of synthetic biology, Rosenberg and colleagues created and added packages of genes to Escherichia coli, an organism that Rosenberg’s group and others have shown to be a reliable model of the genetic changes that occur in animal cells.

Rosenberg said other investigators also have attempted to trap intermediates, but they have only succeeded in a few biochemical reactions.

“We want to use synthetic proteins to study mechanisms that change DNA sequence,” she said. “We do that now with genetics and genomics in my lab. But genomics, which allows us to compare the genes of normal cells with those of cancerous cells, is like reading the fossil record of these processes. We want to see how the real-time processes that change DNA happen, including all the intermediate steps, which our synthetic proteins allow us to freeze in time and isolate.”

In their tests on , Mei, Rosenberg and colleagues from Baylor, the University of Texas at Austin and the University of Texas MD Anderson Cancer Center found they could discover molecular mechanisms underlying genome instability, a hallmark of cancer. In one instance, they discovered a new role for an protein that is related to five human cancer proteins. They then analyzed gene-expression data from human cancers and were able to implicate two of the five -related human cancer proteins in potentially promoting cancer by a similar mechanism — one not previously implicated.

“The most exciting part in this paper for me is that we can learn something new about the mechanisms of cancer from the model,” said Mei, co-first author of the new paper. “Even though bacteria and human cells are very different, many DNA repair proteins are highly conserved through evolution; this makes a good model to study how cells repair DNA or accumulate mutations.”

Rosenberg and colleagues think that their approach offers significant advantages. For instance, with the synthetic proteins, they have been able to identify specific DNA-repair intermediate molecules, their numbers in cells, rates of formation and locations in the genome and the molecular reactions in which they participate.

“It is most exciting that we are now able to trap, map and quantify transient DNA reaction intermediates in single living cells,” said co-first author Jun Xia, graduate student in the Rosenberg lab and in the Integrative Molecular and Biomedical Sciences program at Baylor. “This new technology helps us reveal the origins of genome instability.”

“When you know these reactions and the role each intermediate plays in the mechanisms that change DNA, you can think about making drugs that will stop them,” Rosenberg said. “In the future, we hope we will be able to design drugs that target specific types of cancers — drugs that block the cells’ ability to evolve into cancer cells, instead of, or in addition to, traditional chemotherapies that kill or stop cancer cells from growing.”