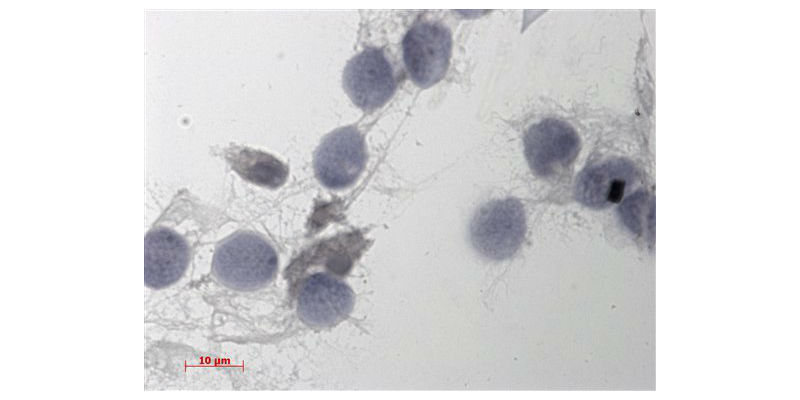 This photo provided Thursday Sept. 17, 2015 by the the National Center of Scientific Research (CNRS) shows one human round spermatid associated with spermatocytes. (Credit: The Associated Press)

A French startup working with a top government lab said it has developed in-vitro human sperm, claiming a breakthrough in infertility treatment sought for more than a decade.

Researchers with Kallistem had announced the discovery previously, but they and French government lab CNRS described how it works for the first time Thursday after taking out a patent on the process.

They have developed sperm from immature cells known as spermatogonial cells, which are present in all males, including pre-pubescent boys, and under normal conditions develop into sperm cells once puberty starts. The technology must now be clinically tested, a process that is particularly painstaking for any treatment involving reproduction.

Philippe Durand, the chief Kallistem researcher, said the genesis of the research was indications that male fertility was declining, which he said could be attributed to environmental factors.

Since “at the heart of the problem is the interior of the testicle,” he said, that was what they first tried to replicate in the lab.

The research team developed a bioreactor using a viscous fluid made partly of substances found in the walls of mushrooms or in crustacean shells to reproduce the conditions within the body. They first used rat cells, then young monkey cells, then finally human cells.

The main challenge was reproducing in the lab a complex physiological development process that usually lasts 72 days in a human, from immature cell to sperm.

In each case, “they took the entire path they would have taken in the testicle in our in-vitro system,” said Durand, who worked with colleagues at CNRS and the elite Lyon 1 university.

CNRS researcher Marie-Helen Perrard, who also helped found Kallistem, said young men with cancer that could cause fertility issues later in their lives would be the first type of patient who could be helped by the process. She said their fertility could be preserved by developing mature sperm from their immature cells, then freezing it.

The research team said the technology could help treat issues affecting 15,000 young cancer patients and 120,000 men worldwide whose infertility cannot be treated any other way.

Ultimately, it has the potential to be a significant addition to infertility treatments that often bypass men altogether, said Liberty Barnes, a research associate at the University of Cambridge and author of a book on male infertility who has no connection to the work being done in France.

As many as 15 percent of couples are infertile, according to the Mayo Clinic. Barnes said men and women each account for about 30 percent of infertility cases, with a combination of factors accounting for the remaining 40 percent.

“As a culture we presume that when a couple is infertile it’s a woman’s problem,” Barnes said. “Infertile men are disappointed that there aren’t more options for them.”