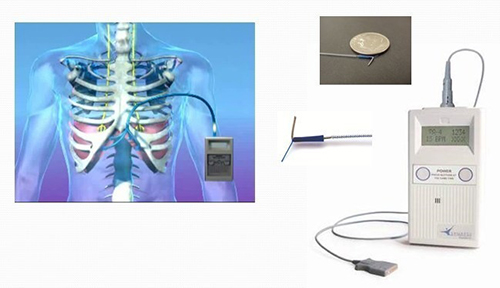 The French trial, which consisted of 74 patients, studied the use of DPS to delay the need for noninvasive ventilation (NIV) (e.g. BiPaP, Trilogy). All patients were implanted earlier than usual, close to their initial diagnosis. Half the patients had their device activated at surgery. The other half, the control patients, had their device activated much later, at the usual time, once they met criteria for NIV. The trial results reported by the authors showed that early implantation was ineffective. However, the trial does nothing to contradict the previous conclusion that on-label DPS use, at the usual later time, concomitant with NIV use, improves survival.

The AAN Practice Parameter for ALS has long recommended noninvasive ventilation (NIV) to slow respiratory decline, lengthen survival, and improve quality of life.  When NIV was used in conjunction with NeuRx DPS®, survival was significantly improved (by 16 months) according to the published FDA Summary of Safety and Probable Benefit for NeuRx DPS®. In contrast, the French study patients were treated with DPS alone, without NIV, well before they would be indicated to receive either DPS or NIV in the U.S.

“This would not be a group of patients we would offer NeuRx DPS® in the U.S.  The device was approved, by the FDA, for people who have documented chronic hypoventilation from ALS and still have intact diaphragm lower motor neurons (LMN) and motor units as identified with pre-operative and intra-operative testing,” stated Raymond Onders, M.D., Professor of Surgery, Remen Chair in Surgical Innovation, University Hospitals Cleveland Medical Center. He further stated, “We purposely submitted to the FDA for approval in this select, later-stage, ALS population. The French study results support our selection criteria and early implantation is not beneficial.”

Waiting until chronic hypoventilation allows the surgeon to identify which parts of the diaphragm have preserved phrenic motor function—i.e., remains stimulable. Dr. Onders went on to say, “We can condition the diaphragm by stimulating the remaining viable phrenic motor units. During disease progression, optimal electrode implantation site changes.  Early implantation not only precludes optimal placement but disallows differentiation between UMN and LMN involvement.  In both situations; suboptimal electrode site or predominant LMN involvement, diaphragm pacing would have no benefit.  Since both the active and control groups in the French study were implanted too early, both groups could be expected to have suboptimal results.  The results of this study do not really inform our current, real-world, on-label use of NeuRx DPS®.”

“The French study results are in stark contrast with the median post-implant survival of 19.7 months in the lead-in controlled, prospective, IDE pivotal study (n=85) and median post-implant survival of 20.9 months in the current U.S. PAS study (n=60).  With proper selection, these 145 study patients survived much longer than the off-label French study patients. Thus, there must be important differences in the respective study populations or in clinical practices.  We are confident in the safety and therapeutic utility of DPS when patients are carefully selected and screened according to proper, current, criteria,” said Anthony Ignagni, President & CEO.