New accelerator-based technology being developed by the Department of Energy’s SLAC National Accelerator Laboratory and Stanford University aims to reduce the side effects of cancer radiation therapy by shrinking its duration from minutes to under a second. Built into future compact medical devices, technology developed for high-energy physics could also help make radiation therapy more accessible around the world.

Now, the SLAC/Stanford team has received crucial funding to proceed with two projects to develop possible treatments for tumors – one using X-rays, the other using protons. The idea behind both is to blast cancer cells so quickly that organs and other tissues don’t have time to move during the exposure – much like taking a single freeze frame from a video. This reduces the chance that radiation will hit and damage healthy tissue around tumors, making radiation therapy more precise.

“Delivering the radiation dose of an entire therapy session with a single flash lasting less than a second would be the ultimate way of managing the constant motion of organs and tissues, and a major advance compared with methods we’re using today,” said Billy Loo, an associate professor of radiation oncology at the Stanford School of Medicine.

Sami Tantawi, a professor of particle physics and astrophysics and the chief scientist for the RF Accelerator Research Division in SLAC’s Technology Innovation Directorate, who works with Loo on both projects, said, “In order to deliver high-intensity radiation efficiently enough, we need accelerator structures that are hundreds of times more powerful than today’s technology. The funding we received will help us build these structures.”

The project called PHASER will develop a flash delivery system for X-rays.

In today’s medical devices, electrons fly through a tube-like accelerator structure that’s about a meter long, gaining energy from a radiofrequency field that travels through the tube at the same time and in the same direction. The energy of the electrons then gets converted into X-rays. Over the past few years, the PHASER team has developed and tested accelerator prototypes with special shapes and new ways of feeding radiofrequency fields into the tube. These components are already performing as predicted by simulations and pave the way for accelerator designs that support more power in a compact size.

“Next, we’ll build the accelerator structure and test the risks of the technology, which, in three to five years, could lead to a first actual device that can eventually be used in clinical trials,” Tantawi said.

The Stanford Department of Radiation Oncology will provide about $1 million over the next year for these efforts and support a campaign to raise more research funding. The Department of Radiation Oncology, in collaboration with the School of Medicine, has also established the Radiation Science Center focusing on precision radiation treatment. Its PHASER division, co-led by Loo and Tantawi, aims to turn the PHASER concept into a functional device.

Prototype accelerator component for the PHASER project, which will use a novel accelerator design hundreds of times more powerful than accelerators in current devices for X-ray therapy. (SLAC National Accelerator Laboratory)

In principle, protons are less harmful to healthy tissue than X-rays because they deposit their tumor-killing energy in a more confined volume inside the body. However, proton therapy requires large facilities to accelerate protons and adjust their energy. It also uses magnets weighing hundreds of tons that slowly move around a patient’s body to guide the beam into the target.

“We want to come up with innovative ways to manipulate the proton beam that will make future devices simpler, more compact and much faster,” said Emilio Nanni, a staff scientist at SLAC, who leads the project with Tantawi and Loo.

That goal could soon be within reach, thanks to a recent $1.7 million grant from the DOE Office of Science Accelerator Stewardship program to develop the technology over the next three years.

“We can now move forward with designing, fabricating and testing an accelerator structure similar to the one in the PHASER project that will be capable of steering the proton beam, tuning its energy and delivering high radiation doses practically instantaneously,” Nanni said.

In addition to making cancer therapy more precise, flash delivery of radiation also appears to have other benefits.

“We’ve seen in mice that healthy cells suffer less damage when we apply the radiation dose very quickly, and yet the tumor-killing effect is equal to or even a little bit better than that of a conventional longer exposure,” Loo said. “If the result holds for humans, it would be a whole new paradigm for the field of radiation therapy.”

Another key objective of the projects is to make radiation therapy more accessible for patients worldwide.

Today, millions of patients around the world receive only palliative care because they don’t have access to cancer therapy, Loo said. “We hope that our work will contribute to making the best possible treatment available to more patients in more places.”

That’s why the team is focusing on designing systems that are compact, power-efficient, economical, efficient to use in the clinical setting, and compatible with existing infrastructure around the world, Tantawi said: “The first broadly used medical linear accelerator design was invented and built at Stanford in the years leading up to the building of SLAC. The next generation could be a real game changer – in medicine and in other areas, such as accelerators for X-ray lasers, particle colliders and national security.” 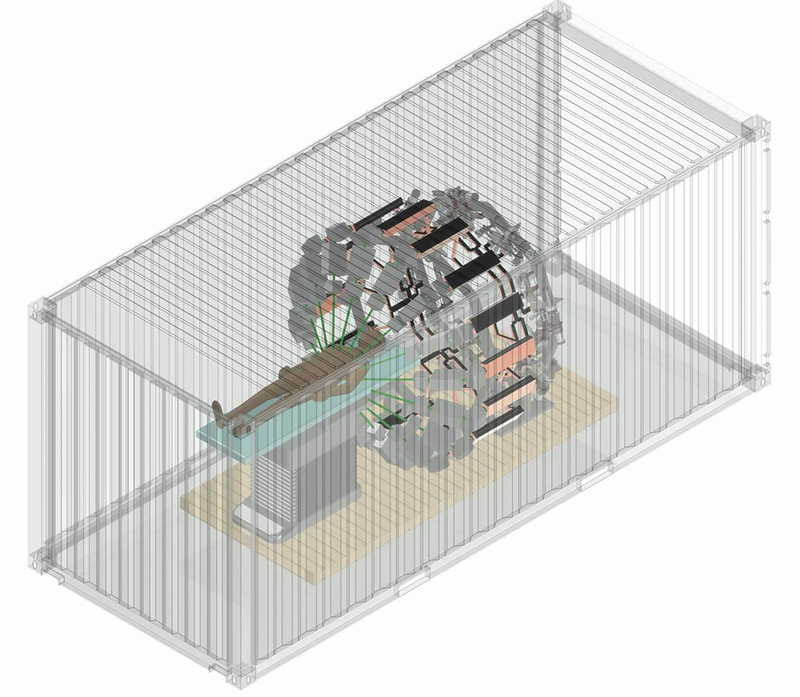 The proposed PHASER design is compact enough to fit into standard cargo containers. Its transportability could help make radiation therapy for cancer more accessible around the world. (Philipp Borchard/TibaRay)