Without a way to equalize the gene expression of the two sex chromosomes — males have XY and females have XX — gender could never have evolved. Scientists are still discovering many details on how the sexes came to be, but a new study in the model organism of fruit flies and other insects reveals that a particularly important secret may be as simple as this: GAGAGA…

That repeating sequence of just two DNA nucleotides turns out to be crucial, the study shows, to how a recently discovered protein called CLAMP binds to the X chromosome. Together with a protein whose name makes the stakes starkly clear — “male-specific lethal” — CLAMP ensures that newly conceived fruit fly males achieve the double expression of X that they need to live. Other kinds of animals sometimes equalize gene expression between the sexes differently, but such “dosage compensation” of the X chromosome occurs across the animal kingdom. 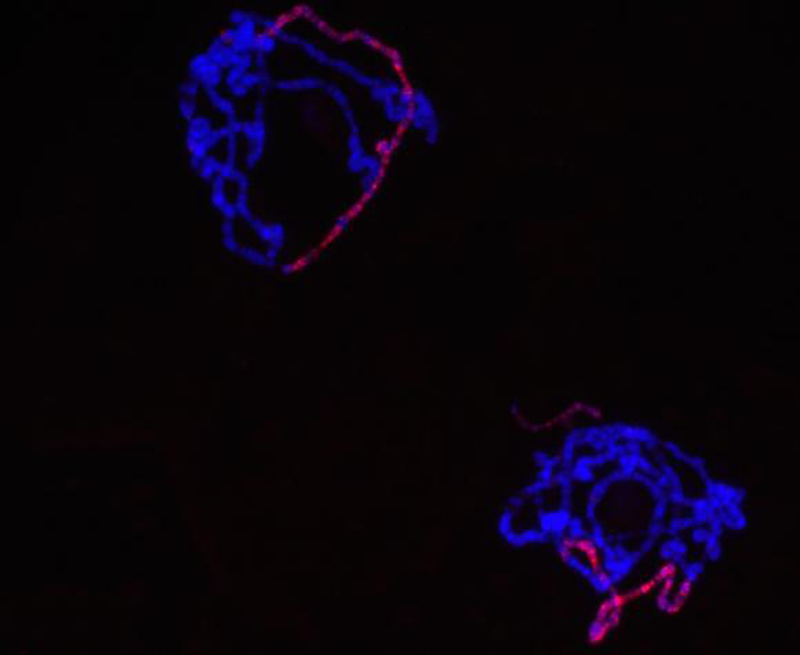 X marks the spot: X chromosomes are easy to spot in these bundles of DNA because the reddish “male-specific lethal” protein has been made to fluoresce along their length. Photo by Leila Rieder

The process likely evolved independently among different species, which is why a really simple repetition of a two-nucleotide (or dinucleotide) sequence like GAGAGA… is probably so crucial to dosage compensation ever having evolved at all, said Erica Larschan, senior author of the study and Richard and Edna Salomon Assistant Professor of Molecular Biology, Cell Biology and Biochemistry at Brown University.

“I do think this expansion of dinucleotides is a very appealing mechanism because it can occur quite simply and then over evolutionary time it gets selected for,” Larschan said.

Larschan’s lab discovered CLAMP in flies in 2013 and showed that it was the protein that links male-specific lethal (MSL) to the X chromosome. What the group didn’t yet know is how CLAMP specifically recognized the X and latched on in all the places where genes needed to be expressed.

In years of further experiments now published in PLoS Genetics, Larschan, lead authors Guray Kuzu and Emily Kaye, and the rest of the team have been able to show that CLAMP has a particularly strong binding affinity for GA repeats (as many as 10 in a row), and that the X chromosome has more than twice as many long GA repeats as other chromosomes. As GA repeats increase, they observed, CLAMP binding gets stronger. They found that the density of these GA repeats is increased at the sites where dosage compensation likely initiates.

Moreover, they confirmed that this wasn’t just true in fruit flies (the exact species is Drosophila melanogaster), but also in other species of flies and in a species of mosquito that diverged from the flies 250 million years ago.

“Therefore, we provide support for a mechanism by which expansion of simple sequence repeated over evolutionary time increases the X-chromosome enrichment of CLAMP that drives the X-specificity of dosage compensation,” the authors wrote.

The implication of the study is that what appears to have happened multiple times in evolution is that the X chromosome took on the long but simple sequence of DNA that was necessary for CLAMP and different versions of MSL to latch on and double gene expression. This process allowed male survival to become possible, paving the way for distinct sexes to exist.

CLAMP had already evolved to perform other functions before the X chromosome took on all the GAGA sequences, Larschan said. CLAMP turns out to be widely conserved throughout insects, and there are similar proteins with GA dinucleotide binding properties throughout nature.

What’s less clear is exactly how the GA sequences have kept finding their way into X chromosome. There are a few mechanisms by which it could have easily happened, though. One possibility, Larschan said, is that as a DNA polymerase enzyme assembles a new a strand of DNA, it might slip into a rut of repeating the sequence several times. Such mistakes are not uncommon — though they don’t always result in the emergence of gender.

The process appears to be in play beyond insects. Evidence is emerging that it may occur in C. elegans worms, Larschan said.

A key question she is tracking is how mammals accomplish dosage compensation. Until recently scientists thought that mammals achieved gender parity by simply silencing a female’s X to meet males rather than amping up the male’s X to meet females. Newer evidence from other labs suggests that both are true: one female X is silenced but then the male X and the other female X are both increased in expression. Meanwhile, other labs have shown that mammalian X chromosomes have a lot of GA repeats, too.

In new research, Larschan is therefore trying to determine whether there is a protein in humans that does what CLAMP does in the fly. The method is to take candidate human proteins and engineer them into flies to see if they can work like CLAMP.

If so, that would suggest that the existence of men and women depends on a similar process. It could be that human gender, too, relies on GAGAGAGAGA.

The National Institutes of Health, the American Cancer Society and the Pew Biomedical Scholars Program supported the research.