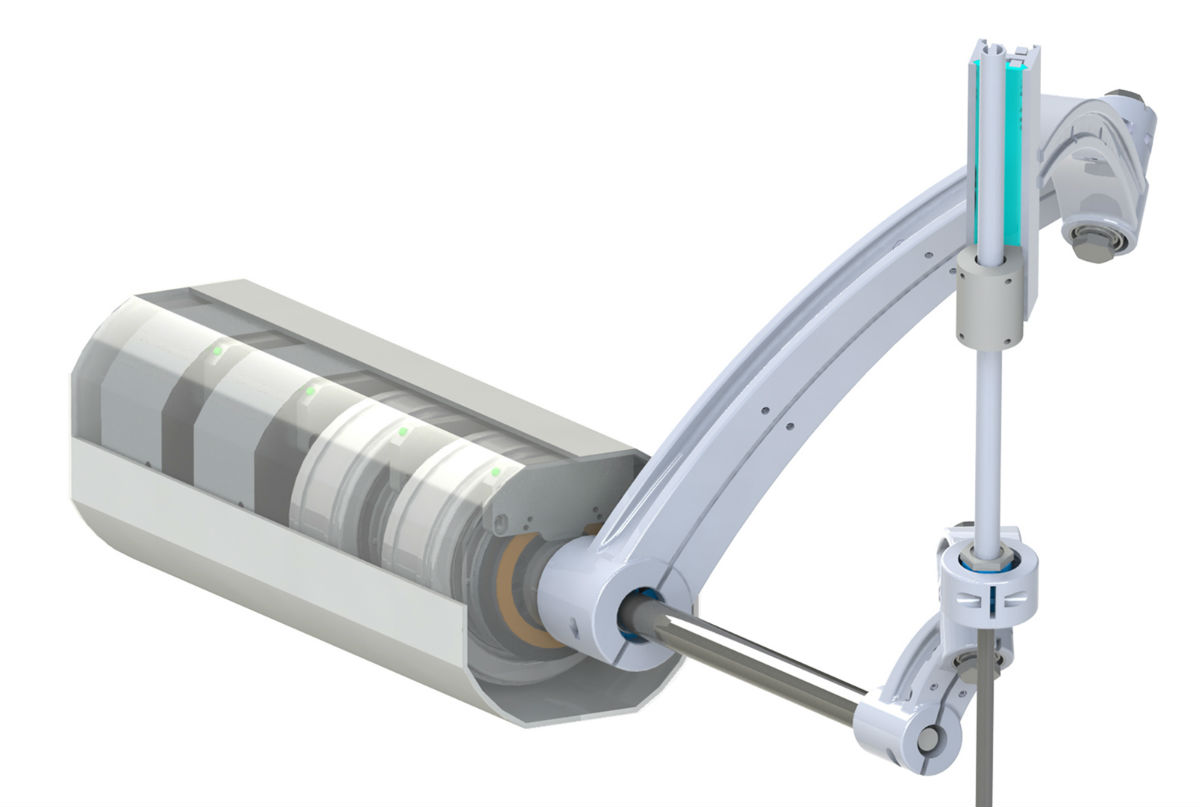 The helping hand can take over smaller activities, such as holding clamps in the operating room. (Credit: Fraunhofer IPA)

Surgeons have their hands full in the operating room: Among other things, clamps have to be set and tools have to be held. Until now, surgical assistants have been responsible for these tasks. In the future, a metal hand that can be controlled by gestures and speech could take some of the weight off of the doctors’ shoulders.

In the future, surgical assistants could be relieved by surgeons, to devote their time instead to their own patients. This is expected to be made possible by a device which has been developed by researchers from the project group for automation in medicine and biotechnology at the Fraunhofer Institute for Manufacturing Engineering and Automation IPA in Mannheim, Germany – together with their colleagues from the surgical clinic of the University Hospital of Mannheim. The project was funded by the Baden-Württemberg Foundation. “It can take on smaller tasks, such as moving and holding tools or even retracting something,” explains Marc Arends, scientist of the IPA project group. The device is reminiscent of a robot arm. The researchers have designed it so that it can hold standard instruments – like those which are already in use in the operating room. One example are endoscopes, which take pictures inside the patient’s body and transmit outwardly: Once the doctor introduces such an endoscope through a tiny incision in the patient’s body, the system takes over: It holds the tool and can adjust the position of the endoscope under the direction of the doctor. The device ensures that damaging the incision point, i.e. the point at which the endoscope enters the body, is mechanically impossible.

Controlled by Gestures
The surgeon mainly controls the mechanical assistant through gestures. To this end, on a display screen, he sees a virtual representation of his hand as well as a small dot, indicating the position of the tool. When he moves his hand, the virtual display on the monitor does likewise. If the doctor “grabs” at the point, he can move it – and position the tool accordingly. The big advantage: he does not have to take off his gloves or touch anything. “As for sterility, we are on the safe side,” says Arends. Special gloves are not necessary.

The researchers are addressing the situation of the surgeon himself holding instruments, making gesture control difficult in the short term: They are currently working on being able to control the system via speech. If the doctor has informed the surgical assistants in advance which movement he intends to perform on the command “retract”, for example, the mechanical hand will also respond to spoken commands in the future.

So that the physician can adjust the manipulator as accurately as possible, his movements are scalable. While the endoscope has to be moved to the right place in the beginning (i.e. the device executes larger movements), smaller movements are required during the subsequent fine adjustment.
The demonstrator has already been completed. The researchers are going to introduce it at the MEDICA trade fair in Dusseldorf from November 16th to 19th (Hall 10, Booth G05). The user interface via which the surgical assistant can be controlled by gestures will also be on display at the trade fair. In addition, the first trials in which doctors are testing the metal hand have already begun. During this process, the questions include: How effective is the team consisting of man and machine? What needs to be improved? The results of the trial series influence the further development of the helping hand.