Albany, New York, December 27, 2016: A new report focusing on the worldwide abdominal surgical robots market has been added to the report offerings of Market Research Hub (MRH). It is titled as “Abdominal Surgical Robot Market Shares, Strategies, and Forecasts, Worldwide, 2016 to 2022”. This study provides a comprehensive analysis of the market in different categories and illustrates the diversity of usage for the concerned devices in surgeries. According to the research analysts, worldwide abdominal surgical robot device market was observed at $2.9 billion in 2016 and is anticipated to reach $12.9 billion by 2022 as next generation devices, instruments and systems are introduced to operate surgeries through small ports in the body rather than large open wounds. 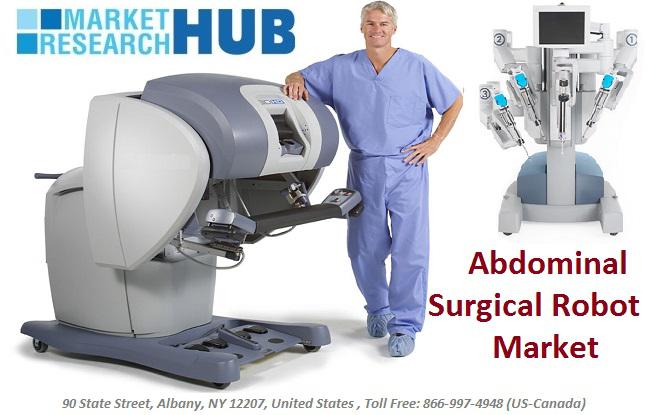 Firstly, the report states that technologies for abdominal robotic surgery applications have rising adoption and commercialization. These technologies primarily work in solving surgical methods to many gynecology, urology and general surgical issues. Now, robotic surgery is being performed throughout the world to improve surgical results and patient recovery time as well as to reduce scarring and loss of blood. Surgeons no longer have to stand throughout the process of the surgery. The surgical robots can continuously be used by rotating surgery teams. Also, Robotic surgical procedures have reached a level of market acceptance that proves their value. This robotic approach of surgery is useful for the treatment of benign and malignant gynecologic as well as for abdominal disease conditions. So, abdominal surgical robots are evolving platforms that are useful for surgeons seeking to achieve superiority and repeatability in every surgery.

Further the report also observed that, existing open surgery is set to be replaced by robotic-assisted surgery. This is the major factor that has steadied the growth for the abdominal surgical robotics market. Young surgeons have steady hands, but even the greatest surgeons sometimes have an off day. As this happens, the advantages of the robot are obvious because the hand is steady every time. In addition to this, the research has studied that now the demand for the less invasive procedure is high among patients and doctors. In this case, robotics surgery equipment’s continue to comprise a fast-growing segment of the medical industry.

Moreover, some of the select market participants are also profiled in the report such as AdEchoTech/ T-MedRobotics, Cambridge Medical Robotics, OMNI, Medtronic, THINK Surgical, Virtual Incision, Smith & Nephew etc. Currently, the only leading company with a commercial footprint in the robotic surgical market is Intuitive Surgical, Inc. (NASDAQ: ISRG), maker of the da Vinci Surgical System.