The device records movement symptoms of Parkinson’s, provides a programmed medication reminder and assessments can be made about response to medication. The new Second Generation PKG is being unveiled at the World Parkinson’s Congress in Portland, OR. It will be available to patients and physicians in leading movement disorder clinics throughout the United States beginning in late September. 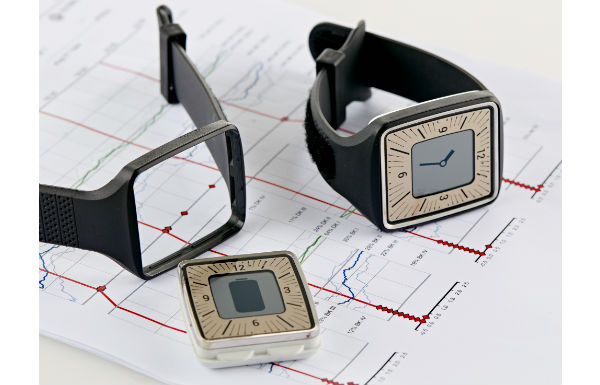 The next generation Personal KinetiGraph, a wrist-worn device that provides 24/7 monitoring of mobility in patients with Parkinson’s disease. (Credit: Global Kinetics Corporation)

“Our new Second Generation PKG represents the most recent milestone in our continued focus on development and marketing of products and services to meet the needs of the Parkinson’s community worldwide,” said Timothy I. Still, president and CEO of Global Kinetics, adding, “With advanced monitoring technology and smart design, this device can play a significant role in improving care for patients, care partners and healthcare providers in the years ahead.”

Developed based on extensive feedback from users of the previous-generation PKG, the Second Generation PKG is smaller, more compact and includes a touch sensitive backlit screen with haptic and visual feedback, a water resistance enclosure and mobile charging and data handling capacity.

With the appearance of a stylish smart watch, the Second Generation PKG is able to deliver data related to changes in patient mobility to support better treatment decisions. The PKG technology can also provide important insights about the patient experience to care partners and to drug companies working to better understand Parkinson’s and shape future clinical research programs.

“I have been wearing the Second Generation PKG nonstop for a year and especially like the medication reminders and the fact that detailed information about my mobility is available so that I can discuss it with my neurologist to make better treatment decisions,” said Robert, 65.  “I also like the fact that it’s a watch—many people without Parkinson’s ask me where I got it!”

“The Second Generation PKG platform also enables us to capitalize on our growing telehealth and clinical trial services businesses, and to build on our already substantial partnerships with global pharmaceutical and device leaders in Parkinson’s,” Still said.

The U.S. clearance for the Second Generation PKG is the most recent milestone in Global Kinetics’ commercialization strategy for advanced technologies to support people with Parkinson’s disease and other movement disorders. The technology is currently pending regulatory approval in the EU in late 2016. Global Kinetics plans to advance this technology to commercial scale targeting significant market opportunities throughout North America, the EU and Asia Pacific.

“Global Kinetics continues to achieve year-to-year growth by delivering on our strategic business objectives and our commitment to make a meaningful difference for people with Parkinson’s. We recently celebrated delivery of our 11,000th PKG movement recording, and we look forward to achieving new levels of support for the patients we serve with our Second Generation PKG system,” Still said.

Global Kinetics Corporation is committed to improving the lives of those with Parkinson’s disease and other movement disorders with advanced medical technologies. The company was formed in 2007 to commercialize its lead product, the Personal KinetiGraph (PKG). Developed by neurologists at the world-renowned Florey Institute of Neuroscience & Mental Health in Melbourne, Australia, the Personal KinetiGraph enables the precise monitoring, quantification and reporting of movement symptoms of neurological diseases. Global Kinetics Corporation, a privately held company, is headquartered in Melbourne, Australia with offices in Stockholm, Sweden, Minneapolis and San Francisco.