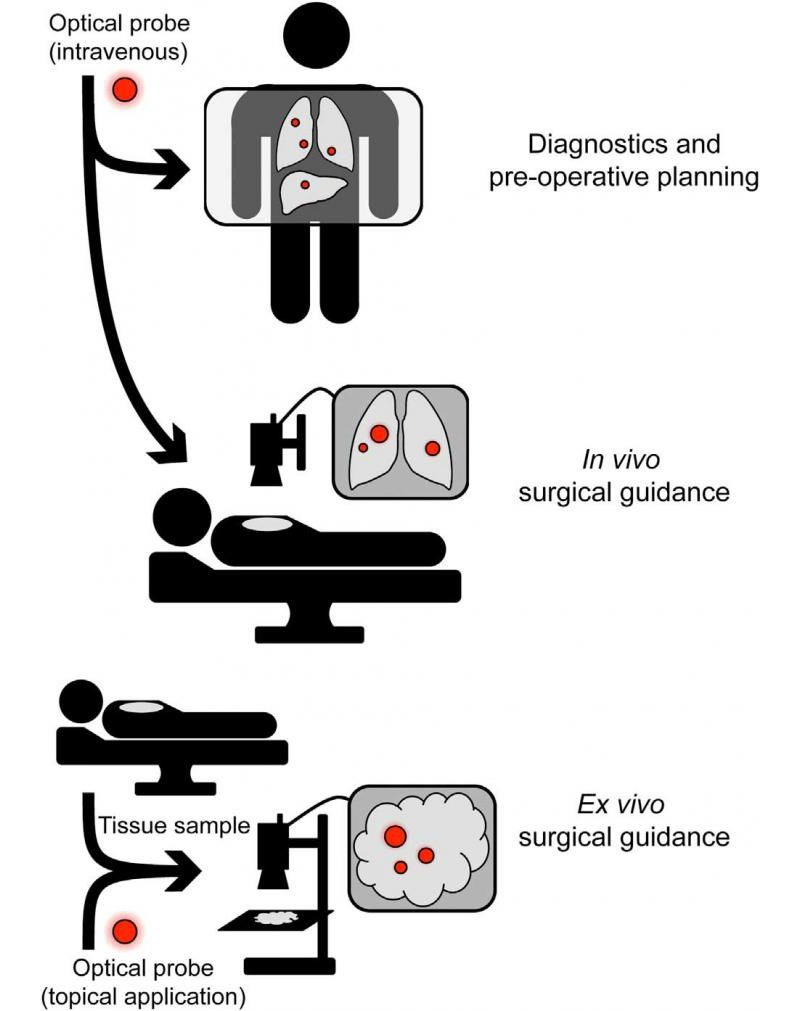 A breast cancer patient is wheeled into the operating room. She is connected to an IV that sends dye molecules into her blood that travel to her tumors. The surgeon inserts a small camera into the patient’s chest and her breast tissue appears on a nearby monitor. The cancer cells are glowing a bright green. Such optical probes, which are meant to improve tumor removal, are already in phase I and phase II clinical trials in humans and could be a common procedure in the next 5-10 years. A review of their progress is published January 21 in the premier issue of Cell Chemical Biology, previously known as Chemistry & Biology.

Fluorescence detection is already in use during surgery. Surgeons can use instruments to detect dyes in the blood that make the blood glow. This is meant to help surgical teams find blood vessels or detect successful perfusion of tissues during transplant. In addition to the non-targeted dye to detect blood flow, there has been a revolution in the development of chemical dyes that can bind to specific cancer cells over the past two decades. This has led to quite a variety in how such reporters bind, the cell types they bind to, and the light the reporters emit.

“It’s a field that’s up and coming really fast right now,” says biochemist Matthew Bogyo, senior author on the review. “Most people have no idea this stuff can be done, its sounds like science fiction, but we’re less than a decade away from this becoming standard practice.”

Molecular imaging is a major focus of Bogyo’s lab at the Stanford University School of Medicine. Since 2003, he and his team have been working on chemical agents that can target enzymes (proteases) that are specifically secreted by cancer cells. The light that these optical probes emit can then be picked up by cameras that can see light that penetrates through skin and tissues. In 2008, Bogyo co-founded a company, Akrotome Imaging, to help translate some of his lab’s discoveries into the clinic.

From Bogyo’s perspective, some of the barriers to moving this early stage research along faster are the costs to funding larger phase II and III clinical trials, as well as questions around what the regulatory path will be like. Another unknown is whether these fluorescent dyes will work for all types of tumors.

“Ideally, we’d like a silver bullet that can light up any lesions that you want to remove,” Bogyo says. “The proteases my lab works on tend to be involved in any kind of inflammatory process, but other agents are more specific–say, looking at markers only upregulated in prostate cancer.”

However they work, having precise optical probes for cancer working in the operating room is predicted to help in two ways: by cutting the cost of having to do repeat tumor removal surgeries because more surgeries will be successful the first time, and most importantly, by helping improve patient outcomes.