Every year, 200,000 women worldwide are diagnosed with ovarian cancer, often in its late stages. Ovarian cancer is very hard to detect in its early stages, and once it is detected, the body is already riddled with dozens of tumors. A 2010 Massachusetts General Hospital (MGH) study found that if tumors down to millimeter size are removed during surgery, the patient’s lifespan could be greatly extended. Since then, a team of MIT Lincoln Laboratory staff, MIT researchers, and MGH surgeons has pursued a method for finding and removing tumors otherwise invisible to a surgeon’s eye.

A team at MIT, headed by Professor Angela Belcher at the Koch Institute for Integrative Cancer Research, had been targeting a variety of cancers that pose challenges caused by delays in diagnosis. They developed novel fluorescent “probes” based on single-walled carbon nanotubes (SWNTs) — chemical compounds that re-emit light when excited by a laser. When injected into a patient, the SWNT probes bind only to tumors, so the tumors appear to glow when seen through an infrared camera. 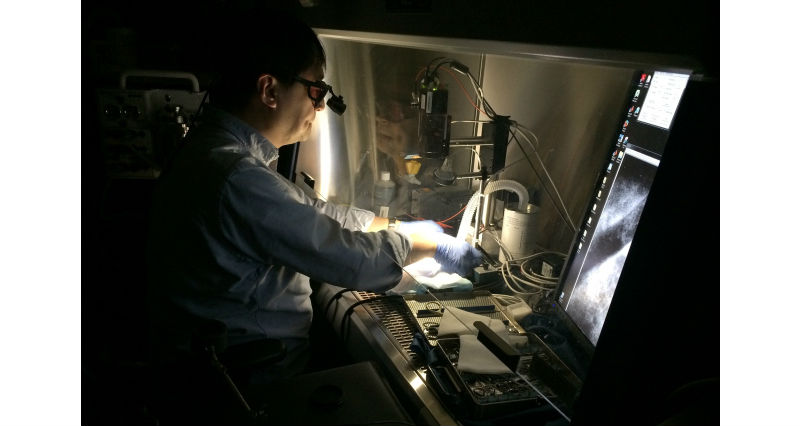 A Massachusetts General Hospital surgeon demonstrates the Lincoln Laboratory’s near-infrared fluorescence imaging (NIRF) system. The system’s camera detects probes attached to tumors, and displays their “glow” on a monitor as he performs surgery.

This fluorescent glow can best be detected in the optical spectrum ranging from 1000 nm to 1800 nanometers, called the near-infrared second-window (NIR-II) band. However, a video fluorescence imaging system, which would allow surgeons to view this phenomenon in real time, didn’t yet exist. Belcher, who wanted to test these SWNT probes on mice with the help of surgeons at the Birrer Lab at MGH, called on Lincoln Laboratory’s expertise to develop a near-infrared fluorescence (NIRF) imaging system in order to do this. “A few other labs were exploring NIR-II band imaging, but their equipment was designed for still imaging, not video,” says Nandini Rajan, a Lincoln Laboratory researcher who joined the project.

“Honestly, I knew this would work the first time I saw tumors smaller than pinheads lighting up on the screen like fireflies,” says Andrew Siegel, describing his reaction to initial tests of the system. Siegel and Rajan, supported by colleagues, designed the NIRF imaging system to work seamlessly with the surgeon. During surgery, the system illuminates the patient’s tissue with an 808 nm infrared laser after the SWNT probe solution has been injected into the cancerous region. The tumors, now covered in fluorescent probes, convert the 808 nm light into a range of wavelengths in the NIR-II spectral band, which the system’s camera can detect. A “blocking” filter prevents laser light from reaching the camera, revealing a sharp view of the glowing tumors on a monitor. In contrast, healthy tissue, with no probes attached to it, appears dark.

While the fluorescence made tumors easy to locate against a dark background, surgeons could no longer see their instruments in relation to the tissue. “So we introduced a novel feature: an ‘in-band’ light source that the NIR-II camera can see,” Siegel said. The in-band light reflects off tissue to create a realistic gray-scale image, appearing on the monitor almost the same as it would appear in visible light — a view surgeons are familiar with. The surgeons can use a footswitch to adjust the in-band light as they work, shifting between the gray-scale view and fluorescent view as needed. “Instead of surgeons having to switch their gaze back and forth between the NIRF display and the patient, they can perform the surgical procedure looking at the NIRF display the whole time,” Rajan says.

The real challenge, according to Siegel, was proving that the NIRF imaging actually provided a measurable survival advantage to patients. Over the course of two years, MGH surgeons using SWNT probes with the NIRF imaging system performed more than 200 surgical procedures on mice. First, the surgeons removed all the tumors they spotted visually. Then, switching to fluorescent mode, the surgeons were able to see and remove tumors as tiny as 200 nm in diameter — smaller than a poppy seed. They also discovered many larger tumors they thought they had already removed. The data show promising results: Despite the “NIRF” mice’s undergoing longer surgeries, they survived longer than did the mice operated without the use of the NIRF. “Discovering that we actually observed a measurable increase in post-surgical survival, even with the negative confound created by the longer surgery these ‘NIRF’ mice endured, was a pleasant surprise,” Siegel says.

This spring, aspects of this work were presented at national technical conferences, and a more detailed manuscript discussing the results of the survival study will be published later this year. Moving forward, the team plans to progress toward human trials on ovarian cancer patients. “Our MGH collaborators are currently applying for Federal Drug Administration approval for the SWNT probes,” Siegel says. In the meantime, Lincoln Laboratory researchers will likely be building a larger-scale system.

“My ultimate goal would be to simplify this technology to the point that any general surgeon has the ability to provide sufficient tumor debulking to completely obviate the need for post-operative chemotherapy,” Rajan says. “Without early detection, this may be the best we can do.”