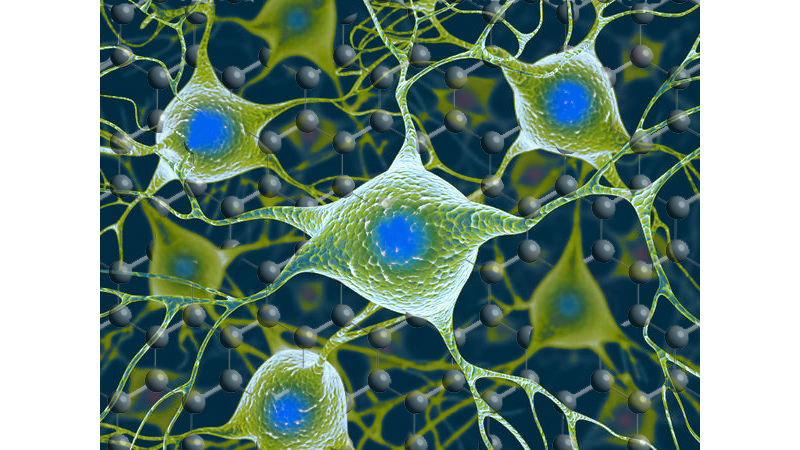 In exciting new research, a team from the Graphene Flagship has recently published work showing how it is possible to interface graphene with neuron cells whilst maintaining the integrity of these vital cells. This work, published in the journal ACS Nano was an interdisciplinary collaboration between the University of Trieste in Italy,  the University Castilla-La Mancha in Spain and the Cambridge Graphene Centre, with nanotechnologists, chemists, biophysicists and neurobiologists all playing an important role.

The Graphene Flagship is a European initiative which promotes a collaborative approach to research with an aim of helping to translate graphene out of the academic laboratory, through local industry and into society.

Scientists have always found the human brain endlessly fascinating and our understanding of the brain has increased to such a degree that by interfacing directly between the brain and the outside world we can now harness and control some of its functions. For instance, by measuring the brain’s electrical impulses sensory functions can be recovered. This can be used to control robotic arms for amputee patients or any number of basic processes for paralysed patients – from speech to movement of objects in the world around them. Whereas by interfering with these electrical impulses motor disorders (such as epilepsy or Parkinson’s) can start to be controlled.

Scientists have made this possible by developing electrodes that can be placed deep within the brain. These electrodes connect directly to neurons and transmit their electrical signals away from the body, allowing their meaning to be decoded. The interface between neurons and electrodes has often been problematic, not only do the electrodes need to be highly sensitive to electrical impulses but they need to be stable in the body without altering the tissue they measure. Too often the modern electrodes used for this interface (based on tungsten or silicon) suffer from partial or complete loss of signal over time. This is often caused by scar tissue formation from the electrode insertion and by its rigid nature preventing the electrode from moving with the natural movements of the brain.

Graphene has been shown to be a promising material to solve these problems. Its excellent conductivity, flexibility, biocompatibility and stability within the body sparked the interest of researchers.

The work published by Prato and colleagues is unique both in the results they found but also in the way they used graphene in their study. Previously, other groups had shown that it is possible to use treated graphene to interact with neurons. However the signal to noise ratio from this interface was very low. By developing methods of working with untreated graphene the researchers retained the electrical conductivity of the graphene making it a significantly better electrode.

Prof. Laura Ballerini – the lead Neuro Scientist in this research explains ‘For the first time we interfaced graphene to neurons directly, without any peptide-coating used in the past to favour neuronal adhesion. We then tested the ability of neurons to generate electrical signals known to represent brain activities and found that the neurons retained unaltered their neuronal signalling properties………This is the first functional study of neuronal synaptic activity using uncoated graphene based materials.’

They found that the untreated graphene electrodes interfaced well with the neurons. By studying the neurons with electron microscopy and immunofluorescence they found that they remained healthy, transmitting normal electric impulses and, importantly, no adverse glial reaction which leads to the damaging scar tissue was seen.

This is therefore the first step towards using pristine graphene based material as an electron for a neuro-interface. Taking the study further Prof. Ballerini plans on “investigating how different forms of graphene, from multiple layers to monolayers, are able to affect neurons … whether tuning the graphene material properties might alter the synapses and neuronal excitability in new and unique ways.” Hopefully paving the way for better deep brain implants to both harness and control the brain, having higher sensitivity and fewer unwanted side effects.

Prof. Prato, from the University of Trieste in Italy who is also a member of the Graphene Flagship Executive Board commented that “We are currently involved in frontline research in graphene technology towards biomedical applications. In this scenario, the development and translation in neurology of graphene-based high-performance biodevices requires the exploration of the interactions between graphene nano- and micro-sheets with the sophisticated signaling machinery of nerve cells. Our work is only a first step in that direction.”

Prof. Ferrari, Director of the Cambridge Graphene Centre, and Chair of the Graphene Flagship Executive Board, stated that “the Flagship will support biomedical research and development based on graphene technology with a new work package and a significant cash investment from 2016. These initial results show how we are just scratching the tip of an iceberg when it comes to the potential of graphene and related materials in bio-applications.”