After Hurricane Harvey flooded her city of Houston in August, Dr. Jennifer McQuade planned to donate socks to those affected. Instead, surprised by the lack of medical care at a nearby shelter, McQuade, an oncologist, became the unofficial leader of a group of physicians and mothers providing emergency aid at the George R. Brown Convention Center in Houston. She triaged patients, solicited donations, and recruited more doctors to join.

Their efforts were so successful that McQuade and the other volunteers still had 2,500 pounds of medical supplies when federal authorities took over the Houston shelter after about a week. So, when Hurricane Maria devastated Puerto Rico on September 20, leaving hospitals without power and short of supplies and drugs, the challenge was finding a plane to deliver the precious cargo to the island.

“Asking for planes, it’s a crazy ask,” says Dr. Ashley Saucier, a pediatric emergency physician in Baton Rouge, Louisiana, who was working with McQuade on the effort in Houston. But that didn’t stop her.

Across the United States mainland, an agile, jury-rigged network of doctors has scrambled to deliver aid to their counterparts in Puerto Rico, often reaching clinics before federal assistance arrived. They draw on a sense of solidarity in the medical community, connections formed through the hurricanes in Houston and Florida — and the use of private jets belonging to corporations, sports teams, and individual donors.

By mid-October, doctors in the states estimate, they delivered 40 tons of supplies.

Saucier, working through a Facebook introduction, got in touch with the Cajun Airlift, a loosely organized group of Louisiana pilots who had volunteered their planes for Texas flood victims. They moved some of the supplies.

Rick Shadyac, the CEO of St. Jude’s Hospital in Memphis, Tennessee, put Saucier in touch with FedEx, which is also headquartered in Memphis, to pick up more surplus supplies from McQuade in Houston and then fly them to Puerto Rico.

And through another doctor, McQuade was introduced to Hilda and Greg Curran, a couple who have family in Puerto Rico and a jet they planned to use.

Five days after Maria made landfall, the Currans delivered 1,000 pounds of medical supplies — additional donations supplied by the Texas Children’s Hospital or purchased through funds raised by Saucier — to the University of Puerto Rico Comprehensive Cancer Center in San Juan. 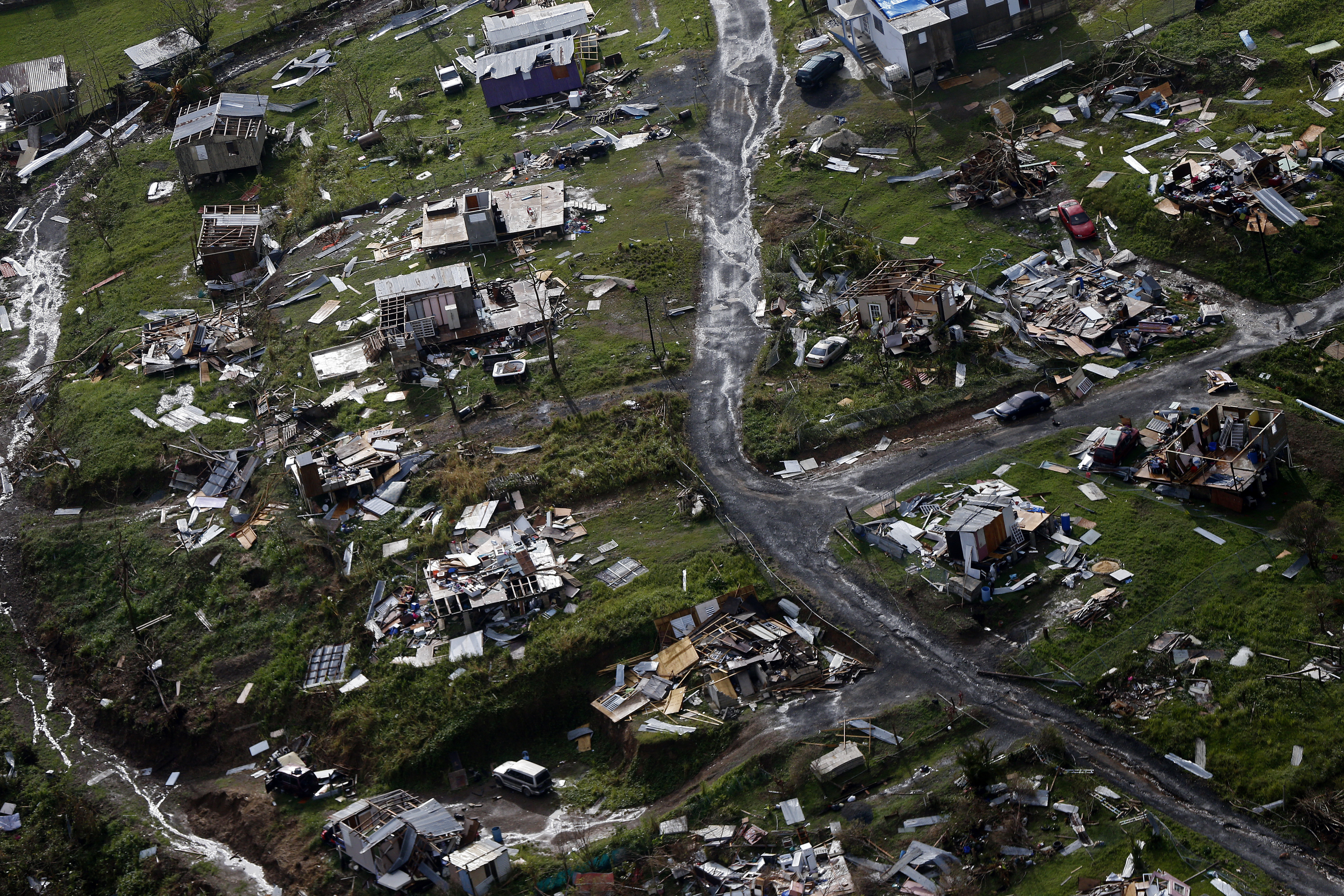 In this Sept. 28, 2017, file photo, debris scatters a destroyed community in the aftermath of Hurricane Maria in Toa Alta, Puerto Rico. Still recovering from Hurricane Maria, Puerto Rico is getting a helping hand from an unlikely source, Moe from “The Simpsons.” The bartender from the animated comedy in a new YouTube video is seen fundraising after getting a warm message by San Juan mayor Carmen Yulin Cruz. (AP Photo/Gerald Herbert, File)

Hospitals on Puerto Rico remain without electricity, forced to rely on generators. Clinics were left in shambles in many parts of the island, desperate for supplies and drugs, including tetanus and influenza vaccines, antibiotics, insulin, and anti-inflammatory drugs.

Many of the physicians organizing the donation drive have family in Puerto Rico, while others — including Saucier and McQuade — had no previous connections to the U.S. territory.

Saucier’s experience with front-line disaster relief dates to August 2016, when southern Louisiana was hit with deadly floods. Shortly after, she formed a small nonprofit called Baton Rouge Emergency Aid Coalition, which raised funds and organized physicians who were ready to spring into action. When Puerto Rico was devastated by Hurricane Maria, that small network joined something much bigger, which grew organically and by word-of-mouth as the scope of the medical disaster on the island unfolded.

The grass-roots network tends to skew younger and female. “It’s 90 to 95 percent women I’m working with, both here and in Puerto Rico,” says Rafael Enrique Guerrero-Preston, a cancer researcher and geneticist in Baltimore, who was born in Puerto Rico. He “met” McQuade and Saucier online on the recommendation of another physician.

“We don’t know each other personally,” he says.

Dr. Dalian Caraballo, a family physician in Miami, was organizing a separate donation campaign and Facebook page for Puerto Rican doctors when one contact introduced her to the volunteers in Texas and Louisiana. Because she lives in a city that is a convenient pit stop for pilots to fuel up, Caraballo has taken charge of collecting supplies and loading them onto jets before they travel to Puerto Rico.

The planes typically fit 1,000 pounds at most, so only supplies that a doctor in Puerto Rico specifically requests will go onboard. Every box is weighed, labeled and accompanied by a “manifesto,” or instructions of who it goes to next. “Even if [the shipment] is small, you know it’s getting to the right doctors,” Caraballo says.

Doctors help for personal reasons and in ways that tie in to their specialties. Dr. Amarilis Sanchez-Valle, a physician in Tampa, studies metabolic genetic conditions that require a specialized formula for infants to avoid brain damage and other health effects.

Initially, her concern was for her family. “I have a sister in Puerto Rico with multiple sclerosis [who] has only two doses left of her medicine,” she wrote in emails to the American Red Cross and the National MS Society on Sept. 25, five days after Maria made landfall. “Is there a way to get medicine to Puerto Rico in the next few days?”

Representatives from both groups apologized, saying they couldn’t help because all the official channels for delivery had been disrupted.

Sanchez-Valle contacted neurologists in Tampa to get a few samples of the medicine. “The problem was, how to get it there? The airport was closed. FedEx was closed.”

A friend put her in touch with a person who works for American Airlines. The airline employee agreed to put the medication in the cargo hold of a relief flight. Sanchez-Valle said her sister is “lucky she’s got me. But what about all the other patients out there? What about my [infant] patient population?” she asked.

Sanchez-Valle contacted former colleagues in Puerto Rico and the formula suppliers she works with. Several companies agreed to donate a few hundred pounds of formula.

The formula reached the island thanks to Dr. Elimarys Perez-Colon and her colleague Dr. Asa Oxner, two internal medicine specialists in Tampa. The women took a commercial flight to San Juan in the beginning of October, each carrying five suitcases with 800 pounds of supplies, everything from syringes to water filters to donations they received from manufacturers and doctors like Sanchez-Valle. When they arrived in San Juan, the airport appeared to be almost fully functional. And the capital and other coastal towns seemed to be receiving adequate help from the Federal Emergency Management Agency and the military, the women say.

But as they traveled to inland towns like Villalba, where they delivered supplies, they found incredible needs.

The hospitals and clinics they reached were running on diesel generators. Asthma medication was in short supply, Perez-Colon notes. People in small towns were drinking untreated water, a major risk for infection. “Clean water is one of the biggest issues,” she says.

For some residents who already had health problems, their conditions worsened in the heat, with no power and limited access to water. Some reported being visited by FEMA once; others, not at all.