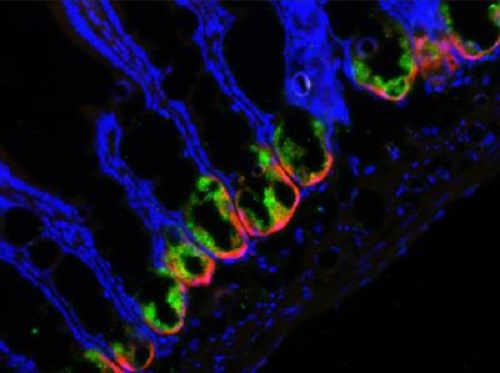 The human microbiome – the trillions of tiny bacteria that live in and on our bodies – is emerging as an increasingly important player in health and wellness. But, our co-existence with these organisms is complex, and scientists are learning that even minor changes in this relationship can lead to big problems with our health.

In a new study published in the journal Cell Host & Microbe, researchers from the University of Rochester Medical Center found that impairing a rare group of cells in the small intestine allows gut bacteria to invade the organ and cause major inflammation. The study was conducted in mice, but has implications for the treatment of inflammatory bowel disease (IBD), a group of disorders characterized by chronic inflammation in the digestive track.

Keeping our guts happy and healthy

Keeping our guts in good shape requires the cooperation of multiple intestinal cells with the bacteria that live around them. Though small in number, intestinal cells called Paneth cells play an important role; they make antimicrobial compounds that keep bacteria in check and help form the lining of the small intestine, a physical barrier between the organ and the resident bacteria.

Previous research shows that changes or mutations in Paneth cells are associated with increased inflammation, including in individuals with Crohn’s disease, a type of IBD. But, scientists were unsure how Paneth cells opened the door to inflammatory damage.

Bad things happen when the guards are gone

Researchers led by Felix O. Yarovinsky, M.D. found the answer in a process called autophagy, which helps cells remove unwanted cellular material or debris. His team turned off autophagy in Paneth cells in mice and then exposed them to a stressor – a parasite called Toxoplasma gondii. Without autophagy, the barrier between the small intestine and the gut bacteria broke down; bacteria invaded the organ and caused severe infection and inflammation.

The study suggests that normal autophagy in Paneth cells is required to regulate bacteria in the gut, keeping it at bay and preventing the gut bacteria from invading host tissue. Paneth cells make up just 2 percent of the cells in the intestine, and the fact that restricting autophagy in these cells led to big problems was an unexpected result.

Scientists know that gut bacteria play a role in the development of IBD, which includes Crohn’s disease and ulcerative colitis. But how bacteria in the gut are controlled in these conditions remains elusive. This study and others point to Paneth cells as key regulators of the interactions between host and gut bacteria, and further research could inform the design of future therapies.