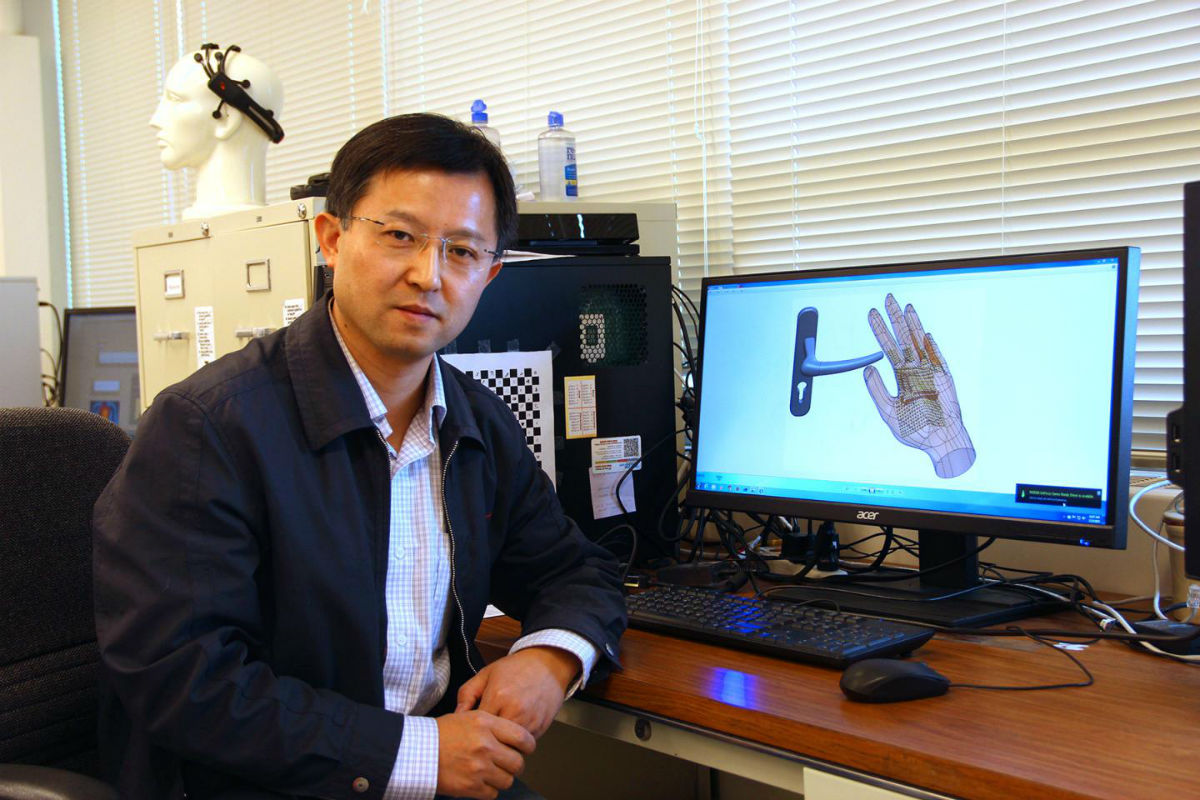 A hand-worn robotic device is being developed that will help millions of blind and visually impaired people navigate past movable obstacles or assist in their ability to pre-locate, pre-sense and grasp an object.

In a collaboration between the University of Nevada, Reno and the University of Arkansas, Little Rock, researchers will develop new technology, with co-robotic functions currently unavailable in assistive devices, for the wearable robotic device. The team received an $820,000, three-year National Robotics Initiative grant from the National Institutes of Health’s National Eye Institute division.

“The miniaturized system will contribute to the lives of visually impaired people by enabling them to identify and move objects, both for navigational purposes or for more simple things such as grasping a door handle or picking up a glass,” Yantao Shen, assistant professor and lead researcher on the project from the University of Nevada, Reno’s College of Engineering, said. “We will pre-map the hand, and build a lightweight form-fitting device that attaches to the hand using key locations for cameras and mechanical and electrical sensors. It will be simpler than a glove, and less obtrusive.”

The technology will combine vision, tactile, force, temperature and audio sensors and actuators to help the wearer pre-sense an object – telling its location, feeling its shape and size – and then grasp it.

“The visual sensors, very high resolution cameras, will first notify the wearer of the location and shape, and the proximity touch sensors kick in as the hand gets closer to the object,” Shen said. “The multiple sensors and touch actuators array will help to dynamically ‘describe’ the shape of the object to the hand when the hand is close to the object, allowing people with vision loss to have more independence and ability to navigate and to safely grasp and manipulate.”

Shen and his research partner Cang Ye, a UALR professor in the Department of Systems Engineering, will guide their team of postdoctoral, graduate and undergraduate students as they develop the technology, design the device and test its usability. Shen will include the project in the senior design course he teaches, guiding students as they develop their own ideas for the device, and perhaps expand the technology past its original intentions.

“Not only will this device help blind and visually impaired people, the methods and technology we develop will have great potential in advancing small and wearable robot autonomy with many potential applications in space exploration, military surveillance, law enforcement and search and rescue,” Shen said.

Associate Professor Shen, a recipient of a National Science Foundation CAREER Award, is director of the Lab for Bioinstrumentation and Automation in the Department of Electrical and Biomedical Engineering at his University. He leads the advanced manufacturing sector of the University’s Nevada Advanced Autonomous Systems Innovation Center.

He conducts research in the areas of bioinstrumentation and automation, biomechatronics/robotics, sensors and actuators, and tactile/haptic interfaces. Shen has published more than 100 research papers in these fields. His research has been supported by federal agencies such as the National Science Foundation and NASA.