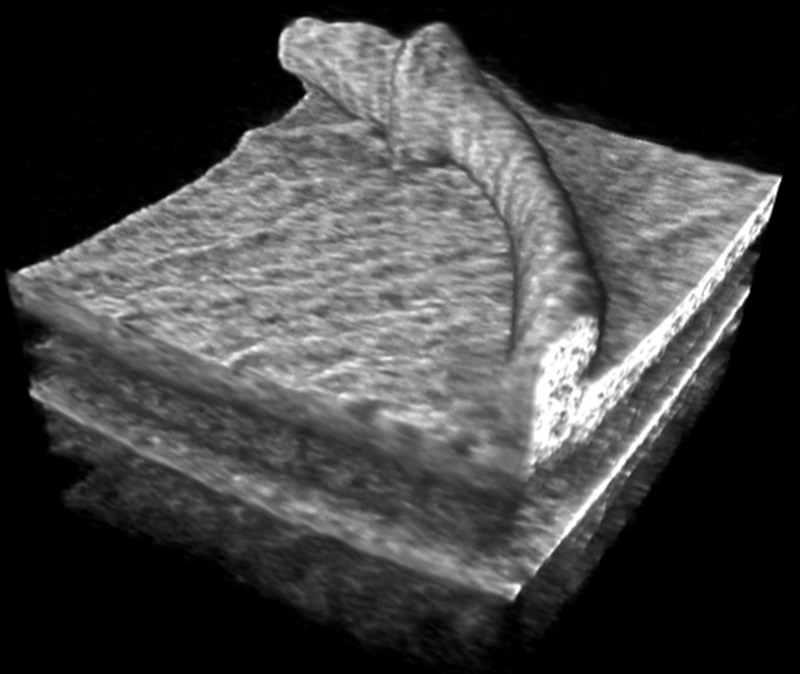 A 3-D image of a section of a retina generated by the new handheld device. (Credit: Duke University)

Engineers and physicians at Duke University have developed a handheld device capable of capturing images of a retina with cellular resolution. The new probe will allow researchers to gather detailed structural information about the eyes of infants and toddlers for the first time.

“Diagnostic tools that examine and image the retina have been well-designed for adults, but are exceedingly difficult to use in infants and young children who can’t hold the required position or focus for long enough periods of time,” said Cynthia Toth, professor of ophthalmology and biomedical engineering at Duke University. “Before now, it hasn’t been possible to measure the impact of injury or diseases on their photoreceptors — the cells in the eye in which light is first converted into nerve signals.”

The eye presents a unique opportunity for research and imaging — it is not difficult to access, it’s relatively self-contained, improvements in function are easily measured and there’s even a natural opening to peer inside. But it is also delicate, with important structures buried millimeters below its various surfaces, so a wide range of technologies are needed to study it.

Over the past three decades, one of the most popular of these has been optical coherence tomography (OCT). By shining specific frequencies of light into the eye’s tissues and comparing those reflections to identical but unimpeded light waves, researchers can build 3-D images several millimeters deep of the back of the eye.

The equipment, however, has traditionally been bulky, meaning the patient must sit still in front of the machine and remain focused on a particular point. And the process takes tens of minutes — an eternity to most toddlers, as any parent knows well.

While handheld devices based on OCT and other technologies have been developed before, they are far from ideal. Some weigh several pounds, making holding them still over a child’s eye tiresome and difficult, and none provide a high enough resolution to see individual photoreceptors. 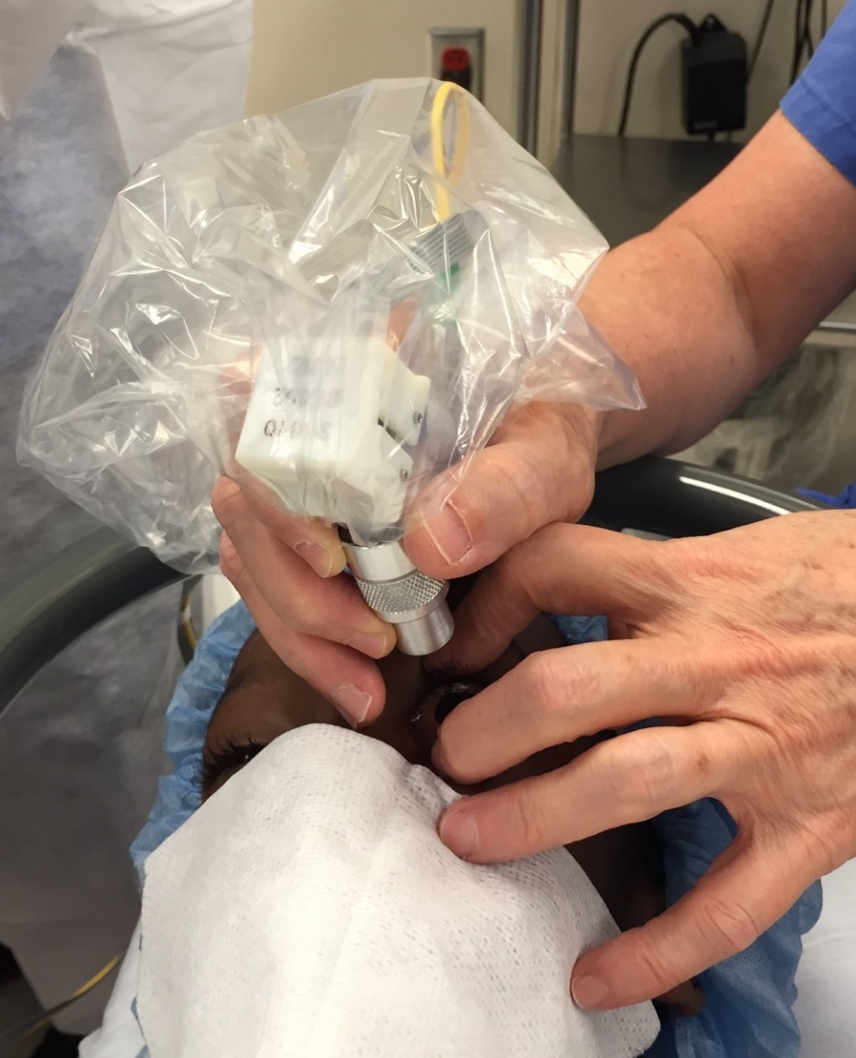 A look at a clinician using the new handheld device. Previous technologies weighed several pounds, were difficult to hold in place for long periods of time and did not have nearly the resolution demonstrated by the new device. (Credit: Duke University)

In a new paper, published online on August 1, 2016, in Nature Photonics, researchers and ophthalmologists from Duke University present a new option. Their handheld device is about the size of a pack of cigarettes, weighs no more than a few slices of bread and is capable of gathering detailed information about the retina’s cellular structure.

“This paper demonstrates the first time researchers have been able to directly measure the density of photoreceptors called cones in infants,” said Josepth Izatt, the Michael J. Fitzpatrick Professor of Engineering at Duke and a pioneer of OCT technology. “As such, it opens the door to new research that will be key in future diagnosis and care of hereditary diseases.”

Without the ability to gather this sort of information, there is little to no data about how a child’s retina develops, as it matures by the age of 10. This limits our knowledge of how diseases affect a child’s vision early in life and makes diagnosis of these diseases more difficult.

A new type of smaller scanning mirror recently reached a point where it could replace larger, older models. A new design using converging rather than collimated light cut the telescoping length of the device by a third. Custom lenses detailing curvature, thickness and glass type were custom designed by first author Francesco LaRocca and specially fabricated. And a mechanical design to hold and integrate the components was designed by Derek Nankivil who, with LaRocca, recently graduated with their PhDs from Duke-and fabricated in a machine shop on Duke’s campus.

The new device was then given to clinicians for testing on adults, which proved that it was capable of getting accurate photoreceptor density information. It was also used for research imaging in children who were already having an eye exam under anesthesia.

With the prototype being used by clinicians at Duke Health, the amount of information being gained from children’s scans could eventually create a database to give a much better picture of how the retina matures with age. The group is already working on the next generation of the design after getting feedback from clinicians on what can be improved.