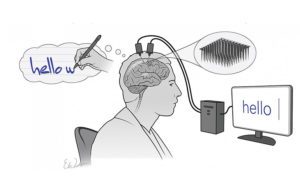 Two implanted electrode arrays record the brain activity produced by thinking about writing letters. This information is then collected and processed in real-time by a computer, which converts that data into words on a screen. (Image courtesy of Shenoy lab & Erika Woodrum, artist.)

Stanford University researchers have developed a system that enables a paralyzed person to write letters just by thinking about them.

They designed the novel brain-computer interface (BCI) to restore the ability to communicate in people with spinal cord injuries and neurological disorders such as amyotrophic lateral sclerosis (ALS). The study, published in Nature, was funded by the National Institutes of Health, including its Brain Research Through Advancing Innovative Neurotechnologies (BRAIN) initiative.

When someone becomes paralyzed by a spinal cord injury, the part of the brain that controls movement still works and their brain still produces similar signals related to the movement of handwriting. The researchers focused on the part of the brain that is responsible for fine movement and recorded the signals generated when a participant who is paralyzed from the neck down attempted to write individual letters by hand.

First, the participant was asked to copy letters that were displayed on the screen, which included the 26 lower-case letters and some punctuation. Implanted electrodes simultaneously recorded the brain activity from approximately 200 individual neurons that responded differently while he mentally “wrote” each individual character. After a series of training sessions, the BCI’s computer algorithms learned how to recognize neural patterns corresponding to individual letters, allowing the participant to “write” new sentences that hadn’t been printed out before, with the computer displaying the letters in real-time.

Using this system, the participant was able to compose sentences and communicate with others at a speed of about 90 characters per minute, comparable to someone of a similar age typing on a smartphone. In contrast, “point-and-click” interfaces have only achieved about 40 characters per minute.

“This method is a marked improvement over existing communication BCIs that rely on using the brain to move a cursor to ‘type’ words on a screen,” said lead author and Stanford research scientist Frank Willett in a news release. “Attempting to write each letter produces a unique pattern of activity in the brain, making it easier for the computer to identify what is being written with much greater accuracy and speed.”

While demonstrated as a proof of concept in one patient so far, this system appears to be more accurate and more efficient than existing communication BCIs and could help people with paralysis rapidly type without needing to use their hands, according to NIH. Similar BCI systems have been developed to restore motor function through devices like robotic arms.

“This study represents an important milestone in the development of BCIs and machine learning technologies that are unraveling how the human brain controls processes as complex as communication,” said John Ngai, director of the NIH BRAIN initiative. “This knowledge is providing a critical foundation for improving the lives of others with neurological injuries and disorders.”

The research team led by study co-author Krishna Shenoy, also at Stanford, plans to test the system on a patient who has lost the ability to speak, such as someone with advanced ALS. In addition, they are looking to increase the number of characters available to the participants (such as capital letters and numbers). The clinical trial, called BrainGate2, is testing the safety of BCIs that directly connect a person’s brain to a computer.