Imagine a virtual world where someone touches your arm during a conversation and you feel the sensation as though they were right there with you. At USC’s Department of Computer Science, assistant professor Heather Culbertson has developed a new haptic armband that mimics the gestures used in social touch, specifically the sensation of a finger moving along the arm. Culbertson developed the armband with colleagues from Stanford University, where she worked as a research engineer before joining USC in January.

The wearable textile is embedded with tiny speaker actuators that rise and fall to simulate different sensations. Controlled by an algorithm, the movement is timed to create a “haptic illusion” that feels like a real human touch.

“Mechanically simulating a long motion, like a finger dragging along the skin, is very difficult to achieve in a small space like a wearable,” said Culbertson, lead author of the study presented at the IEEE Haptics Symposium, 2018.

“With this device, we’re creating the illusion of lateral side-to-side motion using vertical up-and- down motion. The speakers indent into the skin one at a time to simulate the feeling of continual movement.”

Culbertson hopes the sleeve could be an effective therapeutic tool for people with anxiety or individuals at risk of isolation, such as the elderly population. It could also convey directional information for people with visual impairments.

Culbertson hopes the sleeve could be an effective therapeutic tool for people with anxiety or individuals at risk of isolation, such as the elderly population. It could also convey directional information for people with visual impairments. 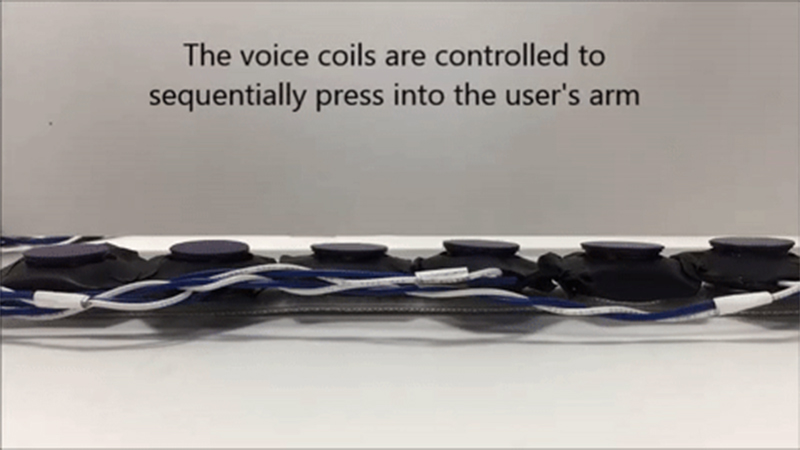 TINY SPEAKERS, OR VOICE COIL ACTUATORS, EMBEDDED IN THE ARMBAND RISE AND FALL TO MIMIC THE SENSATION OF A HUMAN TOUCH. VIDEO/HEATHER CULBERTSON.

Haptics relates to the sense of touch in technology, which is already found in many consumer devices, most notably video games controllers, smartphones and smartwatches.  Culbertson specializes in social haptics, an emerging field that seeks to convey or elicit emotions through artificial means.

“I’m interested in the social side of robotics, specifically how people use touch to communicate and gather information about the world around them,” said Culbertson.

Research has shown that touch is deeply connected to emotion and can trigger a cascade of chemical responses proven to decrease depression and reduce stress during medical procedures. Despite this, computer-mediated interactions currently lack rich, meaningful touch signals.

“We convey so much information through touch. But now we’re spending more and more of our time online, we’re losing that sense of connectedness,” said Culbertson.

“Shopping or talking to friends and family online are experiences currently limited to your visual and auditory senses. My dream is to create virtual sensations of touch that are indistinct from what you feel in the real world.”

The majority of electronics offering haptic feedback use vibrations. But for application in a wearable social device, Culbertson and the team wanted to create a more natural sensation.

“With vibration, you can create the feeling of motion, but it doesn’t feel like you’re mimicking a human touch— it just feels like buzzing,” said Culbertson. “It’s also very hard to isolate vibration, so people just tune it out.”

While experimenting with materials for low-cost prototypes, the researchers found that magnets created a surprisingly convincing sensation of touch as they repelled into the skin.

During a user study, the researchers found that short pulses with long delays created a “creepy” feeling, akin to something crawling up the skin, while long pulses with short delays created a most realistic sensation. Can the feeling get too realistic? “We haven’t encountered that yet,” said Culbertson.

In addition to applications in social devices, Culbertson said this kind of haptic technology could also be embedded in car seats to convey direction and other information to drivers, such as alerts and blind spot warning.

“The sense of touch is highly underused in current technology,” said Culbertson. “This is just the tip of the iceberg.”