Early one October morning 30 years ago, GE scientist John Schenck was lying on a makeshift platform inside a GE lab in upstate New York. The itself lab was put together with special non-magnetic nails because surrounding his body was a large magnet, 30,000 times stronger than the Earth’s magnetic field. Standing at his side were a handful of colleagues and a nurse. They were there to peer inside Schenck’s head and take the first magnetic resonance scan (MRI) of the brain.

The 1970s were a revolutionary time for medical imaging. Researchers at GE and elsewhere improved on the X-ray machine and developed the computed tomography (CT) scanner that could produce images of the inside of the body. Other groups were trying to adapt nuclear magnetic resonance (NMR) for medical imaging, a technology that already used powerful magnets to study the physical and chemical properties of atoms and molecules. But their magnets were not strong enough to image the human body. 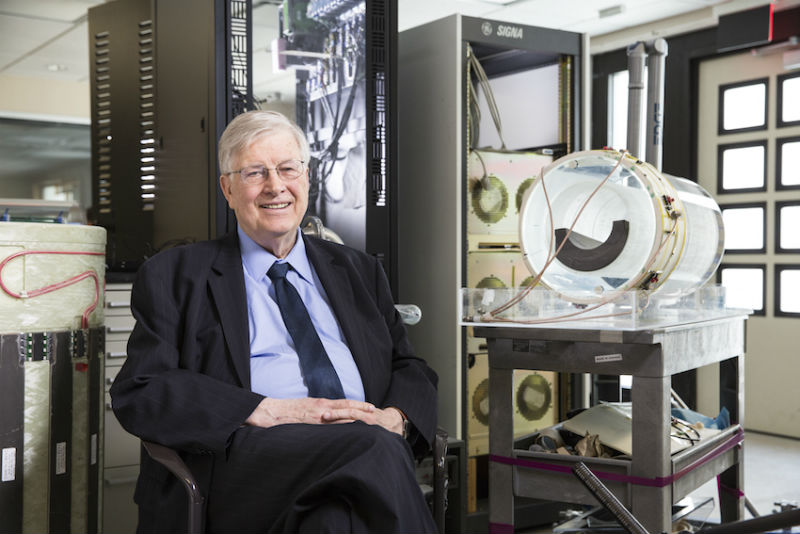 At the time, GE imaging pioneer Rowland “Red” Redington (he built the first GE CT scanner) also wanted to explore magnetic resonance and hired Schenck, a bright young medical doctor with a PhD in physics, to help him lead the way. Schenck spent days inside Redington’s lab researching giant magnets and nights and weekends tending to emergency room patients. “This was an exciting time,” Schenck remembers.

Schenck’s unique background allowed him to quickly grasp the promise of MRI. Unlike CT and X-ray machines that generate radiation which travels into the body, the strong magnetic field produced by MRI machines tickles water molecules inside body parts and makes them emit a radio signal that travels out of the body. Since every body part contains water, MRIs can recognize the source of the signal, digitize it, and apply algorithms to build an image of the internal organs.

It took Schenck and the team two years to obtain a magnet strong enough to penetrate the human body and achieve useful high-resolution images. The magnet, rated at 1.5 tesla, arrived in Schenck’s lab in the spring of 1982. Since there was very little research about the effects of such strong magnetic field on humans, Schenck turned it on, asked a nurse to monitor his vitals, and went inside it for ten minutes.

The field did Schenck no harm and the team spent that summer building the first MRI prototype using high-strength magnetic field. By October 1982 they were ready to image Schenck’s brain. 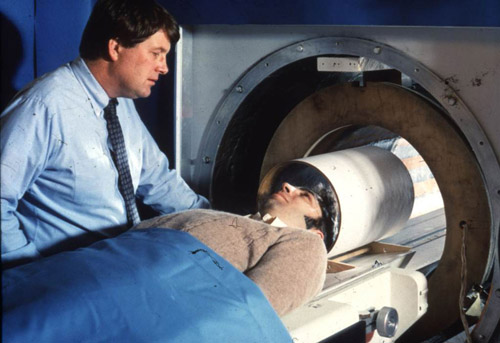 Heady Times: John Schenck (standing) and Bill Edelstein at the front opening of the first whole-body 1.5 tesla magnet in 1983.

Many scientists at the time thought that at 1.5 tesla, signals from deep tissue would be absorbed by the body before they could be detected. “We worried that there would only be a big black hole in the center” of the image, Schenck says. But the first MRI imaging test was a success. “We got to see my whole brain,” Schenck says. “It was kind of exciting.”

The 1.5 tesla magnet has since become the industry standard for MRI. Today, there are some 22,000 1.5 tesla MRI machines working around the world and generating 9,000 medical images every hour, or 80 million scans per year.

Schenck, now 76, still works at his GE lab and works on improving the machine. He’s been scanning his brain every year and looking for changes. Building on new research, he believes that MRI scan could soon help doctors detect and treat depression and other mental disorders. “When we started, we didn’t know whether there would be a future,” he says. “Now there is an MRI machine in every hospital.”