A treatment based on echotherapy, a technology that uses ultrasound imaging to guide the application of therapeutic ultrasound, could be your new option for the treatment of benign tumors such as breast fibroadenomas and thyroid nodules. The Echopulse from Theraclion, a French medical equipment company, combines ultrasound technology, High Intensity Focused Ultrasound (HIFE), and echotherapy.

It works by concentrating the ultrasound energy to a small area (on the tumor). The energy is released, raising the temperature in the area, which produces a therapeutic effect, killing the cells according to Theraclion. 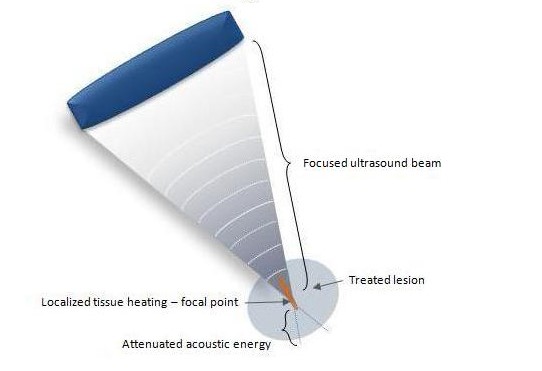 Components of the device include a viewing and treatment unit (VTU), an ultrasound scanner, scanning arms and motors, a skin contact and cooling system, a patient movement detector, and a touch-screen user interface.

The VTU is designed with an ultrasound probe, allowing for real-time imaging of the area in need of treatment. The VTU can rotate around its acoustical axis in order to obtain a sagittal and transversal image of the target during the planning of the operation.

Also included is an embedded HIFU piezoelectric transducer designed with an automatic depth compensation feature. It has a frequency of 3 MHz (central) and a typical maximal acoustic power of 125 W.

Its ultrasound scanner includes an imaging probe head and operates on a frequency range of 7.5 MHz to 12 MHz. The scanning arms and motors are designed with a robotic head and electromagnetic friction brakes.

A disposable EPack is used for the cooling system. It must be replaced prior to each treatment. The cooling system allows ultrasound weaves to be transmitted without loss or distortion, according to Theraclion. It also protects the skin from the heat of the HIFU waves. The components of this system include a cooler, two pumps, and a disposable set of tubing and pouch containing 500 ml of fluid.

“The pump circulates the fluid in a closed circuit between the pouch and the VTU,” says Theraclion. “A temperature sensor located in the VTU ensures that the fluid in the VTU will be properly cooled. Internal pressure is adjusted accordingly.”

The patient movement detector is used to detect movement during treatment. It is located on the gantry and mounted on an articulated arm.

“The detector sends an infrared light on the patient body to measure its distance to the patient. When the patient moves, the detector receives a variation of the position, the computer triggers an alert, and the treatment stops. Depending on the Echopulse system configuration, the laser can be Class 1 or Class 3B,” explains Theraclion.

The idea for this technology was developed by EDAP in 1993. Theraclion is partnering with University of Virginia for proceeding with clinical studies.