Researchers are creating an artificial womb to improve care for extremely premature babies — and remarkable animal testing suggests the first-of-its-kind watery incubation so closely mimics mom that it just might work.

Today, premature infants weighing as little as a pound are hooked to ventilators and other machines inside incubators. Children’s Hospital of Philadelphia is aiming for a gentler solution, to give the tiniest preemies a few more weeks cocooned in a womb-like environment — treating them more like fetuses than newborns in hopes of giving them a better chance of healthy survival.

The researchers created a fluid-filled transparent container to simulate how fetuses float in amniotic fluid inside mom’s uterus, and attached it to a mechanical placenta that keeps blood oxygenated.

“We start with a tiny fetus that is pretty inert and spends most of its time sleeping. Over four weeks we see that fetus open its eyes, grow wool, breathe, swim,” says Dr. Emily Partridge, a CHOP research fellow and first author of the study published in Nature Communications .

“It’s hard to describe actually how uniquely awe-inspiring it is to see,” she adds.

Human testing still is three to five years away, although the team already is in discussions with the U.S. Food and Drug Administration (FDA).

“We’re trying to extend normal gestation,” says Dr. Alan Flake, a fetal surgeon at CHOP who is leading the project and considers it a temporary bridge between the mother’s womb and the outside world.

Increasingly hospitals attempt to save the most critically premature infants, those born before 26 weeks gestation and even those right at the limits of viability — 22 to 23 weeks. Extreme prematurity is a leading cause of infant mortality, and those who do survive frequently have serious disabilities such as cerebral palsy.

The idea of treating preemies in fluid-filled incubators may sound strange, but physiologically it makes sense, says Dr. Catherine Spong, a fetal medicine specialist at the National Institutes of Health.

“This is really an innovative, promising first step,” says Spong, who wasn’t involved with the research.

One of the biggest risks for very young preemies is that their lungs aren’t ready to breathe air, she explains. Before birth, amniotic fluid flows into their lungs, bringing growth factors crucial for proper lung development. When they’re born too soon, doctors hook preemies to ventilators to keep them alive but risking lifelong lung damage.

Flake’s goal is for the womb-like system to support the very youngest preemies just for a few weeks, until their organs are mature enough to better handle regular hospital care like older preemies who have less risk of death or disability.

The device is simpler than previous attempts at creating an artificial womb, which haven’t yet panned out. 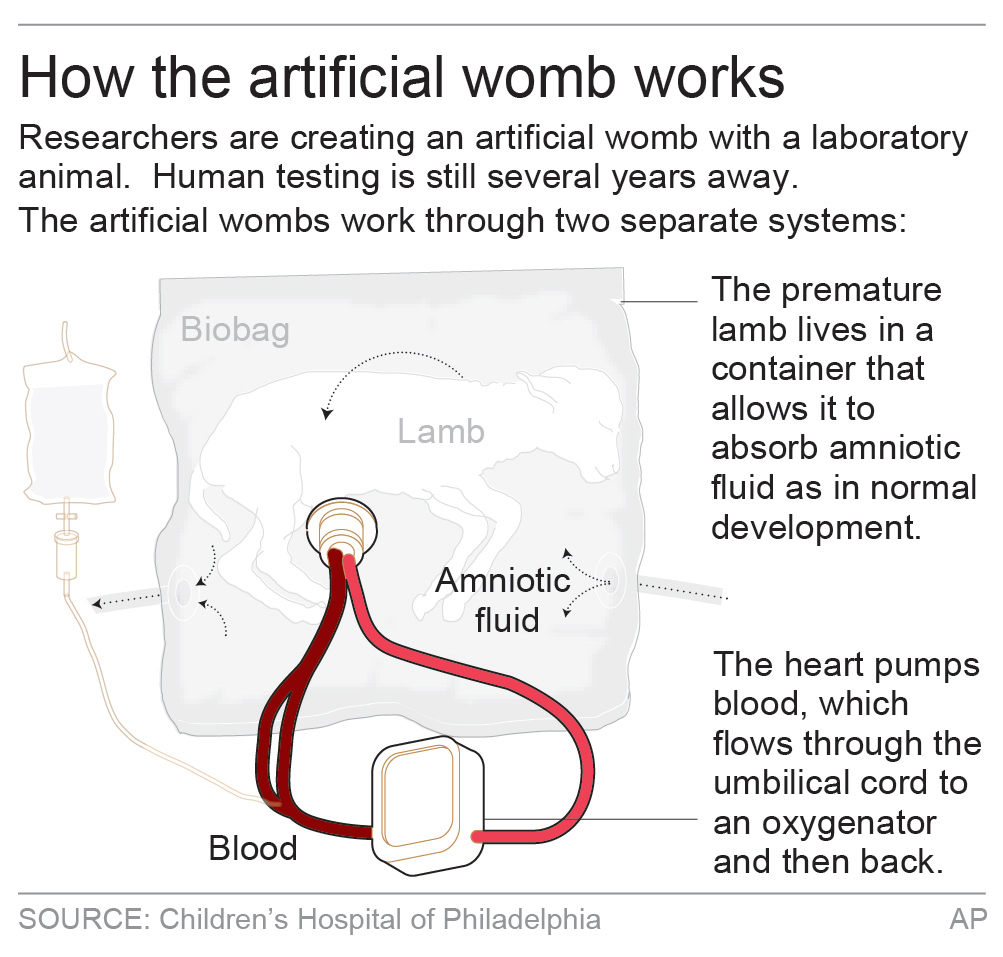 How the “Biobag” system works:

—The premature lambs were delivered by C-section and immediately placed into a temperature-controlled bag filled with a substitute for amniotic fluid that they swallow and take into their lungs.

“We make gallons of this stuff a day,” says fetal physiologist Marcus Davey. It’s currently an electrolyte solution; he’s working to add other factors to make it more like real amniotic fluid.

—Then the researchers attached the umbilical cord to a machine that exchanges carbon dioxide in blood with oxygen, like a placenta normally does.

—The lamb’s heart circulates the blood, without the need for any other pump.

The researchers tested five lambs whose biological age was equivalent to 23-week human preemies, and three more a bit older. All appeared to grow normally, with blood pressure and other key health measures stable and few complications during the weeks they were inside the womb-like device.

The study didn’t address long-term development. Most of the lambs were euthanized for further study that found normal organ development for their gestational age. One was bottle-weaned and is now more than a year old, apparently healthy and living on a farm in Pennsylvania.

Flake stressed that the womb-like system isn’t intended to support preemies any younger than today’s limits of viability — not what he calls the more “sensationalistic” idea of artificially growing embryos.

He acknowledged that parents might question the approach, but notes that the preemies always could be whisked into standard care if they fared poorly in the new system. And while he said further adaptation of the device is needed before it can begin human testing, he envisioned parents being able to see the baby and even piping in the sound of mom’s heartbeat.