The 1990s are associated with the introduction of laparoscopic procedures, but a lesser-known technology was introduced at the same time — mini-laparoscopy. “It was very crude, and we did not even have video at the time,” recalled Dr. Paul Wetter, founder and chairman of Society of Laparoendoscopic Surgeons (SLS). As a surgeon, he said it was an exciting concept, especially as the CO2 laser was being introduced in the United States and Japan was starting to release its video technology. But, the tools were not yet strong enough.

John Tushar, president and general manager of Teleflex, agreed: “There was significant hand-over-fist growth in laparoscopy as a whole, because we were inventing every day.” Yet, the metals available at the time were not strong enough to remain rigid during surgery, and other tools, like irrigation and tips, were not customized for the mini-laparoscopy procedures.

For the most part, surgeons have since moved past the 3 mm and smaller instruments. Single site and orifice surgery were the next challenge, and laparoscopy was honed. More than 20 years later, surgeons and suppliers are refocusing back on the mini tools.

Wetter said surgeons have always known smaller incisions were better for patients — limiting the potential for hernias and infection, hastening recovery and causing less cosmetic damage. The advancements in computer design, stronger metals and nanotechnology have made this concept possible. “There’s a lot of advantages to the new generation of mini-laparoscopic instruments,” Wetter said. Since trocars are not needed for rods smaller than 3 mm, the instruments can be inserted like needles, which removes the cost associated with trocars. He added that promising data on outcomes is starting to emerge from Brazil, where some of the instruments were first introduced.

Dr. Maurice Chung, R.Ph, MD, FACOG, FACS, FPMRS, ACGE, president of SLS, agreed. “It takes a little time to adjust to it, but the instruments are much better than in the past, stronger and the optics are better,” he explained. In his practice, limiting patient pain is a priority, and he finds the mini-laparoscopic tools offer an advantage, especially with thinner, smaller patients because tissue damage is reduced.

He uses a combination of mini-laparoscopic and standard laparoscopic tools, depending on the case and patient. “It should be a hybrid of all options,” he added. Wetter says he also uses a combination because quality, high-definition scopes have not been made small enough for the mini instruments. He does not anticipate this will take long though. “(Cellphones have led to the) technology for smaller and smaller cameras with better resolution … in smaller packages with the cost coming down.

It would not be surprising in the next couple years if we start seeing high-resolution, high-quality scopes that small,” he said.

While the technology behind the new instrumentation is becoming more supported with data, one common problem remains – surgeons confuse this version of mini-laparoscopy with the one from the 1980s. “To me that’s part of the hurdle,” Wetter said. “It is getting more popular, but it needs momentum to reach the other surgeons,” Chung agreed. Some companies have tried renaming it, but the name it was introduced by has stuck. Some of the other names include: 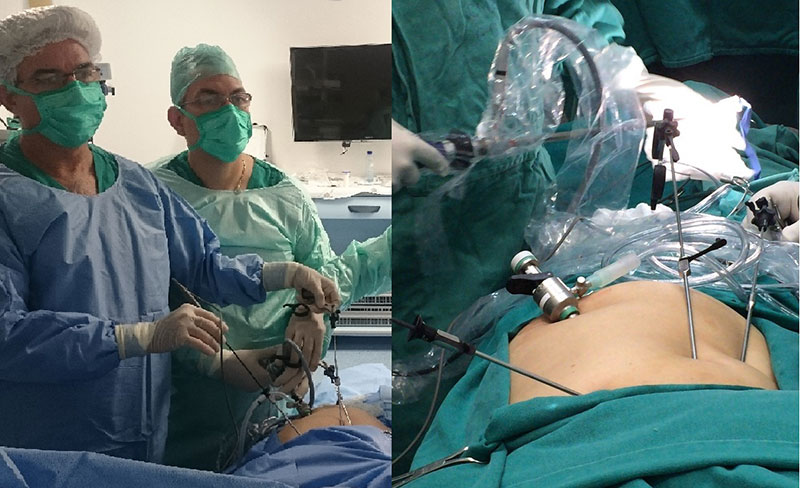 Camran Nezhat, circa 1980, performing videolaparoscopy with one of the early video camera prototypes. (Courtesy of Camran Nezhat)