When paramedics come racing, the last thing anybody is worrying about is where the ambulance was earlier that morning. But traces of those earlier calls could linger — and spread disease. An innovative new product, designed with NASA’s help, aims to sterilize the rig and gear to make it safer for patients and paramedics.

The product uses atomic oxygen and oxidation, two things NASA is familiar with, explains Sharon Miller, a research engineer at NASA’s Glenn Research Center in Cleveland. “I work in space environment testing here at Glenn, and primarily what I do is look at how materials on spacecraft react when they’re in the environment of upper atmospheres of planetary bodies and in space.”

At altitudes above Earth’s breathable atmosphere, atomic oxygen, or unpaired oxygen atoms, is far more prevalent and can be destructive. For example, Miller recalls, the lightweight polymer originally used for the solar array blanket on the International Space Station quickly broke down when exposed to atomic oxygen.

Here on Earth, however, the destructive properties of atomic oxygen can be harnessed for a positive outcome: sterilization. “Atomic oxygen removes any hydrocarbon from a surface,” Miller explains, which includes most infectious material.

Jason Thompson started working as a paramedic more than 20 years ago, but he didn’t start thinking about disinfecting ambulances until 2014. Unfortunately, there just was no protocol for cleaning the ambulance or medical equipment after a call.

But in 2014, the Ebola epidemic brought the question of infectious disease exposure to the forefront, especially for medical personnel who were among the most vulnerable.

Thompson, by then working for Kent, Ohio-based Emergency Products + Research (EP+R), said he and his colleagues quickly realized that Ebola was only the tip of the iceberg. They concluded there needed to be a fast and inexpensive way to sterilize an ambulance and everything in it.

By 2015, EP+R had settled on making a machine that sprayed a mist of a sterilizing chemical, but the team had many questions and didn’t know where to find the answers.

Enter NASA. “If we can help a company make a better product or create new jobs, improve on a process they need help with, those are all part of the goal,” explains Laurel Stauber, senior program specialist at Glenn’s Office of Technology Incubation and Innovation.

Stauber paired EP+R with Miller, and Thompson says the advice made all the difference. “It was a key turning point. We were ready to walk away — really frustrated.”

Miller says the team wasn’t as far from a solution as they thought. “They had a pretty good idea of what they wanted to do, but technically they couldn’t figure out how to get from where they were to the end product,” she recalls.

Among other things, Miller helped EP+R realize that the electrostatic fogger they were considering was potentially a risk for the electronics on the ambulance. She provided advice that helped them move in another direction. 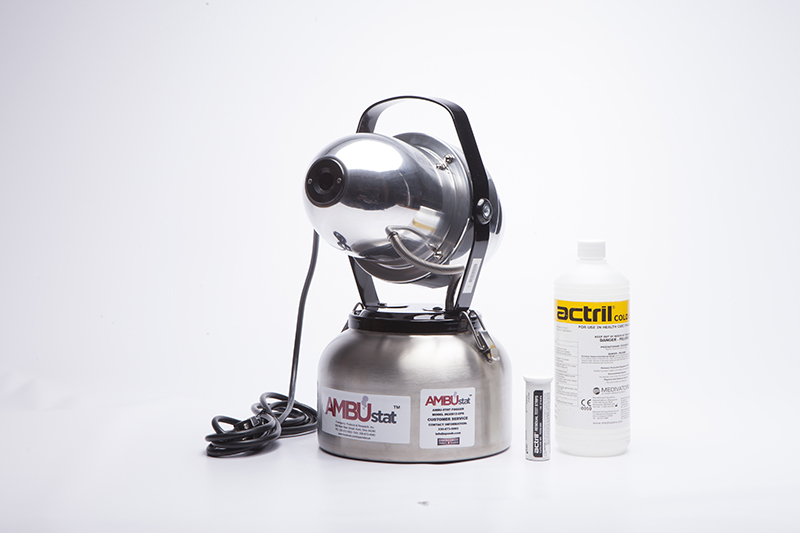 Both are strong oxidizers — which means they easily break down into their component elements and give off an “oxygen radical” or single oxygen atom that looks to react with other atoms. “Microbes are made up of carbon, so their chemical structure is attacked by the oxygen atoms, and their cells are converted with time to harmless vapor by-products,” like carbon dioxide and water vapor, explains Miller.

The chemical reactions take just minutes, Thompson says, and destroy “pretty close to 99 percent of the organisms in that space.”

The units are small and cost just $2,195 for a starter set. Refills cost around $250 per case and provide enough for 24 to 30 treatments, depending on the size of the ambulance.

The first order came from a county in southern Texas after officials read an article in EMS World. “They sent in a blank purchase order — they didn’t know how much it would cost, but they wanted in,” says Thompson. Since then, EP+R has fulfilled orders across the United States and Canada.

Units are also being used in a school in Ohio, as well as in police cars and jail cells, and “now we’re getting courted by an international aid group for Liberia and Sierra Leone,” two of the countries hardest hit by the 2014 Ebola epidemic, Thompson says. “I’m really hopeful. Talk about making a difference around the world.”