One of the nation’s busiest trauma centers began clearing space Monday for the aftermath of Hurricane Harvey even as the storm continued its days-long onslaught of rain.

Ben Taub Hospital personnel transferred a handful of patients to other facilities and took much needed deliveries of food and fresh linens after spending the weekend short-staffed and with dwindling supplies, said Bryan McLeod, a spokesman for the Houston hospital’s parent company, Harris Health System.

The goal was not a full evacuation but to move about 60 of the 350 patients from the 440-bed facility in time to take on new patients once the storm finally moves on the widespread flooding recedes, McLeod said.

“This is setting the table,” he said early Tuesday. “Eventually, when the rain stops, people resume their lives and get back out on the roads, we’re going to see more trauma events.”

Floodwater and sewage got into the basement of the hospital’s main building and affected pharmacy, food service and other key operations for a time.

Heavy rains thwarted plans Sunday to move patients to other hospitals in the Texas Medical Center, a large medical complex southwest of downtown. Only the designated “ride-out team” had been working in the hospital, with water levels around the city too high for additional staff — including the hospital’s chief medical officer — to get in. 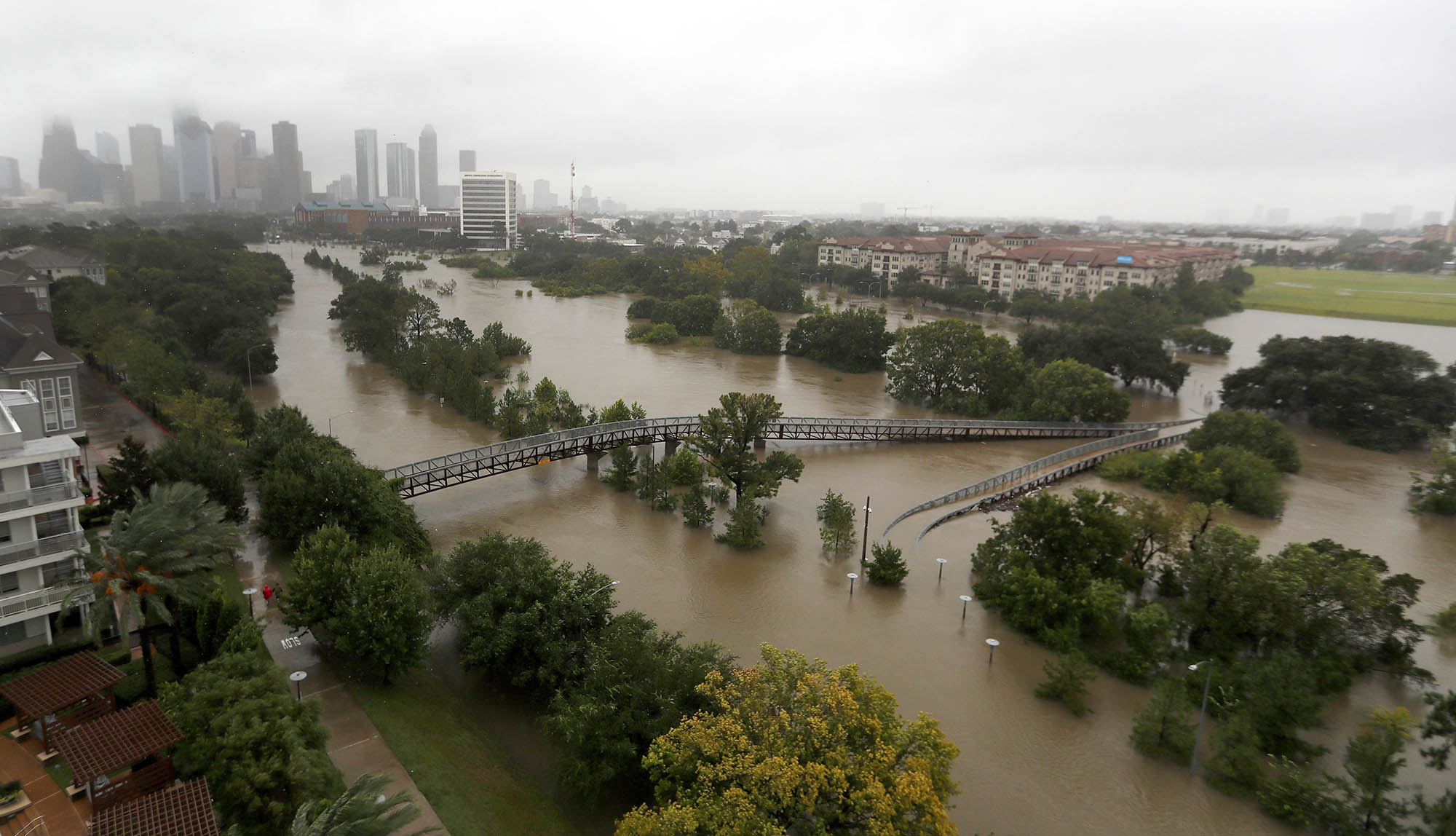 Rain continues to fall in Houston from Tropical Storm Harvey, Monday, Aug. 28, 2017. Floodwaters reached the roof lines of single-story homes Monday and people could be heard pleading for help from inside. (Karen Warren/Houston Chronicle via AP)

The nearby University of Texas MD Anderson Cancer Center also canceled outpatient services, appointments and surgeries at all Houston-area locations through Tuesday, and told patients not to attempt to travel because of high water in the area of the medical complex. Patients who already had been admitted are receiving care as usual, a spokeswoman said.

Other hospitals also bore the brunt of the storm. As of Monday morning, San Antonio Fire Department firefighters had transferred about 800 hospital patients from Houston and other areas affected by Harvey, said department spokesman Woody Woodward. The city had an EMS convoy in Houston consisting of 12 workers, two ambulances and one am-bus — a “gigantic” ambulance with multiple beds, he said.

The situation at Ben Taub briefly raised fears and memories of the dire straits at some New Orleans hospitals where patients were trapped for days after Hurricane Katrina in 2005.

Ben Taub, a large public hospital that cares for many of the city’s poor and uninsured, asked authorities for evacuation help Sunday but new locations for the patients had to be found, said Houston emergency management spokesman Gary Norman. High-clearance vehicles would take patients to other hospitals in the complex and elsewhere in Houston if need be, he said.

Harris Health System operates two other medical facilities — Clinton East, a 50-bed nursing home whose residents were moved Friday to Ben Taub because of concerns Clinton East would flood, and LBJ, a hospital on the northeast side of downtown Houston that now has about 150 people from the community seeking shelter, “another 150 mouths to feed,” McLeod said.

No other Houston hospitals reported serious damage but several canceled outpatient services because of the flooding. West Houston Medical Center spokeswoman Selena Mejia said that the hospital is not offering outpatient services but has admitted a few critical care patients from other city hospitals.

Ben Taub and other hospitals in Houston’s medical complex shored up their defenses after the city was swamped by Tropical Storm Allison in 2001. That storm caused a blackout, inundated medical center streets with up to 9 feet of water, and forced evacuations of patients, some airlifted from rooftops by helicopter. Damage totaled more than $2 billion.

After a review of the area’s flood weaknesses, member hospitals moved their electrical vaults and backup generators out of basements to areas above flood level. Scores of existing buildings were fitted with flood gates, and new buildings were built surrounded by berms. Underground tunnels were outfitted with 100 submarine doors, some 12 feet tall. The $756 million bill was paid by the Federal Emergency Management Agency; millions more were spent on the public works projects.