Martin Lopez was shot in the hand last Saturday by two thieves who made off with his precious cans of gas in the aftermath of Hurricane Maria. He was rushed to Centro Medico, a trauma center in the Puerto Rican capital where in ordinary times he would be quickly treated by surgeons and sent on his way.

But five days later, the 26-year-old cook was still waiting because only a fraction of the operating rooms were available due to an island-wide breakdown in the electrical power grid caused by the storm. He finally got the surgery and the hospital said he was on the mend Friday — but the same can’t be said for Puerto Rico’s badly stressed medical system.

“Thank God I’m fine, I’m getting better,” he told The Associated Press in an air-conditioned medical tent set up by the U.S. Department of Health and Human Services on the grounds of Centro Medico. “But Puerto Rico is destroyed. It’s really sad.”

Of all the problems unleashed by the storm, which roared over the island Sept. 20 as a Category 4 hurricane with winds up to 155 mph, the plight of overtaxed hospitals and smaller clinics — and health care in general — is one of the most worrying for officials grappling with recovery efforts.

The health system in the U.S. territory was already precarious, with a population that is generally sicker, older, and poorer than that of the mainland, long waits and a severe shortage of specialists as a result of a decade-long economic recession. The island of 3.4 million people has higher rates of HIV, asthma, diabetes, and some types of cancer, as well as tropical diseases such as the mosquito-borne Zika and dengue viruses.

In Maria’s wake, hospitals and their employees are wrestling with the same shortages of basic necessities as everyone else. There are people who are unable to keep insulin or other medicines refrigerated. The elderly are particularly vulnerable to the tropical heat as widespread power outages mean no air conditioning. And amid the widespread disruption, it’s often difficult to get kids to a doctor, especially for families who can’t afford to drive long distances on a tank running out of gasoline.

“Whenever there is a disaster that impacts an area to the degree that this one has, then yes, people’s lives are going to be in danger,” said Dr. James Lapkoff, an emergency room doctor in Waynesville, North Carolina, who was part of the HHS team dispatched to Puerto Rico. 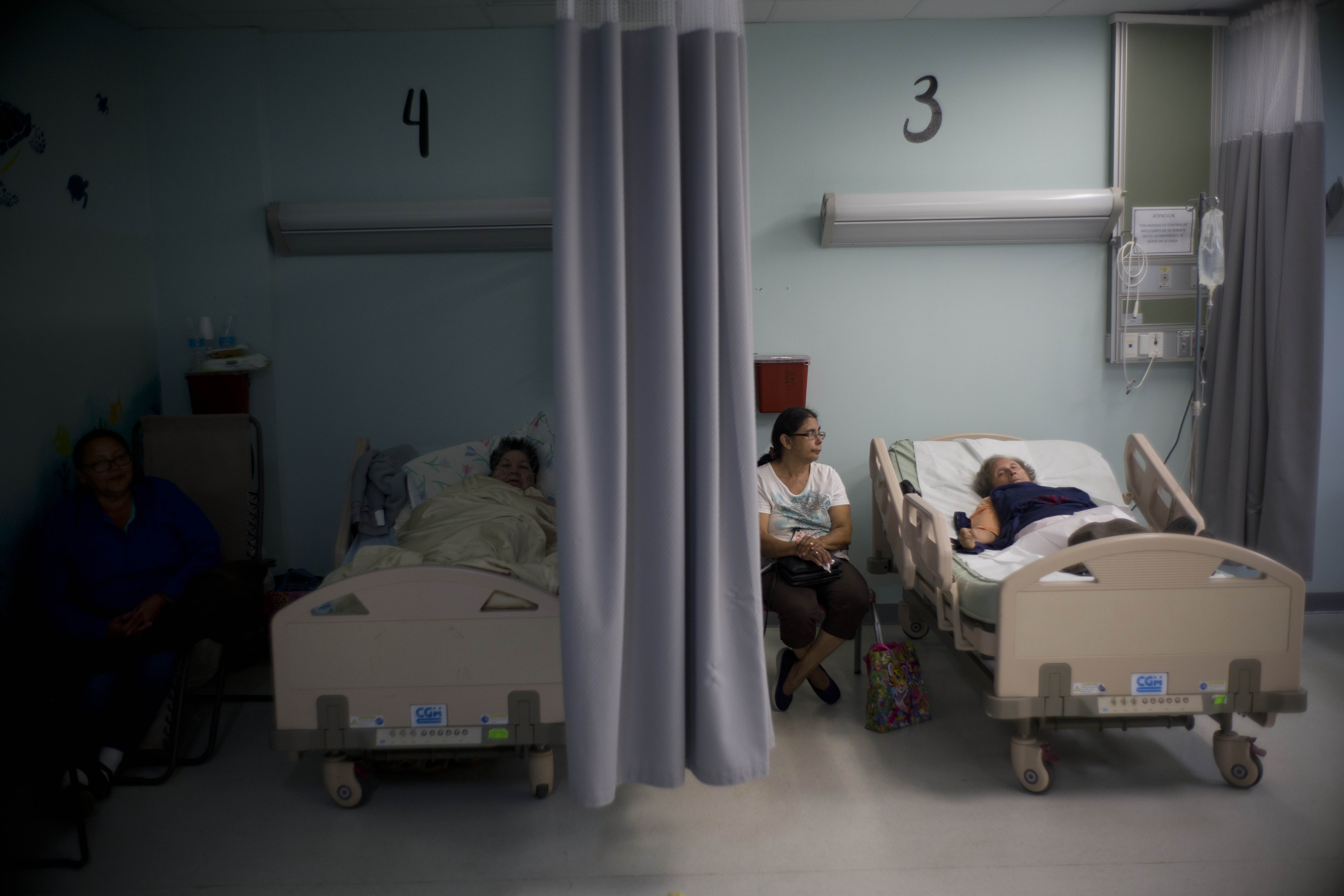 In this Thursday, Sept. 28, 2017 photo, patients lie in their beds at hospital in Catano, Puerto Rico. In Hurricane Maria’s wake, hospitals and their employees are wrestling with the same shortages of basic necessities as everyone else. There are people who are unable to keep insulin or other medicines refrigerated. The elderly are particularly vulnerable to the tropical heat as widespread power outages mean no air-conditioning. (AP Photo/Ramon Espinosa)

Days before the hurricane hit, 56-year-old retired government worker Damaris Torres tried to find a safe place for her son, who has been bedridden for a decade after a traffic accident and depends on a ventilator, oxygen tank and feeding tube.

She has a small generator at home and a battery connected to an inverter as backup, but she didn’t want a rerun of what happened when Hurricane Irma hit just weeks earlier. Back then her son, 30-year-old Manuel Alejandro Olivencia, was transferred to three hospitals in less than 40 hours because his family was told there was no “special place” for someone on a ventilator.

“He’s in such delicate condition,” Torres said, her eyes welling with tears as she recounted how a hospital in the northern fishing town of Catano finally took him in.

That facility relies on a generator, but officials say they constantly worry about running out of fuel.

“Diesel is the one thing everyone is asking for,” Mayor Felix Delgado said as he visited the hospital on a recent morning.

Maria knocked out electricity to the entire island, and only a handful of Puerto Rico’s 63 hospitals had generators operating at full power. Even those started to falter amid a shortage of diesel to fuel them and a complete breakdown in the distribution network.

Patients were sent to Centro Medico and several other major facilities, quickly overwhelming them. The situation is starting to improve, with about half of the hospitals getting direct power or priority shipments of diesel, but that barely addresses the challenges facing the island as a whole.

Jorge Matta, CEO of the nonprofit that runs the complex of hospitals that make up Centro Medico, said progress was being made on restoring power capacity there and finding places to send patients whose homes were destroyed. He said they expected to have all 20 operating rooms at the trauma center back up this weekend. But other parts of the island are in much worse shape.

On Saturday, authorities evacuated dozens of patients at one hospital in the capital of San Juan after its backup generator failed. They were taken to other nearby hospitals already struggling with an overflow of patients.

Metro Pavia, which operates several hospital campuses across the island, warned Friday that it was closing emergency rooms in Arecibo and Ponce because it did not have enough diesel.

“If these things start deteriorating, there’s a significant amount of lives at risk,” he said. “We’re providing care, but it’s not optimal care.”

At the Doctors’ Center Hospital in the northern city of Bayamon, Dr. Victor Rivera said they are so overwhelmed that he has been intercepting patients in the ER waiting room and even outside while people are still in their cars, and sending them on their way with medical advice or a prescription in non-emergency cases.

Only one of the hospital’s four surgery rooms is operating because the others were contaminated when they were used as shelters after Maria ripped off the roof on the fifth floor and blew out the windows on the fourth.

Rivera said the hospital, like many others, is relying on overworked generators.

“They’ve been hit with an enormous amount of work,” he said, noting that the hospital had turned them on earlier during Hurricane Irma and increasingly worries they could fail. “This could potentially be a catastrophe for any hospital.”

With capacity maxed out, he has been sending patients who suffer from asthma, diabetes and other conditions to other hospitals nearby.

Hospitals are struggling to treat a wide variety of conditions in Maria’s wake. The first wave was people with cuts and other wounds sustained in the storm. There are also people like Lopez, who was robbed after waiting in line five hours to buy a rationed supply of gas, who have the type of non-storm-related injuries typically treated at Centro Medico.

The hospital serves as the main trauma center for many around the Caribbean, and when Maria hit, it was already treating patients from the island of St. Maarten who were injured in Hurricane Irma.

Centro Medico and a couple others are also receiving patients from all over Puerto Rico from clinics unable to handle them, straining the system.

Gov. Ricardo Rossello has ordered that all major hospitals be placed on a priority list for receiving diesel.

The U.S. Navy has also dispatched the USNS Comfort, a hospital ship that has been deployed during previous disasters such as the 2010 Haiti earthquake.

The vessel’s sailing plan was a Friday departure from Norfolk, Virginia, with up to five days before it would reach Puerto Rico.