For most of his life, four-year-old Carsten had required a feeding tube for his nourishment. Born with a chromosome abnormality known as translocation, he also had negative experiences with food as an infant. While he seemed to like the taste of food, he just didn’t eat enough to support his growth and development.

But after just six weeks in the feeding disorders program at the Marcus Autism Center, Carsten was able to stop using the feeding tube and now gets all his nourishment by mouth. And that thrills his mom, Lettitia Ussery.

“The program here gave us the structure and the rules to increase the amount that Carsten was eating,” she said. “He’s eating three or four meals a day now, and his teacher feeds him at school. He’s doing really well and seems to be happy with eating. It’s exciting, and a big change for us.”

As many as five percent of children suffer from severe feeding disorders. In many cases, the challenges arise with other health problems leading to negative experiences with food, such as food allergies or reflux disorder. Despite the best efforts of concerned parents, many of these children must be sustained by feeding tubes. Ironically, these interventions may further hinder appropriate feeding patterns and exacerbate an already fragile parent-child mealtime relationship.

At Marcus, which is part of Children’s Healthcare of Atlanta, Dr. Will Sharp is the director of a feeding therapy program that helps these children establish a developmentally appropriate relationship with food. The approach is very successful, but Marcus is one of only a handful of programs in the United States – and the only one in the Southeast – offering this kind of help.

“Traditionally, this kind of therapy is at specialty centers spread out geographically and not available in all communities,” said Sharp, who is also an assistant professor of pediatrics at Emory University. “There are only a handful of really well-known programs.”

Sharp’s therapy depends on a customized protocol determined by each child’s individual response to food. For example, the child’s behavior when one type of food is offered determines which food to try next. The goal is to help each child get past the negative association that led to the feeding disorder in the first place.

Sharp has worked to standardize the Marcus treatment model in an effort to increase access to care. The resulting intervention involves more than 140 possible pathways that were delineated on a paper-based flowchart that only Sharp and his team of trained therapists were able to use. The waiting list of children – and their anxious parents – was long.

About two years ago, Sharp met Leanne West, chief engineer for pediatric technologies in the collaborative research program operated by Children’s and the Georgia Institute of Technology. West heard Sharp’s presentation on the successful therapy program, and saw an opportunity to apply computer technology to the complex decisions that are made in treating the children. 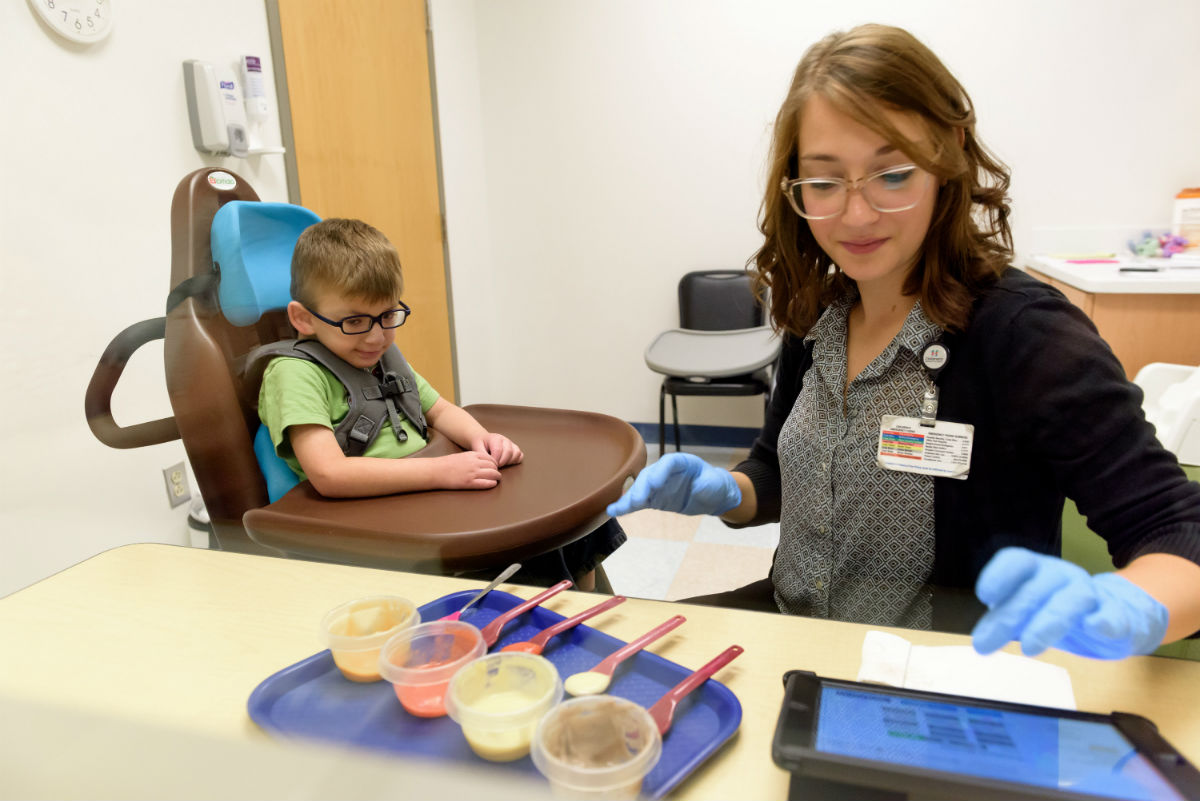 Technician Stefanie Jaskot uses the iEAT app as part of the Marcus Autism Center’s Feeding Disorder Program. The app was developed as part of the Quick Wins program, a project that came out of a collaboration with Children’s Healthcare of Atlanta. (Credit: Rob Felt, Georgia Tech)

The result of their collaboration is iEAT, an app developed for the iPad.

“The idea behind the app is that we bottle up some of the clinical knowledge and techniques into a comprehensive computer program that will allow others to treat children with severe feeding problems in community settings,” explained Sharp. “The goal is to serve many more children than we are able to reach now.”

The app recently underwent a successful clinical trial in which all children exposed to intervention experienced significant improvement in accepting and swallowing food. Carsten was among the first children to use the app in the clinic, and now Sharp hopes to make it available to other clinicians – and to develop a version that parents can use in the home.

“We put the flowchart from his paper-based manual into a computerized decision-support tool,” explained West, who is also a principal research scientist in the Georgia Tech Research Institute (GTRI). “The intelligence behind this program all came from Dr. Sharp’s knowledge developed over years of experience. Using the iPad, we made it easier and faster to use the protocol.”

In addition to helping clinicians decide the next step in feeding therapy, the iPad application, which was written by GTRI research scientist Heyward Adams, also captures information about each treatment session. This data capture reduces the time therapists must spend keeping paper records, and allows them to immediately review a session’s progress with parents.

“It worked, and now they are using it clinically,” said West. “It’s really rewarding to see a child go from negative behavior to keep food out of their mouths to starting to accept food on a spoon. We are very excited about helping Dr. Sharp and his staff make a difference for children and their parents.”

Sharp, West and Adams now hope to develop a version of iEAT that could be used by parents in the home. By combining therapy sessions at the clinic with meal activities at home, they hope to serve even more children and make the program both more convenient and less expensive.

The iEAT app was among the first projects of the “Quick Wins” program established as part of the collaboration between Georgia Tech and Children’s. West says it demonstrates the benefits of bringing doctors together with engineers to develop new solutions to clinical challenges.

“This type of project works because you have a multidisciplinary team in which engineers and scientists work with clinicians,” she said. “When you have people with different training and expertise working together, you can go well beyond what each group could think about on its own.”

For West, whose background is in educational and mobile health technology, the experience of working with Sharp and others at Children’s has been rewarding. “I think this will be truly life-changing for the parents of children with severe feeding disorders,” she said.