In trials with mice, a small implant underneath the skin’s surface has shown to increase the rate of cancer survival by detecting metastatic cancer cells.

The device slows the development of metastatic tumors, allowing patients the opportunity to receive treatment and for it to take effect.

This implant could help in metastatic cancer detection research.

Microporous poly(ɛ-caprolactone) (PCL), a biodegradable material is used to create the scaffold. This material is found in wound dressings. 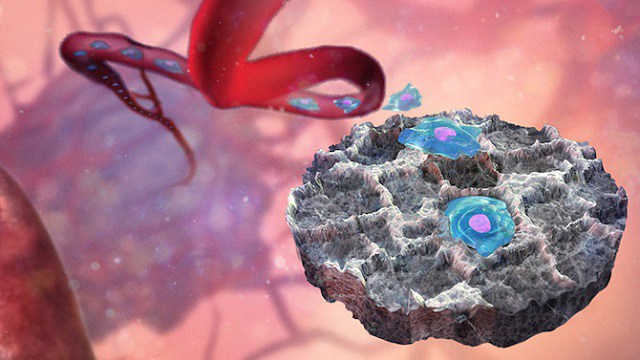 According to Knowridge, the implant is designed to, “Mimic the environment in other organs before cancer cells migrate there. The scaffold attracts the body’s immune cells, and the immune cells draw in the cancer cells. This then limits the immune cells from heading to the lungs, liver or brain, where breast cancer commonly spreads.”

The implant is designed to be monitored with noninvasive imaging. Once cancer cell colonization is detected, it can be removed and patients can receive treatment or another form of intervention.

“Researchers hope that by removing the scaffold and examining the cancer cells within it, they can use precision medicine techniques to target the treatment most likely to have an impact,”says Knowridge.

The researchers emphasize that the system is not a cure, but an early detection and treatment. The scaffold will not cure the cancer.

The team is developing a clinical trial protocol. Until then, researchers would like to see it being used to monitor breast cancer.