People with cancer have tumor DNA in their blood. A new way to quiet background “noise” in the blood sample allows researchers to sequence minute quantities of these molecules to improve diagnosis and treatment.

Researchers at the Stanford University School of Medicine have devised a way to significantly increase the sensitivity of a technique to identify and sequence DNA from cancer cells circulating in a person’s blood.

The hope is that such “liquid biopsies” of easily obtained blood samples could one day replace the need to surgically obtain tumor tissue for study.

The new approach works by identifying errors that occur when tumor DNA is captured from the blood and prepared for sequencing. Removing these errors from the sequencing results allows researchers to more accurately identify true cancer-associated mutations from even very small amounts of starting material.

“Now we can detect even more sensitively the presence of specific mutations in the cancer DNA that could help drive treatment choices or detect the presence of residual cancer,” said Maximilian Diehn, MD, PhD, an assistant professor of radiation oncology and the CRK Faculty Scholar. “We’re getting closer to greatly reducing the need for invasive biopsies to identify tumor mutations or track response to therapies.” 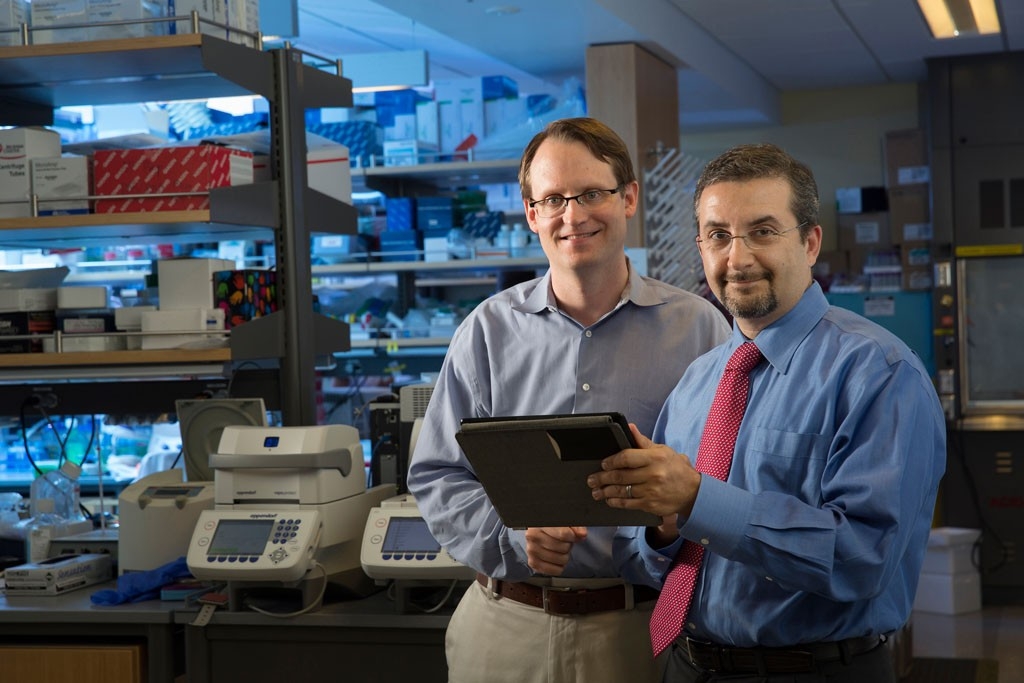 Maximilian Diehn and Ash Alizadeh led a team that improved a method of detecting cancer DNA from blood samples, which may lessen the need for invasive biopsies. (Credit: Mark Tuschman)

Genetic Messages in a Bottle
Even in the absence of treatment, cancer cells are continuously dividing and dying. As they die, they release DNA into the bloodstream, like tiny genetic messages in a bottle. Learning to read these messages — and to pick out the one in 1,000 to 1 million that come from a cancer cell — can allow clinicians to quickly and noninvasively monitor the presence and volume of a tumor, a patient’s response to therapy and even how the tumor mutations evolve over time in the face of treatment or other selective pressures.

The researchers termed their new, two-pronged approach “integrated digital error suppression,” or iDES. It builds upon a method called CAPP-Seq that Alizadeh, Diehn and Newman previously devised to capture very small amounts of tumor DNA from the blood by looking for a panel of mutations known to be associated with a particular cancer. With CAPP-Seq, the researchers were able to detect as few as one tumor DNA molecule in a sea of over 5,000 normal DNA fragments. They published those results in Nature Medicine in 2014.

IDES builds upon CAPP-Seq by addressing an inherent technical limitation: the inability to accurately sequence very small quantities of DNA. Before sequencing can be attempted, many copies must be made of each double-stranded DNA fragment. This copying is known as amplification, and the chance of introducing an error in the sequence during amplification increases with each round.

The researchers needed a way to determine whether mutations identified during the sequencing process came from the tumor or were introduced during the sequencing process. They developed a way to tag circulating double-stranded DNA molecules in the blood with “bar codes” that uniquely mark each original molecule. Because the strands of an individual DNA molecule fit together like a zipper, it’s possible to predict the sequence of one strand from the sequence of the other. The bar codes therefore allowed the researchers to match up the two strands and look for discrepancies. Additionally, their approach was designed to minimize the number of molecules that are lost during bar-coding and sample processing, which is particularly important when analyzing the tiny amounts of circulating DNA present in most cancer patients.

‘A Significant Advance’
“Our technique is a significant advance over prior bar-coding methods because it eliminates more false positives without sacrificing true positives” said Alizadeh. “By tagging DNA molecules at the top of the food chain, so to speak, we can keep track of which molecules have been faithfully reproduced during the sequencing process and which have accumulated errors that were not present in a patient’s tumor or bloodstream.”

They then combined the bar-coding approach with another approach they termed “background polishing.” “We discovered that certain sets of sequencing errors are much more likely to occur at specific places in our DNA molecules, even in healthy subjects,” said Newman. He designed a computer algorithm to scan the data and flag possible trouble spots for further analysis. Together, the molecular bar-coding and polishing technique allowed them to filter out common sequencing mistakes far more efficiently than either technique alone.

Using iDES increases CAPP-Seq’s sensitivity for noninvasively identifying a tumor’s mutations in the blood by about 15 times. Once telltale tumor-specific mutations have been identified, the augmented technique becomes even more precise — detecting as few as one or two tumor DNA sequences among as many as 400,000 nontumor DNA fragments.

“We found that our approach allows highly accurate, noninvasive identification of actionable mutations in lung cancer patients and we are hopeful that the technique will be clinically available soon,” said Diehn, who noted that additional clinical studies will be needed to confirm whether iDES-enhanced CAPP-Seq can improve cancer patient outcomes or reduce health-care costs. Cancer patients in whom biopsies are unsuccessful or too risky are likely to be among the first to benefit from the new approach. Furthermore, iDES-enhanced CAPP-Seq could also be useful in other health-care situations. “These same types of tools could be used to detect rare variants in DNA that could signal transplant rejection and antibiotic resistance or aid in prenatal diagnostic tests,” said Alizadeh.

The team’s work is an example of Stanford Medicine’s focus on precision health, the goal of which is to anticipate and prevent disease in the healthy and precisely diagnose and treat disease in the ill.