Millimeter-long worms digesting a nanoparticle-laced meal of their favorite bacteria could eventually lead to a new way to see cellular forces at play within our own bodies, including processes like wound healing and cancer growth.

The key is that these particular nanoparticles glow when struck by a near-infrared laser and change color depending on the pressure around them. So, they can give off real-time information about the forces they’re undergoing while they’re still inside the worm.

“Altered cellular-level forces underlie many disorders, including heart disease and cancer,” said Jennifer Dionne, associate professor of materials science and engineering at Stanford and one of the principal investigators for this research. “This would be a nanoscale readout that you could use in vitro or in vivo to detect disease at a very early stage.” 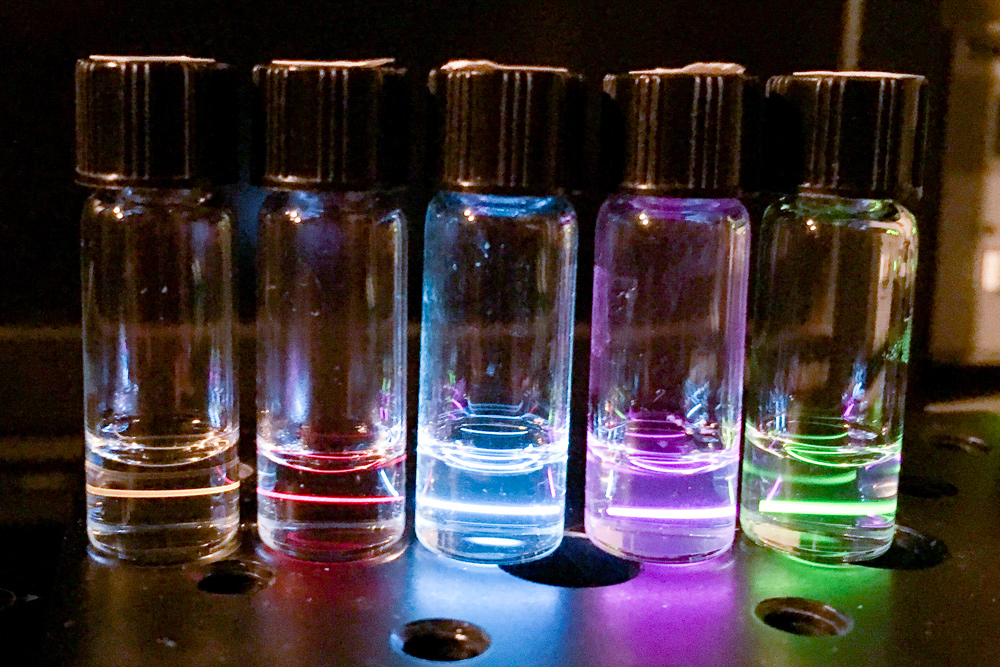 In the Dionne lab at Stanford, a laser causes nanoparticles suspended in cyclohexane to emit light. The nanoparticles change color depending on the pressure around them and give real-time information about the forces they undergo. (Credit: Alice Lay)

Dionne has teamed up with Miriam B. Goodman, a professor of molecular and cellular physiology, through a Stanford Bio-X seed grant, which is specifically awarded to encourage such interdisciplinary partnerships. Goodman studies the mechanics of touch sensation in Caenorhabditis elegans, the worms that are dining on Dionne’s nanoparticles.

Although the ultimate goal of the work is to detect force in human cells, the team is testing its approach in these barely visible worms because, as in humans, digestion in worms involves mechanical gnashing and shoving that can provide insight into how these nanoparticles register cellular force.

“The color that each nanoparticle emits changes from red to orange when there is a mechanical force on the order of nanonewtons to micronewtons – a force range thought to be very relevant for intercellular forces,” said Alice Lay, a graduate student in the Dionne lab who is leading the experiments.

After studying healthy worms, the team will introduce mutations into the mix to discern the role of gene expression on cellular forces. These mutations will allow the team to better understand digestive and related disorders, including acid reflux and hernia formation.

From worm food to human health

We may not want to believe that we have much in common with bacteria-eating worms but this research could influence how we study and understand human touch, digestion, cancer, wound healing, cellular division and differentiation, and, likely, much more.

“Mechanical forces play a significant role in determining the fate and function of a cell or of an organ,” Dionne said. “For example, every time our heart beats, our ears hear or a wound heals, cellular forces are involved.”

The tiny size of the nanoparticles means they have the potential to produce extremely high-resolution force maps, providing a window into the push and pull of and by cells on a deeply subcellular level. Someday, these biocompatible nanoparticles could be ingested or injected into a person in a specific area, such as at a wound site or suspected tumor. Through reading the colors emitted by the nanoparticles, labs could create a force map that indicates the fine-scale activity of the cells around that area.

Adding to Goodman’s previous research on how neurons process the sensation of touch, this technique could also enhance our understanding of the forces involved in sensing the world around us. “More detail about how we experience touch could inform the translation of touch into non-biological systems, like prosthetics,” Goodman said.