Despite Republican resistance to the federal health law, the percentage of Americans without health insurance in 2017 remained the same as during the last year of the Obama administration, according to a closely watched report from the Census Bureau released Wednesday.

However, the uninsured rate did rise in 14 states. It was not immediately clear why, because the states varied dramatically by location, politics and whether they had expanded Medicaid under the federal health law. Those states included Texas, Florida, Vermont, Minnesota and Oregon.

An estimated 8.8 percent of the population, or about 28.5 million people, did not have health insurance coverage at any point in 2017. That was slightly higher than the 28.1 million in 2016, but did not affect the uninsured rate. The difference was not statistically significant, according to the Census report.

About 17 percent of Americans were uninsured in 2010, the year the Affordable Care Act was enacted.

The Census numbers are considered the gold standard for tracking who has insurance because the survey samples are so large. 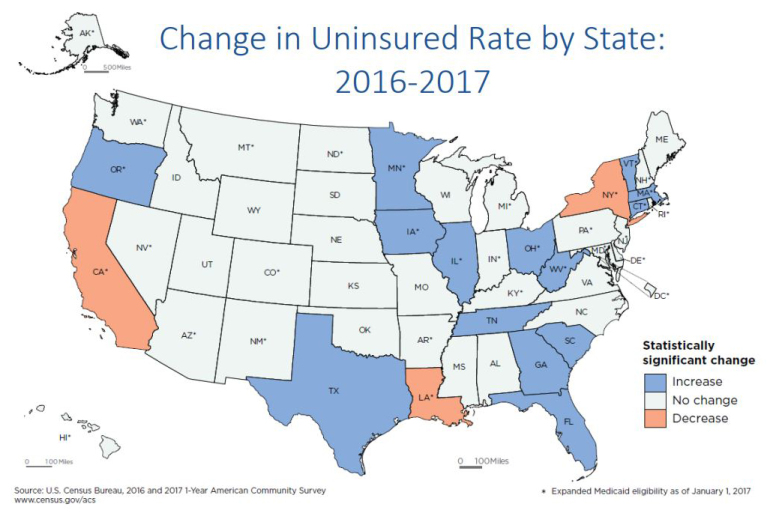 Analysts credit the health law with helping drive down the number of uninsured. But also a factor: The proportion of people without insurance typically falls as unemployment rates decline. That’s because more people can get health coverage at work or can better afford buying insurance on their own.

The nation’s unemployment rate has generally been falling since before 2011 and was 4.1 percent for the last quarter of 2017, the lowest level since before the Great Recession began in December 2007.

Critics of the health law said the report emphasized its deficiencies. “Today’s report is another reminder that Obamacare has priced insurance out of the reach of millions of working families,” Marie Fishpaw and Doug Badger of the Heritage Foundation said in a statement. “Despite a growing economy and very low unemployment rate, the uninsured rate remains virtually unchanged.”

But the law’s supporters instead saw the glass as half full.

“These numbers show the resilience of the Affordable Care Act,” said Judith Solomon, senior fellow at the Center on Budget and Policy Priorities. She said people still value the coverage they receive from the health law even as it’s been under attack by President Donald Trump and Republicans who want to repeal it. “It’s good news because the numbers show the strength of the ACA but bad news in that we have not seen further progress.”

Uninsured rates last year ranged from a high of more than 17 percent in Texas to low of just under 3 percent in Massachusetts.

West Virginia had one of the sharpest increases in uninsured.

About 14 percent of the state’s residents were uninsured in 2013 before the ACA’s premium subsidies and Medicaid expansion began. That rate fell by nearly two-thirds by 2016. Last year, however, West Virginia’s uninsured rate crept up 0.8 percentage points to 6.1 percent, according to the Census report.

This screen grab shows the main page of the healthcare.gov website in Washington, on Monday, May 21, 2018. (Image credit: HealthCare.gov via AP)

Carol Bush, 58, of Elkins, W.Va., expects to lose coverage Oct. 1 because her job is ending.

It’s an unfortunate irony: Elkins has served for the past three years as a navigator helping people in her community find coverage in the health law marketplaces. Federal officials have largely scrapped that program.

The Trump administration cut funding by more than 80 percent during the past two years, saying it had no proof that navigators were helping people find coverage. Only if consumers signed up in the presence of the navigator was a session considered a success.

Bush had coverage through the University of West Virginia, which has a navigator contract that ends at the end of this month. Without employer coverage, Bush said, the cheapest insurance she could find would be about $1,100 a month. She won’t qualify for a federal subsidy to lower her premium because of her family’s income. Her husband is insured through Medicare.

Although she said she has strongly considered going without insurance because of the cost, she knows she needs it.

“In all honesty, I’ve always had some kind of health insurance, and the thought of being without it worries me,” she said. “I can’t risk getting seriously ill and incurring enormous debt at this point in my life. Peace of mind has a value too.”

Shenandoah Community Health Center, a federally funded health clinic in Martinsburg, W.Va., has started to see an increase in uninsured patients the past year, although it’s still below levels it saw before the health law’s coverage expansion began in 2014, said CEO Michael Hassing. Hassing said he believes many patients have dropped coverage, thinking the ACA’s individual mandate was repealed.

While the GOP failed last year to repeal the law, Congress was able to strip out one of its key features — the individual penalty for not having coverage. The vote last December eliminated that penalty starting in 2019 — meaning Americans are still required this year to have health coverage or face the consequences on their 2018 taxes.