The burgeoning field of optogenetics has seen another breakthrough with the creation of a new plant-human hybrid protein molecule called OptoSTIM1. In South Korea, a research team led by Won Do Heo, associate professor at the Korea Advanced Institute of Science and Technology (KAIST) and group leader at the IBS Center for Cognition and Sociality, together with Professor Yong-Mahn Han and Professor Daesoon Kim, have refined the process for precision control of cellular calcium (Ca2+) channels in living organisms with their new OptoSTIM1 molecule.

Calcium ions are a crucial part of diverse cellular functions such as contraction, excitation, growth, differentiation and death. Severe Ca2+ deficiency is linked to cardiac arrhythmia, cognitive impairment, and ataxia. 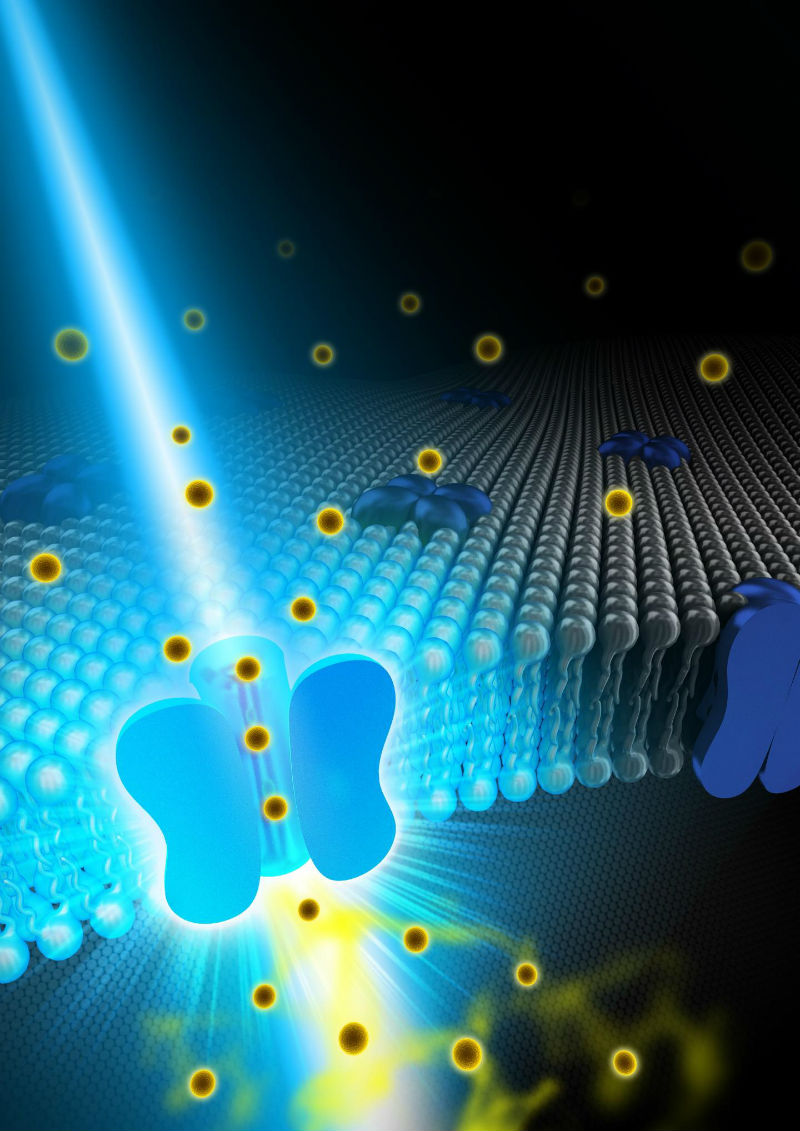 This is an artist’s representation of a Ca2+ channel affected by OptoSTIM1. (Credit: Institute for Basic Science)

In optogenetics, a light-sensitive plant photoreceptor and an animal protein that affects cell membrane ion channels, bind together and are introduced to target cells. They work together and respond to a stimulus from a particular wavelength of light to open (or close) a particular ion channel.

Previous attempts at precision control of calcium channels using drugs and electrical stimulation were not accurate enough for meaningful results. What revolutionized the process of specified Ca2+ channel control was the invention of the field of optogenetics.

In their optogenetic application, the Korean team used a photoreceptor protein called cryptochrome 2 (Cry2) from a small, flowering plant Arabidopsis thaliana, and combined it with the STromal Interaction Molecule 1 (STIM1), a protein found in almost all animals, which opens cellular Ca2+ channels. This resulted in a hybrid molecule that they named OptoSTIM1.

When they introduced a blue light to the OptoSTIM1 expressing cells, they were able to coax them to open their Ca2+ channels and allow an influx of calcium ions from outside the cell. The amount of Ca2+ which cells took up surpassed previous experiments due to OptoSTIM1 being more efficient than previous optogenetic molecules. Cry2 has a natural affinity for clustering under blue light. According to researcher Taeyoon Kyung, “Our method worked better because other plant proteins are not as efficient as Cry2 at clustering”. In fact, this clustering resulted in 5-10 times more detected Ca2+ than in previous studies. 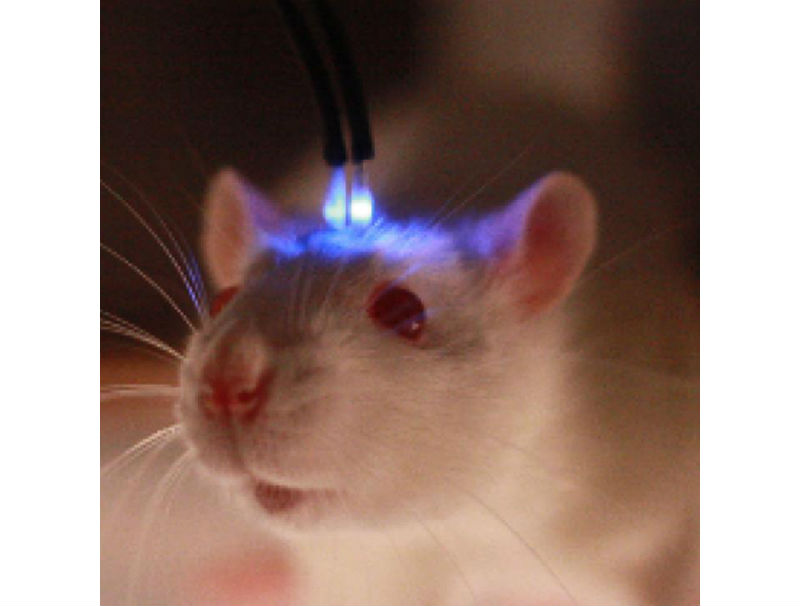 Increasing Learning Capacity in Mice
To test what they could do with a living cell, the researchers expressed zebrafish embryos with OptoSTIM1. After exposure to the blue light, the expressing cells showed signs of Ca2+ uptake while the others did not.

They next explored the idea of intercellular Ca2+ signaling. To do this, they tested human embryonic stem cells by exposing blue light to only a single cell in a colony which expressed OptoSTIM1. Despite only one cell being illuminated with blue light, they detected a Ca2+ delayed response in other, more distant and also non-illuminated cells indicating some level of intercellular communication.

Ca2+ release and uptake also plays an important role in brain cells and their functions, so the researchers explored Ca2+ modulation’s effect on memory. The hippocampus controls memory so the scientists first tested cultured hippocampal cells expressing OptoSTIM1, and a Ca2+ influx was achieved when the cells were exposed to blue light.

Building on previous mice memory studies and their success with cultured hippocampal cells, they introduced OptoSTIM1 to the hippocampus of a living mouse. To test the functional effect of the Ca2+ influx, the IBS team compared sets of light-illuminated mice to non-illuminated mice expressing OptoSTIM1 in an environment where they introduced a conditioning cue followed by a fear stimulus. In subsequent tests they observed that light-illuminated mice with the OptoSTIM1 expression had a greater fear response when placed in the testing environment without the conditioning cue than the non-light-stimulated mice. In fact, they had a nearly twofold increase in fear stimulus response memory compared to non-light-stimulated mice, indicating that the OptoSTIM1 expression (and resultant Ca2+ uptake) was an effective method for memory enhancement.

Neurological Enhancements and Treatments
This work opens the door for future research into optogenetically enhanced memory and learning studies. More importantly, some neurological diseases which are a result of a dysfunction in Ca2+ regulation could be affected by optogenetically controlling the Ca2+ channels in the brain. This may also be a step towards discovering applications for drugs as well as therapeutic Ca2+ modulation. According to Kyung, “There are diseases that result from dysfunction in cellular Ca2+ regulation, such as Alzheimer’s disease, so we can apply our system to those areas and hopefully in the near future help people to recover from those diseases.” This may also allow for future non-invasive and non-drug treatments or may help to mitigate and eventually cure some neurological diseases.