The part of the jawbone containing tooth sockets is known as alveolar bone, and its loss over time or following dental disease may ultimately result in tooth loss. While dentures can be used as a tooth replacement, the mechanical stimuli under the dentures causes further bone loss. An alternative and more permanent solution is strongly hoped for.

Recombinant human bone morphogenetic protein 2 (BMP-2) has been used to stimulate osteogenesis (bone formation) in humans, but high levels can cause inflammation and tumor development. Therefore, agents such as peptide drugs for accelerating bone augmentation need to be developed, even in the presence of lower levels of BMP-2. Additionally, there are no known means of stimulating local bone augmentation without performing surgery. 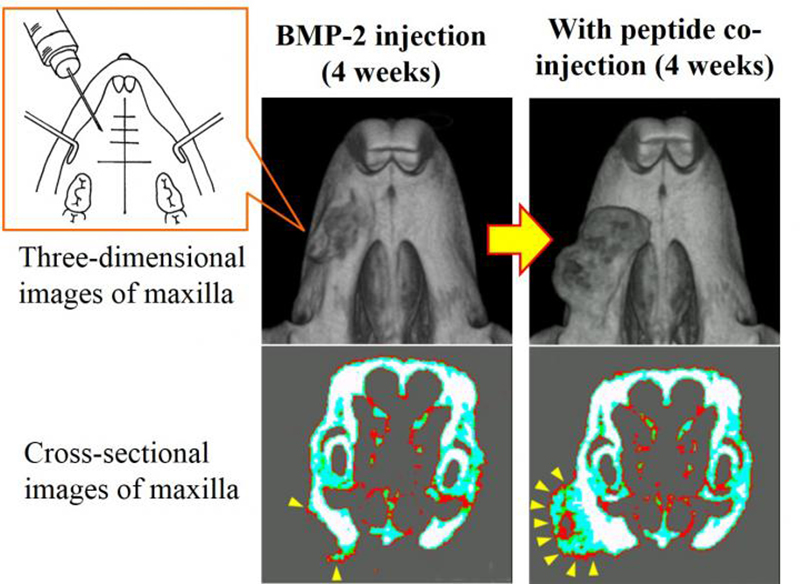 The peptide OP3-4 has been shown to inhibit bone decay and stimulate the differentiation of cells (osteoblasts) that form bone. Now, an international team centered at Tokyo Medical and Dental University has injected a gelatin-based gel carrying OP3-4 and BMP-2 into mice jawbones to trigger local augmentation of bone around the injection site.

Use of this injectable gelatin-based gel to carry the agents avoids the need for surgical implantation and resulted in no swelling or other such complications in the experimental mice. The researchers observed a region of increased bone mass around the BMP-2 + OP3-4 injection site that was larger than that seen in mice injected with BMP-2 alone, or with other controls. This mass also had a significantly higher bone mineral content and density.