Alison Wrenne was making waffles for her two young children one morning when abdominal pain forced her to the floor. A neighbor who is a physician assistant urged her to go to the emergency room.

Wrong decision, according to her health insurer. Wrenne was diagnosed with a ruptured ovarian cyst, but Anthem said that wasn’t an emergency and stuck her with a $4,110 bill.

“How are you supposed to know that?” says the 34-year-old from Lexington, Kentucky. “I’m not a doctor … that’s what the emergency room is for.”

In an effort to curb unnecessary and costly ER visits, the Blue Cross-Blue Shield insurer has told customers in a few U.S. states to go to the hospital only in a real emergency such as a heart attack, stroke, and major bleeding — or they could wind up footing the bill.

Anthem, the nation’s second-largest insurer, wants patients to consider alternatives like drugstore clinics, nurse advice hotlines or telemedicine. Insurers for years have been raising ER co-payments to try to deter unnecessary — and expensive — visits, and Anthem’s policy marks another round in this long-standing fight.

Even doctors agree the ER — an important revenue source for hospitals — isn’t the best option for minor complaints like sinus infections, rashes or ankle sprains. They say it’s better in those cases to see a family doctor who knows a person’s medical history.

But some also worry that Anthem’s clampdown will scare patients away from the ER in an actual emergency, especially in cases where major problems may not seem serious at first. 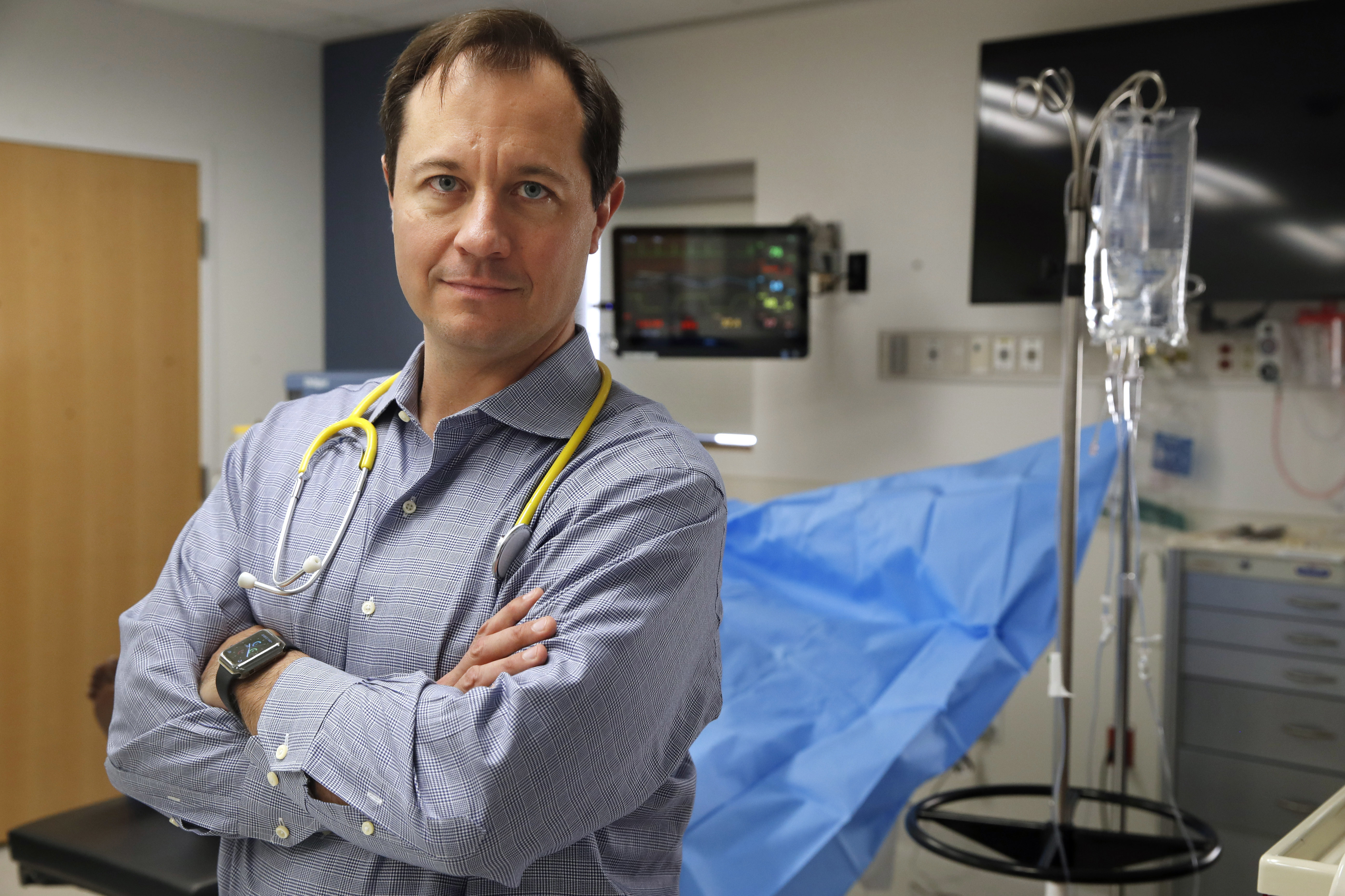 In this Tuesday, Oct. 17, 2017, photo, Dr. Jesse Pines poses for a portrait at the George Washington University School of Medicine & Health Sciences Clinical Learning and Simulation Skills (CLASS) Center in Washington. Pines teaches emergency medicine at the school and also does a rotation in the hospital’s emergency room. A push by the insurer Anthem to limit ER visits to true emergencies worries doctors and patients who question whether they will make the right call or get stuck with a bill. “I think it’s completely unfair to patients,” said Pines. “It runs the risk of really hurting some people.” (AP Photo/Jacquelyn Martin)

Customers in Missouri and Georgia received letters earlier this year from Anthem warning them that minor complaints should be checked out at places like clinics or urgent care centers, where visits can cost $85 and $190, respectively. By comparison, Anthem says a typical ER visit costs around $1,200.

The ER should be used “as it was designed — to treat life-threatening illness,” says Dr. Craig Samitt, Anthem’s chief clinical officer. “This is in no way meant to compromise a member’s determination of whether they’ve got an emergency.”

The push began in 2015 in Kentucky and will expand to Indiana next year and possibly other states that have seen a rise in unnecessary visits. Those involve “common medical ailments” that the average person knows should not be seen in an emergency room, according to Samitt.

Indianapolis-based Anthem Inc. says it wants to steer patients into using the right locations for their care. It has a similar policy for MRIs that pushes some patients away from getting scans at more expensive hospital locations.

There are many exceptions to the ER rule: Patients won’t get dinged when there isn’t an urgent care center nearby, if they need help on a Sunday or major holiday, if a doctor recommends going to the ER or if someone is under age 14.

Samitt also says Anthem isn’t simply rejecting every non-urgent ER claim it receives. The insurer has a physician review a case before issuing a denial, and will consider a patient’s circumstances. Anthem said it may cover a patient who arrives with chest pains that turn out to be indigestion instead of a heart attack.

However, hospital officials in Missouri say many of Anthem’s reviews haven’t been this thorough. The insurer has rejected some claims in only a couple days and hasn’t requested patient records before making a decision, said Daniel Landon, a senior vice president with the Missouri Hospital Association.

U.S. emergency department visits are expected to climb to around 150 million this year, up from 141.4 million in 2014. The rise is due partly to coverage expansions under the Affordable Care Act, an aging population and an increase in opioid overdoses, according to the American College of Emergency Physicians.

Other insurers also review ER use but not as aggressively as Anthem, says Laura Wooster of the emergency doctor group. The group has asked Anthem to stop immediately.

“I would hope that other insurers would take a look at this … and realize it’s a dangerous enforcement mechanism to consider,” she says.

Anthem spokeswoman Joyzelle Davis said the insurer has met with representatives of the doctor group, but it has no plans to stop its program.

Anthem said it has seen a drop in unnecessary ER visits in Kentucky since it started its review there and has rejected only around 1 percent of all claims as avoidable.

In Wrenne’s case, the letter from Anthem said: “We do not believe that a person with an average knowledge of health and medicine would think that this needed care right away” to avoid a serious problem. The insurer said she could have been treated safely in a doctor’s office or clinic.

The hospital whittled Wrenne’s bill down to several hundred dollars. But now she’s nervous about using the ER again.

“It’s just frustrating to be a reasonable person and have to weigh the cost of … going to the ER or not because you have no idea what the bill would be,” she says.

Judy Kurtz also is worried about future emergency care. The 62-year-old Maysville, Kentucky, resident was hit with a $1,600 bill a couple years ago after the insurer rejected an ER visit.

A doctor had told her to seek emergency help after an antibiotic reaction made her throat and face swell. She says Anthem eventually paid the claim. But it took about a dozen phone calls and six months to get the insurer to change its mind.

The retired school teacher doesn’t want to go through that again and has set a high bar for going to the ER.