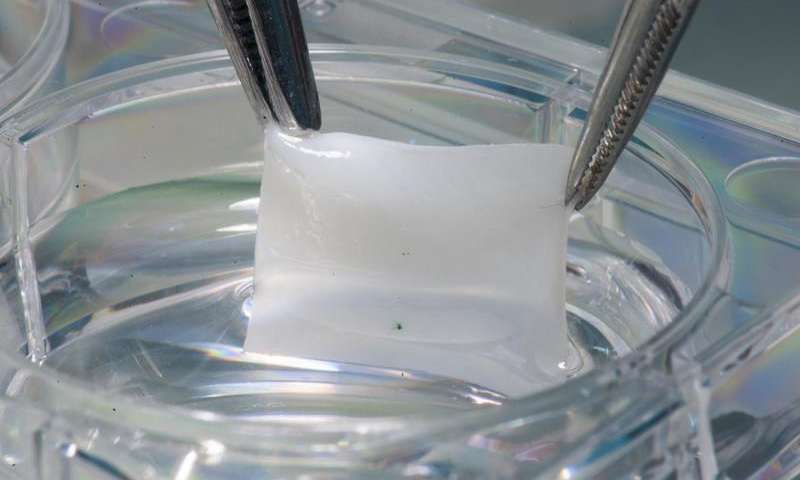 Medical products, packaging and food can be safely and efficiently sterilized with electron beams. In the future, Fraunhofer researchers also plan to use accelerated electrons to eliminate germs from tissue transplants and to change the properties of the organic material in the process.

It is essential that medical cannulas, disposable syringes, dialysis tubes and also pharmaceutical packaging are germ-free. A proven procedure for killing bacteria, viruses, funguses, spores and so on is to sterilize using electron beams. This involves penetrating the material with accelerated, high-energy electrons. Researchers at the Fraunhofer Institute for Organic Electronics, Electron Beam and Plasma Technology FEP in Dresden successfully apply this method, for instance to eliminate harmful organisms from seed; it takes a few milliseconds to destroy the pests’ DNA, thereby turning off their ability to reproduce. Now the scientists are turning their expertise toward new application areas: they are studying the feasibility of using non-thermal electron-beam technology to sterilize and modify organic tissue, which could open up entirely new medical treatment options.

“Under atmospheric pressure and at temperatures below 40 degrees, we treat tissue samples using electrons accelerated to the point at which they can penetrate the material. This is known as low-energy electron-beam processing,” explains Dr. Jessy Schönfelder, head of the Working Group on Medical Applications at Fraunhofer FEP. This non-destructive method offers clear advantages. Since the working depth can be adjusted so that only the outer surface layer is sterilized, the tissue does not heat up and the cells remain intact. By using the REAMODE (reactive modification with electrons) laboratory unit, the scientists can tailor the low-energy electron-beam technology to all kinds of applications, adjusting such parameters as penetration depth and intensity. 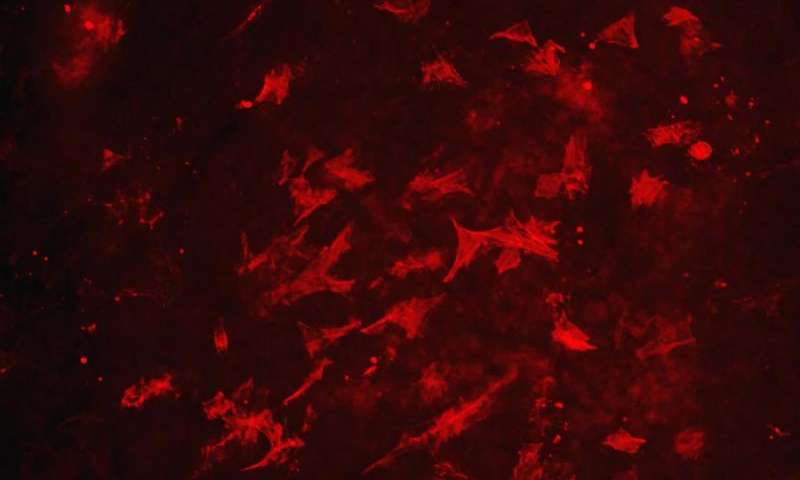 Human fibroblast cell sample, cultured on a porcine pericardium that was chemically cross-linked with glutaraldehyde. As a reaction to the residue from the toxic chemical, relatively few cells grow. (Credit: Fraunhofer FEP)

With accelerated electrons, the researchers can purposefully manipulate material properties and bring about changes in the tissue. For their experiments, they selected the porcine pericardium as the basis for their biological model. These are commonly used in biological heart valve prosthesis, but such implants last only for a maximum of 15 years. This is because cross-linking the tissues requires the use of the chemical compound glutaraldehyde, which in the medium term results in calcification of the organic implant. “Accelerated electrons are an interesting alternative because of their ability to split chemical bonds and facilitate cross-linking,” explains Schönfelder. In their experiments, Schönfelder and her team were able to verify the cross-linking of collagen molecules or, in other words, peptide chains.

To verify the cell tolerance to electron-beam sterilization, the researchers cultured cells on different samples. Only a small number of cells grew on the tissue treated with the toxic glutaraldehyde. But on the cultures modified with electron beams, significantly more cells grew and could also reproduce. On untreated tissue samples, even fewer cells colonized the surface as compared to the samples treated with electrons.

Using aortas from animals, the researchers also carried out successful experiments with vascular grafts. “To treat patients with vascular disorders using synthetic prostheses made from polymers to replace blood vessels is unavoidable. Because of the danger of thrombosis, the diameter is limited to six millimeters. For blood vessels narrower than six millimeters, the only option is to use organic implants,” says Schönfelder. Sterilizing them is problematic. The muscle and endothelial cells in the inner layers of the blood vessels must not be damaged. Since the researchers have the means to set the optimum penetration depth of the electrons in the blood vessel walls and sterilize only the outer layer of the aorta, the cells remain functional. The penetration depth during tests was to 23 micrometers, which is in the outermost connective tissue layer. “At a radiation dose of 22 kilogray (kGy), the blood vessel functions are not compromised. At the same time, the bacteria deposited on the specimens are reliably eliminated within a few seconds,” says Schönfelder. The low acceleration energy facilitates the electron treatment device’s compact design. This, combined with the high treatment speed, makes the method ideal for use in tissue banks or the operating room. In a next step, the experts are planning to optimize the process and build a custom sterilization device.