Els van der Heijden, who has cystic fibrosis, was finding it ever harder to breathe as her lungs filled with thick, sticky mucus. Despite taking more than a dozen pills and inhalers a day, the 53-year-old had to stop working and scale back doing the thing she loved best, horseback riding.

Doctors saw no sense in trying an expensive new drug because it hasn’t been proven to work in people with the rare type of cystic fibrosis that van der Heijden had.

Instead, they scraped a few cells from van der Heijden and used them to grow a mini version of her large intestine in a petri dish. When van der Heijden’s “mini gut” responded to treatment, doctors knew it would help her too.

“I really felt, physically, like a different person,” van der Heijden said after taking a drug — and getting back in the saddle.

This experiment to help people with rare forms of cystic fibrosis in the Netherlands aims to grow mini intestines for every Dutch patient with the disease to figure out, in part, what treatment might work for them. It’s an early application of a technique now being worked on in labs all over the world, as researchers learn to grow organs outside of the body for treatment — and maybe someday for transplants.

So far, doctors have grown mini guts — just the size of a pencil point — for 450 of the Netherlands’ roughly 1,500 cystic fibrosis patients.

“The mini guts are small, but they are complete,” said Dr. Hans Clevers of the Hubrecht Institute, who pioneered the technique. Except for muscles and blood vessels, the tiny organs “have everything you would expect to see in a real gut, only on a really small scale.”

These so-called organoids mimic features of full-size organs, but don’t function the same way. Although many of the tiny replicas are closer to undeveloped organs found in an embryo than adult ones, they are helping scientists unravel how organs mature and providing clues on how certain diseases might be treated. 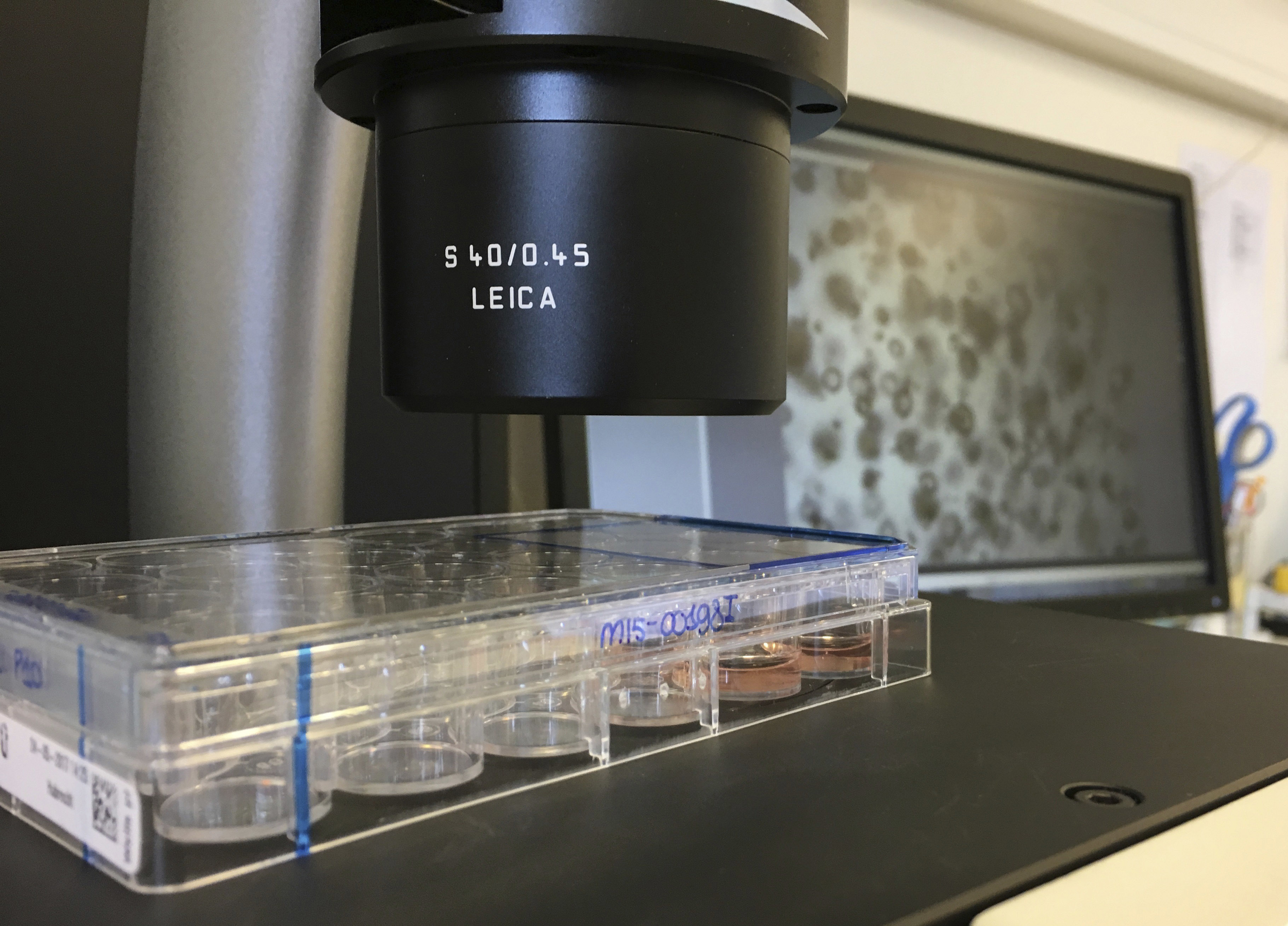 Samples of mini organs are magnified with microscope at the Hubrecht Institute in Utrecht, Netherlands on Monday, May 29, 2017. Doctors in the Netherlands are aiming to grow mini intestines for cystic fibrosis patients to figure out what drugs might work for them. (AP Photo/Aleksandar Furtula)

In Australia, mini kidneys are being grown that could be used to test drugs. Researchers in the U.S. are experimenting with tiny bits of livers that might be used to boost failing organs. At Cambridge University in England, scientists have created hundreds of mini brains to study how neurons form and better understand disorders like autism. During the height of the Zika epidemic last year, mini brains were used to show the virus causes malformed brains in babies.

In the Netherlands, the mini guts are used as a stand-in for cystic fibrosis patients to see if those with rare mutations might benefit from a number of pricey drugs, including Orkambi. Made by Vertex Pharmaceuticals, Orkambi costs about 100,000 euros per patient every year in some parts of Europe, and it’s more than double that in the U.S., which approved the drug in 2015. Despite being initially rejected by the Dutch government for being too expensive, negotiations with Vertex were reopened in July.

Making a single mini gut and testing whether the patient would benefit from certain drugs costs a couple of thousand euros. The program is paid for by groups including health insurance companies, patient foundations and the government. The idea is to find a possible treatment for patients, and avoid putting them on expensive drugs that wouldn’t work for them.

About 50 to 60 patients across the Netherlands have been treated after drugs were tested on organoids using their cells, said Dr. Kors van der Ent, a cystic fibrosis specialist at the Wilhelmina Children’s Hospital, who leads the research.

Clevers made a discovery about a decade ago that got researchers on their way. They found pockets of stem cells, which can turn into many types of other cells, in the gut. They then homed in a growing environment in the lab that spurred these cells to reproduce rapidly and develop.

“To our surprise, the stem cells started building a mini version of the gut,” Clevers recalled. 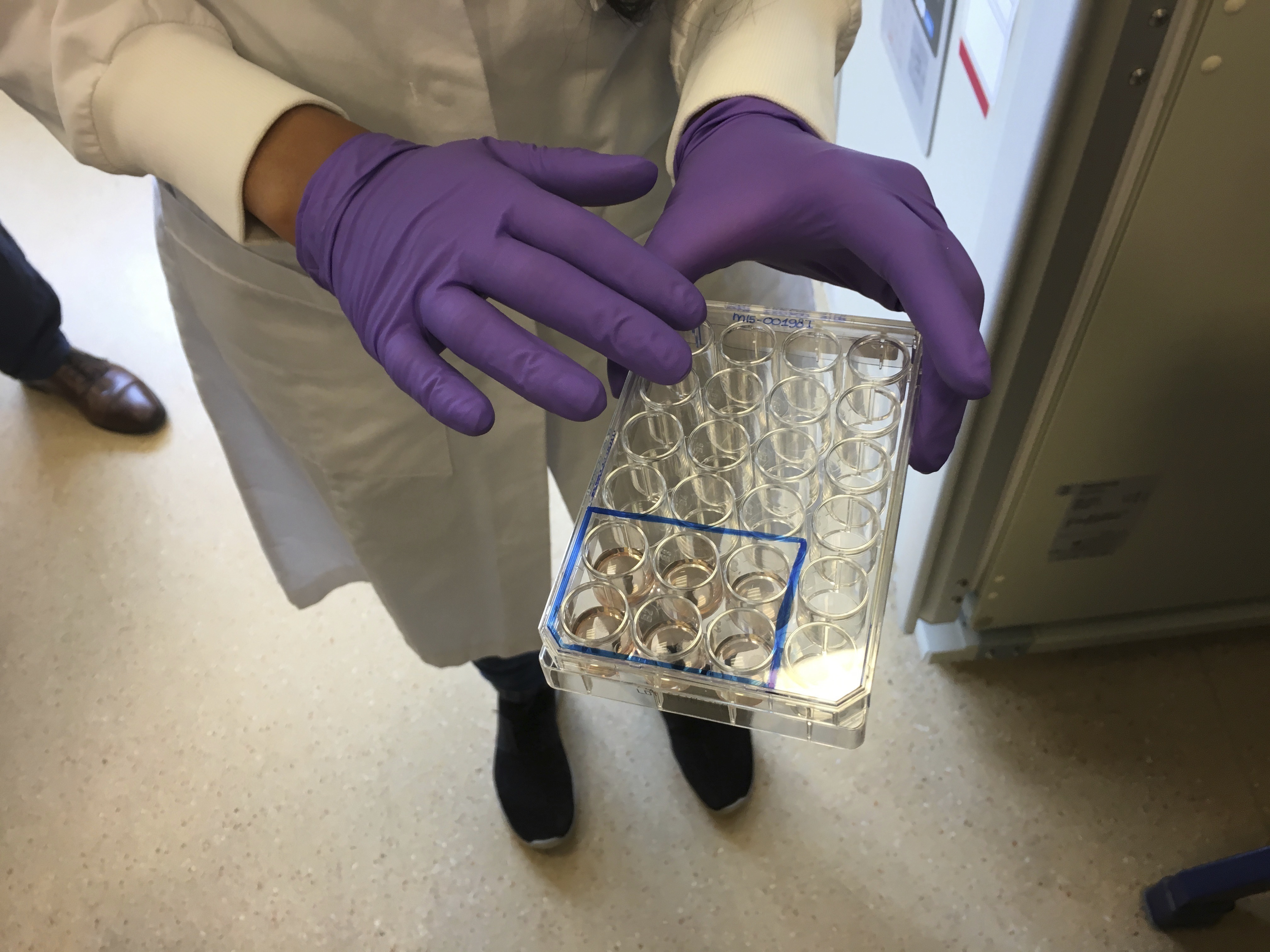 Samples of mini organs are magnified with microscope at the Hubrecht Institute in Utrecht, Netherlands on Monday, May 29, 2017. Doctors in the Netherlands are aiming to grow mini intestines for cystic fibrosis patients to figure out what drugs might work for them. (AP Photo/Aleksandar Furtula)

Cystic fibrosis is caused by mutations in a single gene that produces a protein called CFTR, responsible for balancing the salt content of cells lining the lungs and other organs.

To see if certain drugs might help cystic fibrosis patients, the medicines are given to their custom-made organoids in the lab. If the mini organs puff up, it’s a sign the cells are now correctly balancing salt and water. That means the drugs are working, and could help the patient from whom the mini gut was made.

Researchers are also using the mini guts to try another approach they hope will someday work in people — using a gene editing technique to repair the faulty cystic fibrosis gene in the organoid cells.

Other experiments are underway in the Netherlands and the U.S. to test whether organoids might help pinpoint treatments for cancers involving lungs, ovaries and pancreas.

While the idea sounds promising, some scientists said there are obstacles to using mini organs to study cancer.

Growing a mini cancer tumor, for example, would be far more challenging because scientists have found it difficult to make tumors in the lab that behave like in real life, said Mathew Garnett of the Wellcome Trust Sanger Institute, who has studied cancer in mini organs but is not connected to Clevers’ research.

Also, growing the cells and testing them must happen faster for cancer patients who might not have much time to live, he said.

Meanwhile, Clevers wants to one day make organs that are not so mini.

“My dream would be to be able to custom-make organs,” he said, imagining a future where doctors might have a “freezer full of livers” to choose from when sick patients arrive.

Others said while such a vision is theoretically possible, huge hurdles remain.

“There are still enormous challenges in tissue engineering with regards to the size of the structure we’re able to grow,” said Jim Wells, a pediatrics professor at the Cincinnati Children’s Hospital Medical Center. He said the mini organs are far smaller than what would be needed to transplant into people and it’s unclear if scientists can make a working, life-sized organ in the lab.

There are other limitations to growing miniature organs in a dish, said Madeline Lancaster at Cambridge University.

“We can study physical changes and try to generate drugs that could prevent detrimental effects of disease, but we can’t look at the complex interplay between organs and the body,” she said.

For patients like van der Heijden, who was diagnosed with cystic fibrosis as a toddler, the research has helped her regain her strength. Vertex agreed to supply her with the drug.

“It was like somebody opened the curtains and said, ‘Sunshine, here I am, please come out and play.'” she said. “It’s strange to think this is all linked to some of my cells in a lab.”