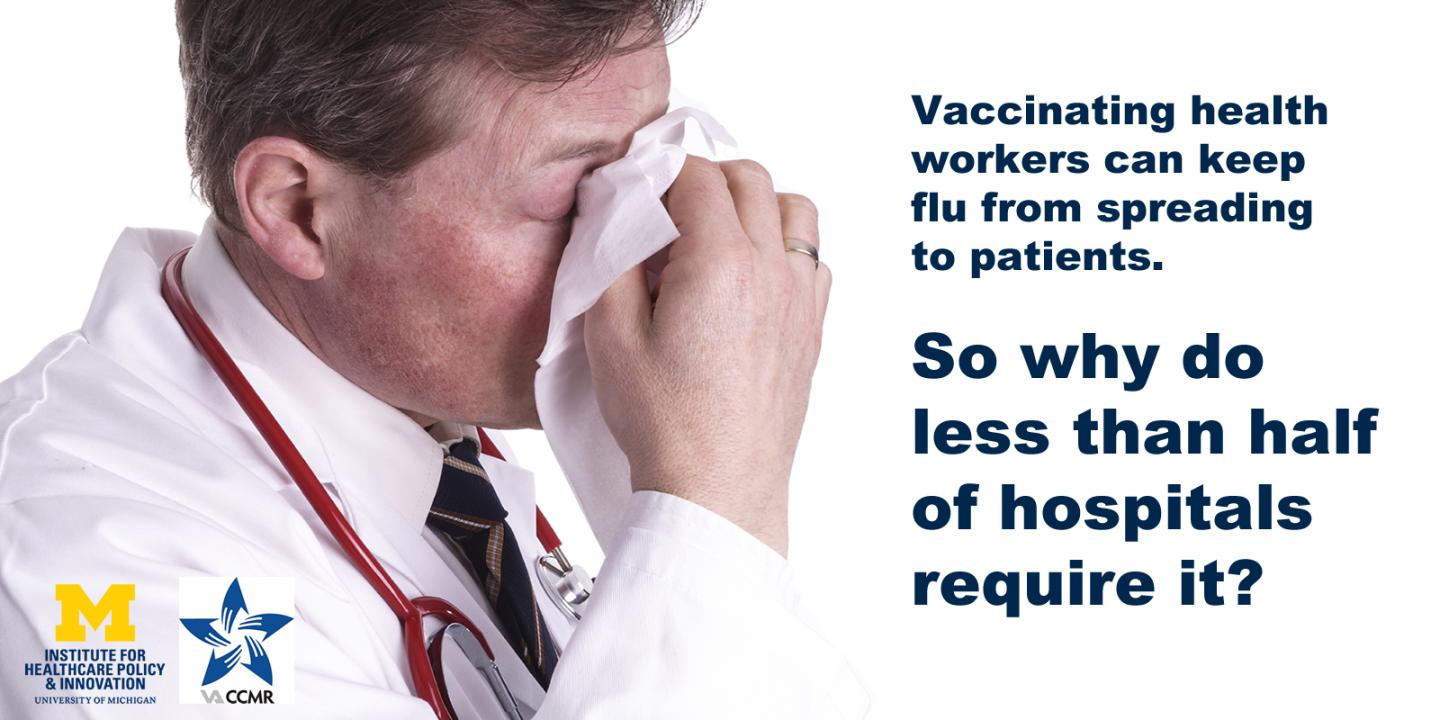 Multiple national recommendations urge all healthcare workers to get the influenza vaccination, to reduce the chances they will pass the virus on to their patients. But a new study finds that more than half of hospitals still don’t require their doctors, nurses and other healthcare providers to get vaccinated against the flu – despite the fact that they’re in contact with the people most vulnerable to flu every day.

In a paper published in Infection Control and Hospital Epidemiology, researchers from the University of Michigan Medical School and VA Ann Arbor Healthcare System report the results of a survey they did in 2013.

The rate at VA hospitals was very low: 1.3 percent. Since the time of the survey, the VA system has encouraged its hospitals to work toward near-universal vaccination by the year 2020. That’s in line with the recommendations set out for all healthcare workers by the U.S. Department of Health and Human Services.

“Vaccination of healthcare workers has been shown to significantly reduce patients’ risk of influenza and its complications, including pneumonia and death, compared with vaccination of patients alone,” says Sanjay Saint, M.D., MPH, senior author of the new study. “To put it bluntly, American hospitals have a lot of work to do.” Saint is the George Dock professor internal medicine at U-M and chief of medicine at the VA Ann Arbor.

“Mandated vaccinations are not a simple panacea and will continue to be met with challenges and opposition for numerous reasons,” says M. Todd Greene, Ph.D., MPH, lead author of the new study and a research investigator at U-M and the VA. “But our findings suggest that opportunities remain for many healthcare organizations to require vaccination of their staff to increase coverage rates.”

Another factor seems to be variation in the willingness of hospital administrators to implement a requirement. About 22 percent of those surveyed said simply that their hospital administration would not mandate the vaccine. Another 22 percent of the non-VA hospitals said their providers were “strongly encouraged” to get vaccinated against the flu. For more than half of the 77 VA hospitals that returned surveys, infection prevention staff said that they could not mandate the vaccine because they were part of a federal system.

Something short of a requirement appears to be in place at many hospitals, though the survey did not ask respondents to go into detail about the specifics of their policies. Just over 21 percent of those surveyed said that the vaccine wasn’t mandated at their hospitals, but that unvaccinated staff had to sign a form saying they had declined to get vaccinated, or wear a mask while seeing patients during flu season.

Saint notes that research shows that vaccine mandates for healthcare providers work. A survey conducted by the CDC in 2015 showed that healthcare settings with mandatory vaccination for healthcare personnel achieved 96 percent vaccination coverage of their workers, compared to only 44 percent coverage in settings that didn’t require or promote vaccination.

Because of this, the CDC recommends annual influenza vaccination for all healthcare personnel who provide direct patient care. Flu vaccine policies and programs aim to prevent possible transmission of the flu not only to patients, but to co-workers in order to ensure a healthy healthcare workforce that can take care of patients during the winter months when flu activity can increase demand for healthcare.

While the flu vaccine does not guarantee immunity from flu, it does reduce the severity of the disease for those who catch it.