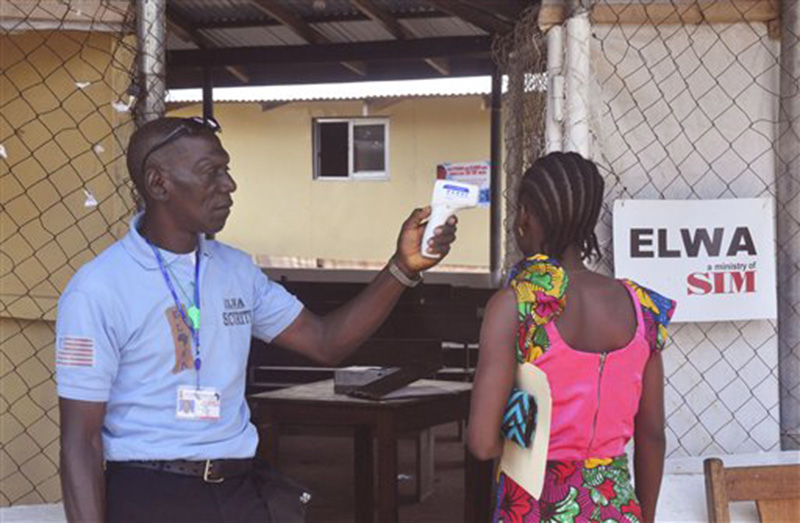 A unidentified family member, right, of a 10-year old boy that contracted Ebola, has her temperature measured by a health worker before entering the Ebola clinic were the child is being treated on the outskirts of Monrovia, Liberia, Friday, Nov. 20, 2015. (Courtesy of Associated Press)

Liberia has discharged its last two known Ebola patients from a treatment center, beginning its third countdown to become free from transmission of the deadly virus, health authorities said Friday.

Three cases were reported Nov. 20 in Liberia — one of the three West African countries hit hardest by the worst ever Ebola outbreak. One of them, a 15-year-old boy, died Nov. 23.

The boy, who lived in the eastern Paynesville district, was Liberia’s first Ebola patient since it was declared Ebola-free for a second time in September. The boy’s father and brother were released Thursday after recovering from Ebola and have reunited with their families, said Deputy Health Minister Tolbert Nyenswah.

“We don’t have any confirmed cases anywhere in the country that we know about,” said Nyenswah, who is also the head of Liberia’s Ebola Case Management System.

He said the 42-day countdown to become free from transmission of the deadly virus started Thursday. The World Health Organization declares that Ebola disease transmission has ended when the country goes through two incubation periods — 21 days each — without a new case emerging.

Local and international health authorities are using gene sequencing to investigate the source of the latest outbreak.

“What we know is that it is not a virus that is imported; it is a virus that has been in Liberia,” he said, though he warned: “Globally Ebola is not over yet.”

More than 11,300 people have died during the outbreak, which was first confirmed in March 2014 and has been concentrated in Liberia, Sierra Leone and Guinea, according to WHO. Liberia has recorded more than 4,800 deaths and more than 10,600 cases.

Liberia was first declared Ebola-free May 9, but new cases emerged in June resulting in two deaths. WHO declared the country Ebola-free again on Sept. 3.