A life-sized artificial human lung created at the Technion-Israel Institute of Technology is the first diagnostic tool for understanding in real time how tiny particles move and behave in the deepest part of the human lungs (alveolar tissue). The patented platform could provide a better understanding of the health risks associated with airborne pollution, and be used for the evaluation and design of drugs for the respiratory system. The results were published recently in Scientific Reports.

Inhaled particles (also known as aerosols) are tiny particles that can originate in nature, and from industrial and transportation sources, and which enter the lungs via inhalation. Although they are just a few microns in size, i.e. one hundredth of the size of a grain of sand – increased and prolonged exposure to these particles may interfere with the activity of the body’s organs (including neurons in the brain), and in some cases even lead to the onset of cancers (e.g. lungs). 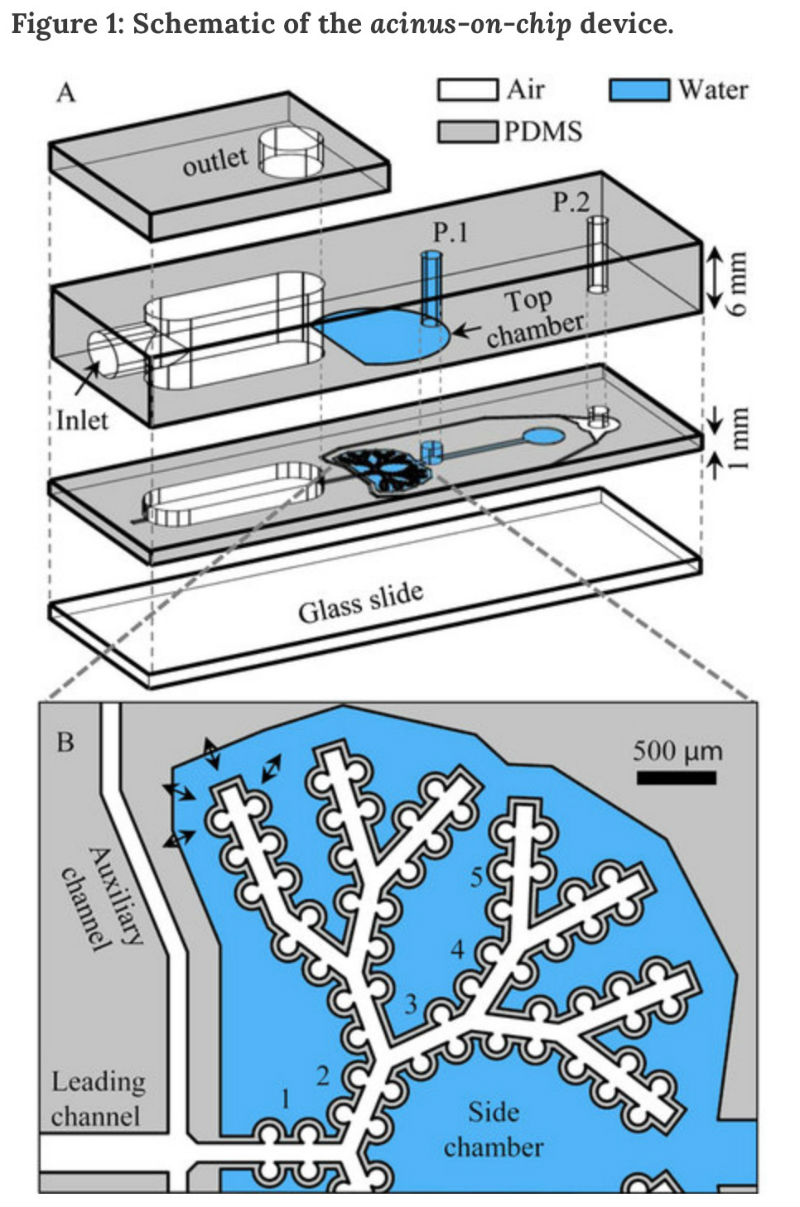 (A) Microfluidic acinar model consisting of three PDMS layers stacked on top of a PDMS-covered glass slide. (B) Magnified view of the acinar tree, featuring five alveolated airway generations (numbered 1 through 5). The thin airway walls, embossed in the bottom face of the bottom PDMS layer, are cyclically deformed by applying pressure to the surrounding top and side water chambers (colored in blue) via a syringe pump connected to port 1 (marked P.1). Particle tracking assays are conducted by injecting incense smoke through port 2. During deposition assays, an aerosol of polystyrene particles enters through the inlet and leaves mostly through an exhaust tube connected to the outlet. A syringe pump connected to port 2 (marked P.2) draws a slow stream of aerosols through the leading channel and auxiliary channels from which the aerosol is drawn into the alveolated airways as a result of the cyclic change of airway volume.

“This is the first diagnostic tool that enables quantitative monitoring of the dynamics of aerosols at such small scales,” said lead researcher Professor Josue Sznitman, of the Faculty of Biomedical Engineering. “It gives us the ability to directly observe airborne particle trajectories and their patterns of deposition in the alveoli in real time.”

Monitoring the movement of aerosols in the respiratory system, and especially how they are deposited in alveolar tissue, has long posed a challenge for researchers. This is due in part to their tiny size, and because their movement is affected by airflow, gravity and other forces. Another factor that makes it hard to map the movement of aerosols is the complex structure of the alveolar tissue, which contains hundreds of millions of tiny air sacs interconnected by dense texture of narrow ducts. For this reason, it is impossible to study the movement of these particles in vivo, and researchers have had to rely on animal-models or computer simulations.

The walls of the artificial lung system provide a realistic simulation of a real human lung. They expand and contract, similar to the actual respiratory system, making it possible to understand the behavior of both ‘bad’ inhaled particles (pollution) and ‘good’ particles that are administered as medication to the alveoli. The model could also reduce the need for animal testing in the study of the respiratory system.

According to its designer and builder Dr. Rami Fishler, also of the Technion Faculty of Biomedical Engineering, “the model consists of technologies similar to those used to manufacture computer chips, and comprises a branched network of minute air ducts approximately one-tenth of a millimeter wide, with craters simulating the alveoli.”