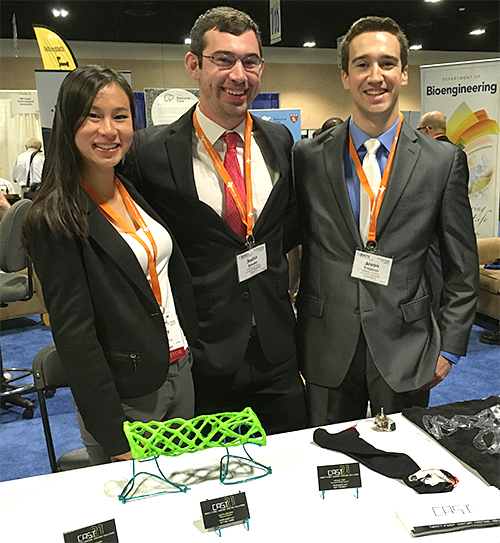 Everyone has either broken a bone or likely knows someone else who suffered a fracture. In the United States alone, an average of 6 million people seek medical assistance for a broken bone each year, according to the American Academy of Orthopedic Surgeons.

Traditional treatment often calls for a cast that stabilizes the area of the break so it can heal properly. These casts are made of plaster or fiberglass, both of which can be heavy and cumbersome, keep air away from the skin, and sometimes cause odors, itching, stiffness, swelling and pain.

An interdisciplinary team of students at the University of Illinois at Urbana-Champaign is challenging the idea of the traditional cast with a system that uses a lighter, open lattice-work version of a cast that is created with an extrusion-like process, allowing for a custom fit that covers less skin. The new cast still immobilizes the area of the break but with fewer drawbacks. And, as the openwork design allows the students access to more skin surface area, they are pairing the cast with electrical stimulation (very low-voltage vibrational therapy) to help breaks heal faster and electrical muscle stimulation to retain muscle volume.

All three team members are College of Engineering seniors at Illinois: Ashley S. Moy in Bioengineering, Justin Brooks in Electrical and Computer Engineering, and Jason Troutner in Mechanical Science and Engineering.

In early December 2015, the team won the Saint Louis University “Real” Elevator Pitch competition in the for-profit category. The contest connects students from U.S. colleges and universities with potential investors. Teams submitted 30-second YouTube video proposals, and those who were selected to move on each chose one team member to “pitch” the group’s idea.

One by one, each student — in this case, Moy — quickly described his or her team’s project to a small group of investors, who judged the idea as they all rode a 40-story elevator in the One Metropolitan Square building in St. Louis. If a judge was interested, the student collected that person’s business card, and the Top 3 finalists were determined by the students with the most cards. Those finalists pitched their ideas to celebrity judges while briefly being ferried around the city in a Tesla Model S. The winning teams (one each in “for-profit” and “social impact” categories) earned cash and an expenses-paid trip to South by Southwest (SXSW) in Austin, Tex., in March 2016.

The Illinois team first displayed their prototype and their new company, Cast21, at the Biomedical Engineering Society (BMES) annual meeting, October 8-10, 2015, in Tampa, Fla. For two and a half days, as part of the exhibit booth of the UI Department of Bioengineering, the students described and showed their design to other bioengineering students, faculty, researchers and industry representatives. The reaction was entirely positive, and the students said they were grateful for the concentrated feedback they received from BMES attendees. Numerous researchers and faculty made suggestions for perfecting the design and process, several people offered business and funding advice, and more than one visitor was excited enough about the idea to ask if Cast21 was hiring.

The three students have come a long way for a team that admits to first pondering, “What are all the problems in the world?” as they considered what issue to tackle for their senior design project. Narrowing their thinking to the fact that so many people experience broken bones, the team eventually focused on developing the new cast when they realized that the typical treatment had gone mostly unchanged for the past 40 to 50 years.

The team started with Moy, who was working on an idea for her senior design project with Jenny Amos, advisor and associate teaching faculty in Bioengineering. Then Moy met Troutner — who participates in club gymnastics — at a campus meet. Brooks joined the team a little later, after completing an off-campus summer internship and then responding to Moy’s Facebook post asking for an electrical engineering student to contribute his or her experience with small electronics. Brooks said he “had a vague idea” the team was onto something exciting fairly early in their discussions, especially when, after explaining the project to several advisors, “no one shot it down.”

The students said they began thinking about the Chinese fingertrap, a woven cylinder usually made of bamboo that is used as a “game.” Players are asked to put their fingers into each end and then try to remove them. The tendency is to pull in both directions to get out of the game, but that results in a tighter fit, effectively “trapping” the fingers. The Illinois students started looking into whether they could use the engineering principles of the fingertrap weave to produce an improved version of the traditional cast. Eventually their brainstorming and discussions led to the open lattice structure.

The students said they realize that other researchers have used 3D printing to create recent cast alternatives similar to their design, but those versions can be expensive and slow to produce. And the Illinois team believes their production method works better than 3D printing. They have developed a tubelike structure into which a liquid is injected that turns into a solid that forms the cast. When the structure is “set,” the plastic tube is cut away.

Troutner says the team is “still testing different materials to find good quality materials that fit the design and can compete with the ‘modern cast.’” In fact, they named their company “Cast21” as a nod to the idea of moving the casting structure and process into the 21st century.

Currently they are looking at different inflow materials, Moy says, to find just the right composite material that will be “cost-effective and retain tensile strength and rigidity.”

Moy says the team is also researching various funding options, especially grants that would allow unrestricted use of the funds for the development of their product.

Each team member brings their unique experiences, education and expertise to the project. Troutner says the new cast is “structurally sound, lightweight, and hygienic,” and that this is partly the result of “a little of my mechanical engineering bias — focusing on the structure.”

When Brooks initially joined the team, Moy and Troutner had already decided to create an openwork cast married with a muscle/bone stimulator. “It had just come down to the ‘how,’” Brooks said, and he quickly showed that he could contribute expertise to developing a custom-tailored integration of electrical stimulation of muscles and bone.

And Moy provides the bioengineering portion — the integration of biology and engineering, as well as the ability to make a solid, persuasive presentation, a quality that Troutner and Brooks both recognized in her when they first got together and again when they started talking to bioengineers at BMES.

All three said their experience at BMES helped determine the future of their idea. Debuting the idea at BMES was an opportunity to talk with “people who knew much more than we did,” said Troutner.

“I was excited about it as an engineering accomplishment,” Brooks said, and BMES “was a fantastic opportunity to meet a lot of people.”

Among the UI faculty and staff the team credits with helping further the development and viability of their idea are Amos; Scott Carney, professor in Electrical and Computer Engineering; and Stephanie Larson, assistant director of student programs and marketing in the Technology Entrepreneur Center.

“Winning SLU’s Real Elevator Pitch competition is a great way for additional regional exposure for this team,” Larson recently said. “This team is so passionate, and I just love their energy and enthusiasm. The team really works well together to support each other, and that really was displayed at SLU’s elevator pitch competition.”

Carney said he “was impressed with their clear vision of the problem with current casts and (the team’s) solutions.”

Amos, who will help the team further refine their idea and test it in the pre-clinical phase, said she sees Cast21’s elevator pitch win as a “great validation that a simple, elegant solution to an everyday problem is needed in this world, and that students can create designs that garner national attention.”

Even though their prototype currently addresses broken arms and wrists, the team plans to expand their company’s scope in the future to target all common bone fractures. The students say they are committed to seeing how far their idea for Cast21 will go.

Carney said that the team’s elevator pitch win shows that “A clear, concise problem statement is crucial to bringing in others to support the effort, but beyond that, it helps to frame the problem for the team, too.”

As the team members continue to focus on perfecting their idea beyond the classroom, they believe they are onto something that could revolutionize the industry, so it is no surprise that the Cast21 product has become a part of all of their future plans.

Troutner says his post-graduation plans include earning a master’s degree in biomechanics and robotics and continuing to work with the company. Moy says she also wants to continue with Cast21 after graduation and see the new cast grow into a commercial product that could be licensed. Eventually she wants to be part of the venture capital and startup culture. Brooks plans to consider working in industry after graduation, and he says he’s interested in a number of companies, including UTC Aerospace — where he interned last summer — and, of course, Cast21.

This article originally appeared on the University of Illinois at Urbana-Champaign Department of Bioengineering’s website.