Researchers from MIT and Brigham and Women’s Hospital have designed a new type of pill that, once swallowed, can attach to the lining of the gastrointestinal tract and slowly release its contents. The tablet is engineered so that one side adheres to tissue, while the other repels food and liquids that would otherwise pull it away from the attachment site.

Such extended-release pills could be used to reduce the dosage frequency of some drugs, the researchers say. For example, antibiotics that normally have to be taken two or three times a day could be given just once, making it easier for patients to stick to their dosing schedule.

“This could be adapted to many drugs. Any drug that is dosed frequently could be amenable to this kind of system,” says Giovanni Traverso, a research affiliate at MIT’s Koch Institute for Integrative Cancer Research, a gastroenterologist at Brigham and Women’s Hospital, and one of the senior authors of a paper describing the device in the April 6 issue of the journalAdvanced Healthcare Materials. 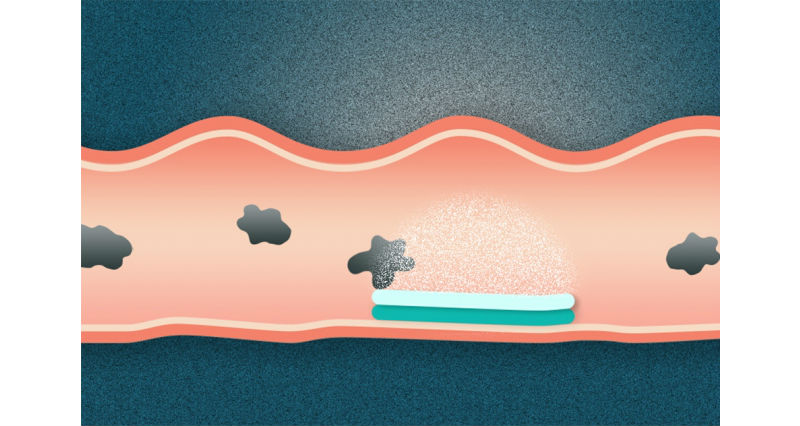 Researchers have created a new type of dual-sided pill that attaches to the gastrointestinal tract. One side of the pill sticks to mucosal surfaces, while the other is omniphobic, meaning that it repels everything it encounters. (Credit: Christine Daniloff/MIT)

Two Faces
Over the past several decades, Langer’s lab has developed many types of materials that can be implanted in the body or attached to the skin for long-term drug release. To achieve similar, long-term drug release in the gastrointestinal tract, the researchers focused on a type of material known as mucoadhesives, which can stick to the mucosal linings of organs such as the stomach.

Scientists have previously explored using this kind of material for drug delivery to the GI tract, but it has proven difficult because food and liquid in the stomach become stuck to the tablet, pulling it away from the tissue before it can deliver its entire drug payload.

“The challenge with mucoadhesives is that the GI tract is a very rough and abrasive environment,” says Lee, a 2014 Wellesley College graduate who began this project as her senior thesis.

To overcome this challenge, the researchers decided to create a dual-sided device, also called a Janus device after the two-faced Roman god. One side sticks to mucosal surfaces, while the other is omniphobic, meaning that it repels everything it encounters.

For the mucoadhesive side, the researchers used a commercially available polymer known as Carbopol, which is often used industrially as a stabilizing or thickening agent. The omniphobic side consists of cellulose acetate that the researchers textured so that its surface would mimic that of a lotus leaf, which has micro and nanoscale protrusions that make it extremely hydrophobic. They then fluorinated and lubricated the surface, making it repel nearly any material.

The researchers used a pill presser to combine the polymers into two-sided tablets, which can be formed in many shape and sizes. Drugs can be either embedded within the cellulose acetate layer or placed between the two layers.

To simulate the tumultuous environment of the GI tract, the researchers flowed a mix of food including liquids and small pieces of bread and rice along the tissue and then added the tablets. The dual-sided omniphobic tablet took less than 1 second to travel along the tissue, and the dual-sided mucoadhesive stuck to the tissue for only 7 seconds before being pulled off. The Janus version stayed attached for the length of the experiment, about 10 minutes.

Tejal Desai, a professor of bioengineering and therapeutic sciences at the University of California at San Francisco, says this approach could make it possible to deliver larger quantities of drugs through the GI tract.

“The ability to precisely engineer the adhesiveness of a particle opens up possibilities of designing particles to selectively adhere to specific regions of the GI tract, which in turn can increase the local or systemic concentrations of a particular drug,” says Desai, who was not involved in the work.

The researchers now plan to do further tests in animals to help them tune how long the tablets can stay attached, the rate at which drugs are released from the material, and the ability to target the material to specific sections of the GI tract.

In addition to delivering antibiotics, the two-sided material may help to simplify drug regimens for malaria or tuberculosis, among other diseases, Traverso says. The researchers may also further pursue the development of tablets with omniphobic coatings on both sides, which they believe could help patients who have trouble swallowing pills.

“There are certain medications that are known to get stuck, particularly in the esophagus. It causes this massive amount of inflammation because it gets stuck and it causes irritation,” Traverso says. “Texturing the surfaces really opens up a new way of thinking about controlling and tuning how these drug formulations travel.”

The research was funded by the Bill and Melinda Gates Foundation, the National Institutes of Health, and the Alexander von Humboldt Foundation.