In the past few years, drug after drug designed to slow or stop the progression of Alzheimer’s disease has failed in clinical trials. Some had no effect on the progression of the disease, others made patients’ symptoms worse and yet others produced results so equivocal it was difficult to interpret them.

The bottom line is that no new drug has been approved for the treatment of Alzheimer’s for 10 years and none of the drugs in use prevent the progression of the disease.

Given this disappointing record, some scientists have begun to question the model of the disease many of the drugs assume. Known as the amyloid cascade hypothesis, it posits that the cognitive decline in Alzheimer’s is caused by the accumulation in the brain of plaques, or aggregates, of thousands of copies of a peptide called amyloid beta.

Instead of being neurotoxic, the plaques may actually be protective, said Liviu Mirica, associate professor of chemistry in Arts & Sciences at Washington University in St. Louis. 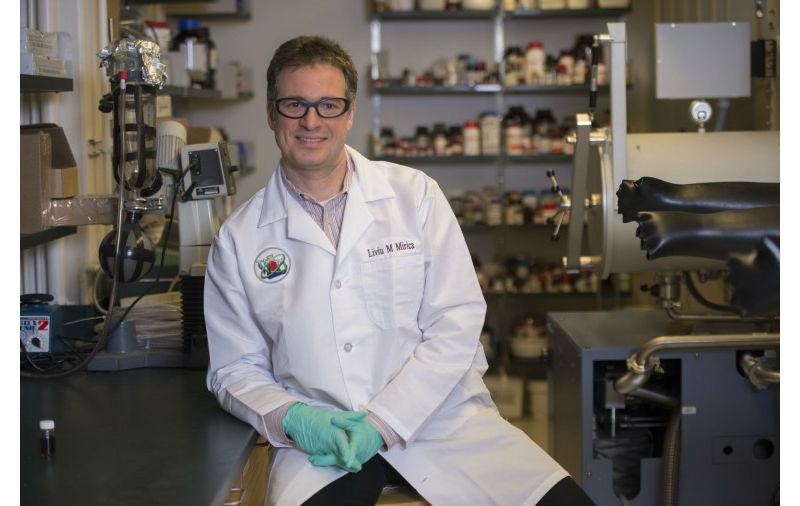 Recent work suggests small aggregates of amyloid-beta peptide, called soluble oligomers, rather than the insoluble plaques may be the neurotoxic form of amyloid beta. This might explain why the disease process seems to start 10-15 years before the plaques become prominent in the brain, he said.

Mirica, who specializes in the design of chemical agents that contain metal ions, called metal complexes, has a clever idea he hopes might help the scores of scientists and research physicians who are struggling to unravel the mechanism of this disease.

He wants to design bifunctional chemical agents that bind specifically to the suspicious oligomers and to metal ions naturally present in the brain, which he suspects increase the toxicity of amyloid beta by stabilizing the fragile oligomers. These molecules might serve as the basis for therapeutic agents for Alzheimer’s disease.

He also wants to design bifunctional chemical agents that are loaded with a long-lived metal radioisotope and have an affinity for amyloid aggregates (not necessarily the oligomers). These molecules, which would be easier to make than therapeutic molecules, would be used as imaging agents in PET (positron emission tomography) scans used for the diagnosis of Alzheimer’s.

The National Institutes of Health recently awarded Mirica $1.5 million to pursue this project.

A Sticky Problem
Amyloid beta peptides are actually small pieces of a longer protein called the amyloid precursor protein (APP) that threads through cell membranes in many tissues, but is particularly concentrated at synapses (or junction points) of neurons.

This ancient and highly conserved protein is thought to be involved in synaptic formation and repair, and it may also act as a metal ion transporter.

APP is metabolized by two distinct and mutually exclusive pathways that cleave the longer protein at different sites, producing different fragments. According to the amyloid hypothesis, Alzheimer’s disease is caused by a metabolic shift (triggered by genes, the environment or aging) that favors the second pathway.

Scientists are beginning to suspect the oligomers, which are held together only by weak interactions and are soluble in the extracellular environment, may actually be more neurotoxic than the insoluble plaques.

A representative bifunctional compound has sites (the left and right arms) that interact with the amyloid beta peptide and another site that binds metal ions such as Cu2+ (shown in the center as an orange sphere). (Credit: Liviu Mirica)

They are also beginning to think the 42-amino-acid peptide is the one most prone to form soluble oligomers. (Amyloid beta peptides can be of various length.)

Ultimately, Mirica would like to design a molecule that selectively recognizes and binds this peptide.

But cell cultures showed that breaking down the fibrils was neurotoxic, not protective, as he had expected, apparently because the fibrils reverted to soluble oligomers. “So we learned something very important from that study,” he said.

“An obvious goal would be to design a molecule that selectively latches onto the soluble oligomers. But the oligomers are very heterogenous,” Mirica said, “and so weakly interacting that chemical manipulations intended to characterize them would tend to alter them.”

To better probe the interactions between novel compounds and soluble oligomers, Mirica and his collaborator Michael Gross, professor of chemistry in Arts & Sciences, have developed a novel mass spectrometry technology that will allow them to screen more rapidly for compounds that destabilize the oligomers.

Seeing Through the Fog
In the meantime, however, Mirica is working toward another, more easily achievable goal: a molecular structure that will bind to amyloid beta species and to a radioactive metal for use as a PET imaging agent. PET scanners, which made it possible for the first time to detect the accumulation of amyloid in the brains of living patients, detect radiation emitted by a radioactive isotope incorporated in a biologically active molecule.

Until recently, PET scans were mostly been used in research to determine which patients would be part of clinical trials and whether or not treatments had lessened the brain’s amyloid load. In 2013, however, the Society of Nuclear Medicine and Molecular Imaging and the Alzheimer’s Association issued guidelines for their use in clinical medicine.

The two radioactive isotopes most commonly used for amyloid imaging are carbon-11 and fluorine-18. The disadvantage of both radioisotopes, Mirica said, is their short half-life. The half-life of C-11 is 20 minutes and the half-life of F-18 is 110 minutes.

So once the radioisotopes are made in a medical cyclotron, the clock is ticking as they’re incorporated in molecular structures, injected into a patient, travel to their targets, and show up on the scanner’s detectors.

Mirica hopes to develop bifunctional compounds that can be both therapeutic and diagnostic agents. In the first role, they would block the metal-mediated formation of amyloid beta oligomers, and in the second, they would be loaded with a radioistope (Cu-64) and employed as PET imaging agents). (Credit: Livia Mirica)

But Washington University School of Medicine in St. Louis has expertise in the use of a much longer lived radioisotope. The department of radiology is a leader in the use of copper-64 for the diagnosis and treatment of cancer, Mirica said.

“So we’ve teamed up with them to develop a Cu-64 imaging agent for amyloid beta PET imaging,” he said. Mirica’s collaborators include Buck E. Rogers and his research group in the departments of radiation oncology and radiology.

Cu-64 has a half-life of 13 hours and Mirica plans to save even more time by pre-synthesizing molecules that will bind the copper very quickly, incorporating it within their structure in “five minutes tops.”

With a Cu-64 imaging agent it might be possible to image the brain for up to two days, long enough to see the effect of a candidate agent on amyloid aggregates. This proxy endpoint, or way of judging the efficacy of a therapy, could never totally replace the primary endpoint, which is a slowing or halting of cognitive decline, he said, but it might help to prune the search and avoid gut-wrenching headlines about late-stage drug failures.

Eventually, however, Mirica would like to return to his hypothesis that metal ions increase the toxicity of amyloid by stabilizing the soluble oligomers. If he could design a molecule that binds specifically to the oligomers and also to metal ions in the brain, he would be able to test this hypothesis and also, perhaps, kickstart the development of a new Alzheimer’s drug.

Recently developed compounds are able to reduce the neurotoxicity of soluble oligomers in vitro and Mirica is establishing collaborations with researchers in the School of Medicine’s department of neurology to evaluate these molecules in vivo.

He realizes that attacking a complex and dark disease by designing new molecules is a bit like using a toothpick to lever up a boulder, but he also says that given the redoubtable complexity of this disease and its disturbing societal consequences, it is important that we attack it from many different angles.

Even small advances would be worth the effort, he said.

According to the Alzheimer’s Association, in 2015 the direct costs to American society of caring for those with Alzheimer’s totaled an estimated $226 billion. Thus, even a one-month delay in admitting Alzheimer’s patients to nursing homes would save the nation almost $20 billion a year, so heavy has the burden of this disease become.