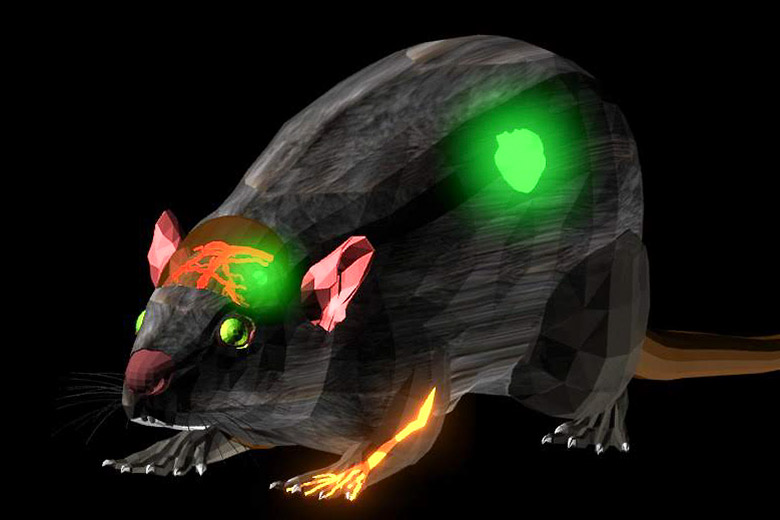 The NIR-II dye can resolve blood vessels in the forelimb as well as the brain with unprecedented clarity. The dye also allows clear resolution of tumors in the center of the mouse’s brain. (Credit: Alexander Antaris)

In recent years, physicians and researchers have increasingly turned to glowing dyes to look beneath the skin. An eye doctor, for example, might inject a dye into a patient’s blood before shining a bright light in her eye. The dye causes the blood vessels to glow, providing a roadmap of the patient’s retina on a computer screen.

At Stanford and elsewhere, researchers have worked to create dyes that, when stimulated, emit light of long wavelengths close to infrared light. Such a light, which is not visible to the human eye, could then be viewed by a special camera and be projected to a monitor to produce deeper, sharper images from inside the body.

This fluorescent imaging can help to pinpoint tumor locations near the skin’s surface in a variety of cancers, such as head and neck, melanoma and breast cancer.

Most of these dyes have safety concerns: Some made from carbon nanotubes or quantum dots can linger in the body for days and months, caught in the liver and spleen, before being excreted slowly. This drawback thus far has prevented their use in humans.

Now, researchers at Stanford say they have solved that problem. They have created molecular fluorescent dyes that produce light in a portion of the near infrared range known as the second near-infrared window, or NIR-II. Dyes emitting light in that range have long wavelengths that can escape from tissues with little scattering, thus producing better images.

Led by chemistry Professor Hongjie Dai, the team has created a dye that can be excreted through urine within 24 hours, a development that may at some point make this valuable imaging procedure available for human health care.

“The difficulty is how to make a dye that is both fluorescent in the infrared and water soluble,” said Alex Antaris, a graduate student in Dai’s lab and the first author on a recent paper in the journal Nature Materials. “A lot of dyes can glow but are not dissolvable in water, so we can’t have them flowing in human blood. Making a dye that is both is really the difficulty. We struggled for about three years or so and finally we succeeded.”

What’s more, the new dye produces images that are sharper and more detailed than before, increasing their potential value to medicine and surgery, Antaris said.

The paper details how NIR-II fluorescence imaging has potential as a surgical guide because it can capture video in real time, a striking contrast to tomographic imaging techniques, which can take minutes to hours to complete one scan.

“This could enable clinical use of fluorescence imaging to reach unprecedented depth for diagnostics or imaging guided surgery,” Dai said.