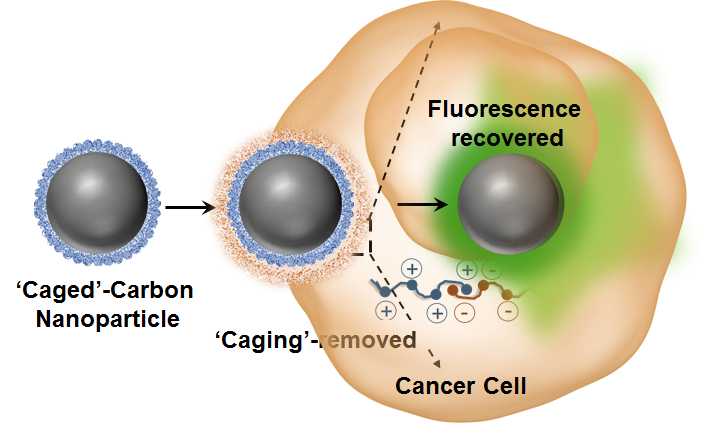 Tiny carbon dots have, for the first time, been applied to intracellular imaging and tracking of drug delivery involving various optical and vibrational spectroscopic-based techniques such as fluorescence, Raman, and hyperspectral imaging. Researchers from the University of Illinois at Urbana-Champaign have demonstrated, for the first time, that photo luminescent carbon nanoparticles can exhibit reversible switching of their optical properties in cancer cells.

“One of the major advantages of these agents are their strong intrinsic optical sensitivity without the need for any additional dye/fluorophore and with no photo-bleaching issues associated with it,” explained Dipanjan Pan, an assistant professor of bioengineering and the leader of the study. “Using some elegant nanoscale surface chemistry, we created a molecular ‘masking’ pathway to turn off the fluorescence and then selectively remove the mask leading to regaining the brightness.

“Using carbon dots for illuminating human cells is not new. In fact, my laboratories, and several other groups around world, have shown that these tiny dots represent a unique class of luminescent materials with excellent biocompatibility, degradability, and relatively facile access to large-scale synthesis in comparison to other popular luminescent materials such as quantum dots,” added Pan, who also directs the Professional Masters in Engineering Program in Bioengineering at Illinois.

And, the entire process of is highly controlled and can be observed in living cells as they reported in the group’s study, “Macromolecularly ‘Caged’ Carbon Nanoparticles for Intracellular Trafficking via Switchable Photoluminescence,” appearing in the Journal of the American Chemical Society.

“We can apply this technique for intracellular trafficking by means of switchable photo-luminescence in mammalian cells in vitro, wherein the endocytic membrane-abundant anionic amphiphilic molecules participates in the ‘de-caging’ process,” stated Pan. “The carbon dots, each measuring less than 50 nanometers in diameter, are derived from agave nectar and are highly luminescent. The in situ nanoscale chemical exchange further probed into the mechanistic understanding of the origin of carbon luminescence and indicated that it is primarily a surface phenomenon.

“This can be reversibly turned on and off by a simple counter-ionic nanoscale chemistry,” Pan said. “These results can become the basis for new and interesting designs for carbon-based materials for intracellular imaging probing cellular function and to study other biological processes.”