A team of MIT and Harvard University students who invented a smartphone-connected sensor that detects lung cancer from a single breath took home the grand prize from Wednesday night’s $100K Entrepreneurship Competition.

Astraeus has developed a postage-stamp-sized device, called the L CARD, that detects certain gases indicative of lung cancer. When someone blows onto the device, a connected mobile app turns a smartphone screen red if those gases are present and green if they aren’t.

Inventor Joseph Azzarelli, an MIT PhD student in chemistry, demonstrated the device on stage by spraying a syringe filled with the lung-cancer-signaling gases onto the device, causing the smartphone screen to flash red. “The L CARD reacts and sends instantaneous information to the physician that further attention is required,” Azzarelli said while a ripple of excitement spread through the crowd.

“We love that demo as much as you guys do,” added team member Jay Kumar, a student at Harvard Medical School.

After the competition, Azzarelli told MIT News the prize money will go toward product development and first-round clinical trials in research hospitals in the area. 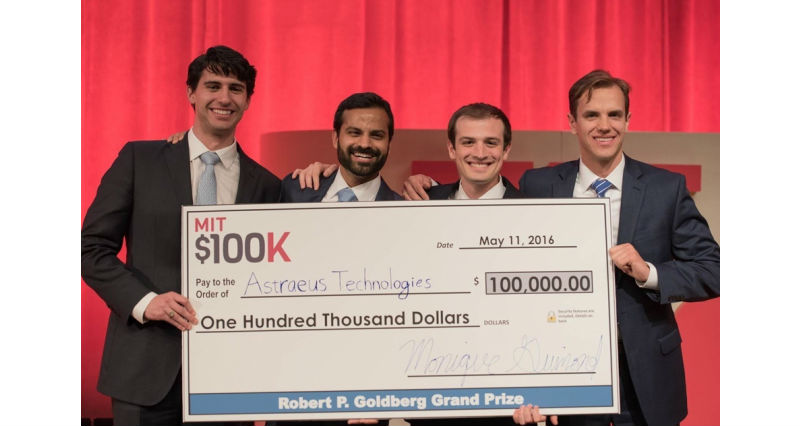 Cheaper, Safer Screening
Lung cancer is the deadliest type of cancer in the United States, causing more deaths than breast, colon, and prostate cancers combined, according to the World Health Organization. “Part of the reason lung cancer is so deadly is that the current gold standard screening test — the low-dose CT scan — is wholly inadequate in a variety of ways,” said team member Graham Lieberman, an MBA student at the Harvard Business School.

Kumar delved into more detail, explaining that CT scans cost about $800 for each scan, have a high false-positive rate, and expose patients to radiation that can increase their cancer risk.

Due to the risks and costs of CT scans, Lieberman added, only about 1.6 million of the 94 million Americans at risk for lung cancer — as estimated by the Centers for Disease Control and Prevention — are scanned each year. “A cheaper, safer screening device can be applied to a much larger percentage of that population,” he said.

The L CARD (which stands for Chemically Actuated Resonate Device) is essentially a modified near-field communication tag. Certain volatile organic compounds unique to the breath of lung cancer patients modify the tag’s radio frequency identification signal. A smartphone then pings the device and determines, from the modified signal, if those volatile compounds are present.

Kumar said the devices are an order of magnitude (about 10 times) more accurate than CT scans and can be made for less than $1. Astraeus will sell L CARDS directly to hospitals and clinics for use during routine annual checkups, he said. “We’re going after lung cancer,” Kumar said. “The root cause is bad screening: We’ve developed a better screening test, and it’s cost effective.”

Last night’s win was the second for Astraeus in the $100K Entrepreneurship Competition, which consists of three independent contests: Pitch, Accelerate, and the Launch grand finale. Astraeus, which formed last November, also won the $10,000 Danny Lewin Grand Prize and the $3,000 Founders.org Audience Choice Prize at the Accelerate competition on Feb. 10.

Going through the competition helped the team focus on all the steps it takes to establish and expand a business, Azzarelli told MIT News. “Going into the $100K — the Launch competition in particular, which is taken so seriously by so many — really forces you to think, ‘If we’re really going to do this, at the level we really want to do it at, how are we going to move forward,’” Azzarelli said.

A $10,000 data prize from Booz Allen Hamilton went to semifinalist team ReviveMed, which developed a platform that can be used to repurpose safe but shelved drugs at pharmaceutical firms, for other uses. Two teams split a $10,000 Thomson Reuters Data Prize: finalist team Hive Maritime, which is developing analytics and optimization algorithms for shipping routes and vessel speeds, based on predicted queues at ports and canals; and semifinalist team Swift Calcs, which is creating a cloud-based computational platform for engineers to collaborate on calculations.

Taking home the $15,000 Creative Arts Prize was Tekuma, which developed a service that matches people who want to rent property with artists who create and curate art, and ships the art to the rented space.

Five other finalist teams pitched ideas: AquaFresco developed a water-recycling technology that lets people use one batch of soapy water to clean their laundry for several months; DoneGood is an app that lets people rate businesses based on practices such as being green, supporting diversity, buying locally, and adequately supporting workers, among other causes; Lux Labs created a nanoscale film that selectively filters light to reduce energy consumption on mobile devices and improve efficiency of solar cells; Solugen invented a green, safe, scalable process for producing hydrogen peroxide, which is used for things like semiconductor fabrication, plastic production, and water purification; and ABA Power is making aluminum-based batteries that have 30 times the energy density of traditional lithium batteries and are manufactured with zero emissions.

Since its debut in 1990, the MIT $100K Entrepreneurship Competition has helped launch 160 companies worldwide that have raised an additional $1.3 billion in funding, have a combined market value of $16 billion, and have employed more than 4,600 people.