Massachusetts General Hospital (MGH) researchers have developed what appears to be a significant improvement in the technology behind brain implants used to activate neural circuits responsible for vision, hearing or movement. The investigators, who are also affiliated with the Boston VA Healthcare System, describe their development of tiny magnetic coils capable of selectively activating target neurons in the Dec. 9 issue of Science Advances.

“Neural stimulation systems based on electrodes are currently being used to restore senses such as vision and hearing; to treat neurological disorders such as Parkinson’s disease, and for brain-computer interfaces that can give paralyzed patients the ability to communicate or move objects,” explains lead author Seung Woo Lee, PhD, of the MGH Department of Neurosurgery. “But electrode-based neural stimulation devices, especially those that target the cortex, have several significant limitations. The environment within the brain can erode a metal electrode over time, and the brain’s natural foreign-body response can lead to scarring, which can impede passage of electrical fields.” 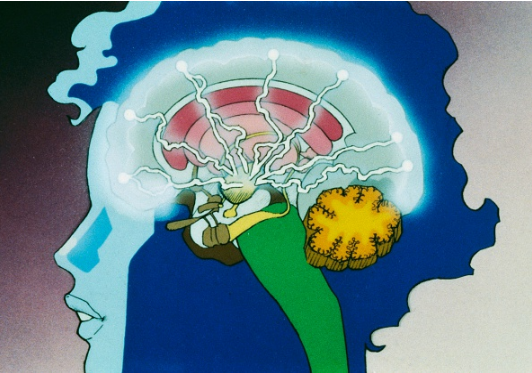 The use of magnetic rather than electrical fields to stimulate neurons presents several advantages, including the ability to penetrate scar tissue. Since the magnetic signal can pass through biocompatible insulating material, direct contact between neural tissue and the metal coil is eliminated, further reducing the potential for damage to the coil. But it had been believed that magnetic coils strong enough to activate neurons would be too large to be implanted within the brain’s cortex. The device developed by Lee and senior author Shelley Fried, PhD, of MGH Neurosurgery — in collaboration with scientists at the Palo Alto Research Center – takes advantage of the fact that the passage of electric current through a bent wire will induce a magnetic field. The novel coil they designed, while similar to the size of electrodes used for brain stimulation, was able to generate magnetic fields in excess of the thresholds required to activate neurons.

Testing these microcoils in brain tissue samples from mice revealed not only that they were capable of activating neurons but also that they did so more selectively than would be possible with metal electrodes. Electric fields most effectively activate neurons when they are oriented along the length of nerve cells, but most implantable electrodes generate fields that spread uniformly in all directions. In contrast, magnetic fields extend in specific directions, allowing selective targeting of neurons with the same orientation while simultaneously avoiding the activation of other neurons. The ability to avoid activation of passing nerve fibers prevents the spread of activation that typically occurs with electrodes, which can lead, for example, to the blurring of a visual image generated in response to stimulation of the visual cortex.

The MGH team proceeded to show that these microcoils could safely be implanted into the brains of anesthetized mice. Stimulation of coils inserted into the portion of the motor cortex that controls the animals’ whiskers resulted in whisker motion, with the direction depending on the frequency of the signal. Stimulating coils placed in the whisker sensory cortex caused whisker retraction. These experiments proved that implanted coils can be used to drive responses associated with the targeted neurons.

“Our next steps will be to continue improving coil design to reduce power and enhance selectivity, to confirm that the enhanced effectiveness of these coils will persist over time, and to determine whether stimulation of the visual cortex does elicit a visual signal,” says Fried, who is an associate professor of Neurosurgery at Harvard Medical School. “More stable long-term performance of these microcoils and the high-resolution signals produced by ever greater selectivity in neuron activation would significantly improve currently available neural prostheses and open up many new applications.”