The man who said he came to the aid of a visibly disoriented woman discharged from a Baltimore hospital wearing only a gown and socks on a frigid winter’s night said Friday that she’s been reunited with her family.

Imamu Baraka, a psychotherapist who has an office across the street from the University of Maryland Medical Center Midtown Campus, told The Associated Press he was so angry at the woman’s treatment that he decided to record Tuesday night’s events on cellphone video, fearing no one would believe him if he reported a patient being left at a bus stop like that on a cold January night.

“I knew that she was not supposed to be discharged from a hospital with no clothing on and no shoes,” he said during a Friday interview in his office.

Baraka’s cellphone video shows several guards strolling back to the hospital after escorting the patient out wearing only a hospital gown and socks. He described temperatures in the 30s and a cold wind blowing at the woman’s hospital gown, exposing her to the elements.

Her street clothes were stuffed in plastic bags and dropped at an open-air bus stop. She appeared disoriented and distressed as she stumbled along the sidewalk, making keening vocalizations but unable to formulate any words.

Baraka said he’s been in regular contact with the 22-year-old woman’s mother, who is grateful for his intervention, since his video went viral. The video alerted the woman to the whereabouts of her daughter, who had been missing for two weeks, he said.

“She’s doing a lot better. She’s getting the treatment that she needs. She’s in the company of family. This is a good thing now, because now she is getting things she could not get before because of this video,” he said.

The mother of the young woman has not immediately responded to AP requests seeking comment. 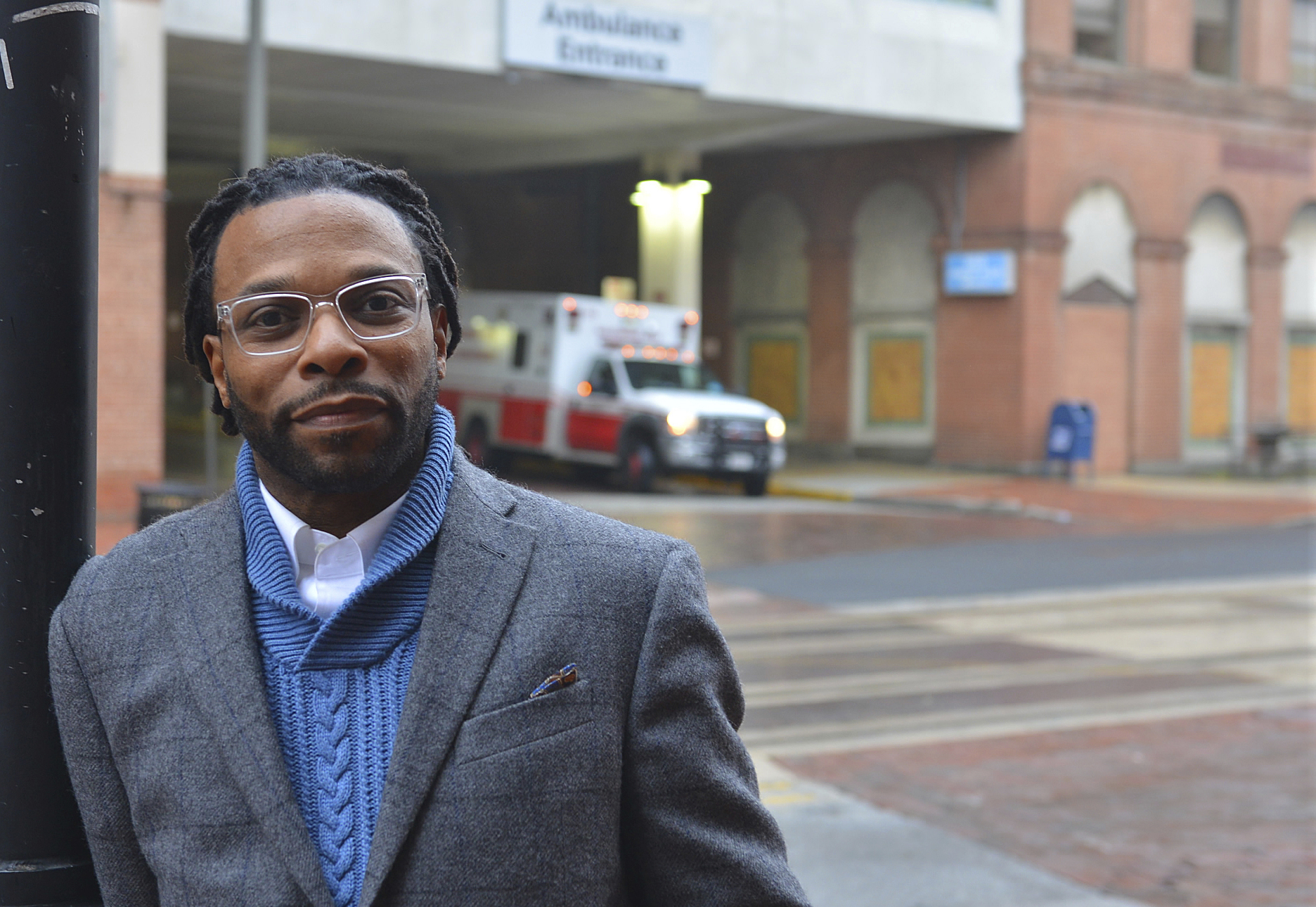 Imamu Baraka, the man who came to the aid of a woman discharged from a hospital wearing only a gown and socks on a cold winter’s night, stands outside the University of Maryland Medical Center Midtown Campus in Baltimore on Friday, Jan. 12, 2018. He was so upset that he recorded Tuesday night’s events on cellphone video, fearing no one would believe him if he reported a woman being left at a bus stop like that. (AP Photo/David McFadden)

Baraka said he was furious at the hospital security guards. Of those who brought her outdoors, he said: “I asked them three times, I asked them specifically, ‘Are you going to leave this lady out here like this?’ They kept walking.”

He then went and tried to help the woman shelter in the bus stop while calling 911 for an ambulance. He said he asked the arriving ambulance crew where they would take her, and they replied “back to the hospital.”

That’s exactly where she went. That same night, she was put in a taxi and sent to a homeless shelter, according to Baraka.

Baraka questioned the judgment of the medical professionals who authorized her release, asserting that they failed to avoid doing preventable harm.

“They failed that simple test. They put her in an environment where she could have literally ended up dead because it was cold that night,” he said.

Dr. Mohan Suntha, president and CEO of University of Maryland Medical Center, told a news conference Thursday afternoon that there were no excuses for what happened.

“We believe firmly that we provided appropriate medical care to a patient who came to us in need, but where we absolutely failed, and where we own that failure, is in the demonstration of basic humanity and compassion as a patient was being discharged from our organization after having received that care,” he said.

When asked for any updates to the hospital’s internal review, spokeswoman Lisa Clough said the administration is continuing its investigation and are “working to ensure that such a situation does not happen again.”

“This includes re-examining our policies and procedures to better understand where the breakdown occurred regarding this patient’s discharge,” Clough said in a Friday email.

The hospital is cooperating with regulatory agencies such as Maryland’s Office of Health Care Quality, according to Clough.

Baraka said he has spoken twice to Suntha, who has publicly thanked him for shooting the video.

“We are going to talk again, in person, after all the bigness of this sort of calms down. Oh, but he will be held accountable fully, one way or another,” Baraka said.