A man whose wife collapsed outside a locked hospital emergency room door and later died has received a face-to-face apology from the chief executive of the hospital’s parent company.

Patrick Wardell, CEO of Cambridge Health Alliance, told Peter DeMarco during a two-hour meeting at the headquarters of The Boston Globe on Tuesday that he was “very sorry” for what happened.

“I can understand the horrible pain that this has inflicted upon you,” Wardell said.

“It’s hard to continue saying we failed, but we did fail,” Sayah said at the meeting.

DeMarco’s heart-wrenching first-person account of the death of his wife, Laura Levis, appeared in The Boston Globe magazine. 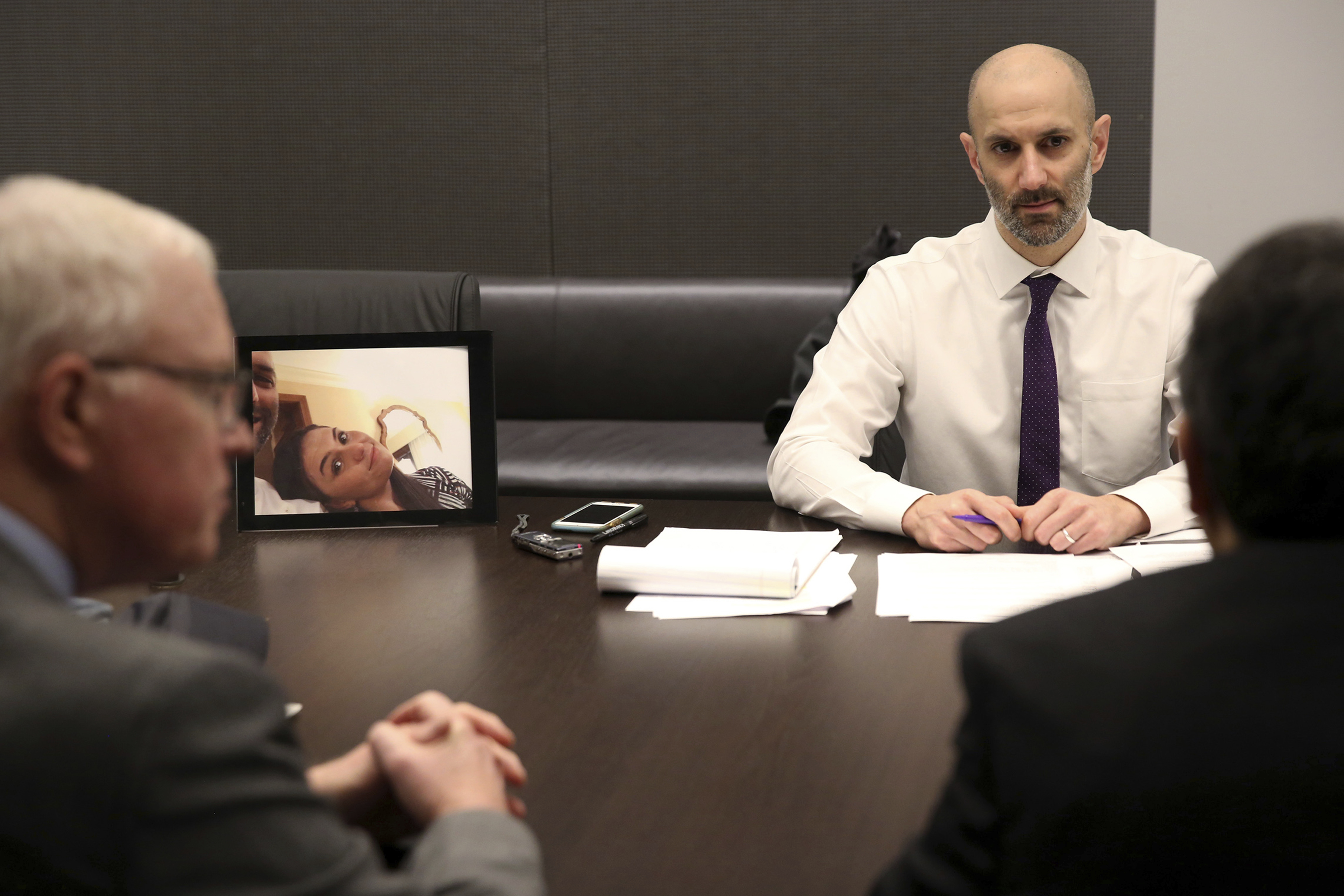 In this Nov. 13, 2018 photo, Patrick Wardell, CEO of Cambridge Health Alliance, left, pauses during a meeting in Boston with Peter DeMarco where he and other executives answered questions about the death of DeMarco’s wife, Laura Levis (in picture at left), in Somerville, Mass. Levis, 34, suffered a fatal asthma attack after encountering a locked emergency room door when she walked to CHA Somerville Hospital and called 911 for help in 2016. Patrick Wardell told Peter DeMarco during a two-hour meeting on Tuesday that he was “very sorry” for what happened. (Jessica Rinaldi/The Boston Globe via AP)

She found the door locked. There were instructions posted on that door to use another entrance instead. Perhaps because she was panicking, she did not see or could not understand those instructions, or she just didn’t make it in time. She sat down on a bench, called 911 and told the operator she was outside the hospital emergency room, couldn’t get in and was dying.

At one point, a nurse looked for her outside for 12 seconds but apparently didn’t see her in the predawn gloom.

She was eventually found unresponsive by a firefighter on the bench 29 feet from main entrance. She died at another hospital days later.

DeMarco said that although he accepted Wardell’s apology, he was not satisfied with all the hospital officials’ answers.

“The mistakes that led to Laura’s death were so unnecessary. For the hospital to own up to them couldn’t have been more necessary,” DeMarco said in an email to The Associated Press.

“I was certainly disappointed with some answers, and disappointed to learn that Somerville Hospital’s leaders have never spoken with the emergency room nurse who left Laura to die on a bench steps from the hospital’s doors,” he said.

DeMarco said he was also pleased with Wardell’s pledge to share the story of his wife’s death with other hospitals to help them learn from Somerville Hospital’s mistakes.

DeMarco has no plans to sue the hospital, which he said now keeps both emergency room doors unlocked.

Hospital officials learned from their investigation into Levis’ case and made several changes, including improving lighting, signage, video surveillance, and training for employees, Sayah said.