Most women with the most common form of early-stage breast cancer can safely skip chemotherapy without hurting their chances of beating the disease, doctors are reporting from a landmark study that used genetic testing to gauge each patient’s risk.

The study is the largest ever done of breast cancer treatment, and the results are expected to spare up to 70,000 patients a year in the United States and many more elsewhere the ordeal and expense of these drugs.

“The impact is tremendous,” said the study leader, Dr. Joseph Sparano of Montefiore Medical Center in New York. Most women in this situation don’t need treatment beyond surgery and hormone therapy, he said.

The study was funded by the National Cancer Institute, some foundations and proceeds from the U.S. breast cancer postage stamp. Results were discussed Sunday at an American Society of Clinical Oncology conference in Chicago and published by the New England Journal of Medicine. Some study leaders consult for breast cancer drugmakers or for the company that makes the gene test.

Cancer care has been evolving away from chemotherapy — older drugs with harsh side effects — in favor of gene-targeting therapies, hormone blockers and immune system treatments. When chemo is used now, it’s sometimes for shorter periods or lower doses than it once was.

For example, another study at the conference found that Merck’s immunotherapy drug Keytruda worked better than chemo as initial treatment for most people with the most common type of lung cancer, and with far fewer side effects.

The breast cancer study focused on cases where chemo’s value increasingly is in doubt: women with early-stage disease that has not spread to lymph nodes, is hormone-positive (meaning its growth is fueled by estrogen or progesterone) and is not the type that the drug Herceptin targets.

The usual treatment is surgery followed by years of a hormone-blocking drug. But many women also are urged to have chemo to help kill any stray cancer cells. Doctors know that most don’t need it, but evidence is thin on who can forgo it.

The study gave 10,273 patients a test called Oncotype DX, which uses a biopsy sample to measure the activity of genes involved in cell growth and response to hormone therapy, to estimate the risk that a cancer will recur. 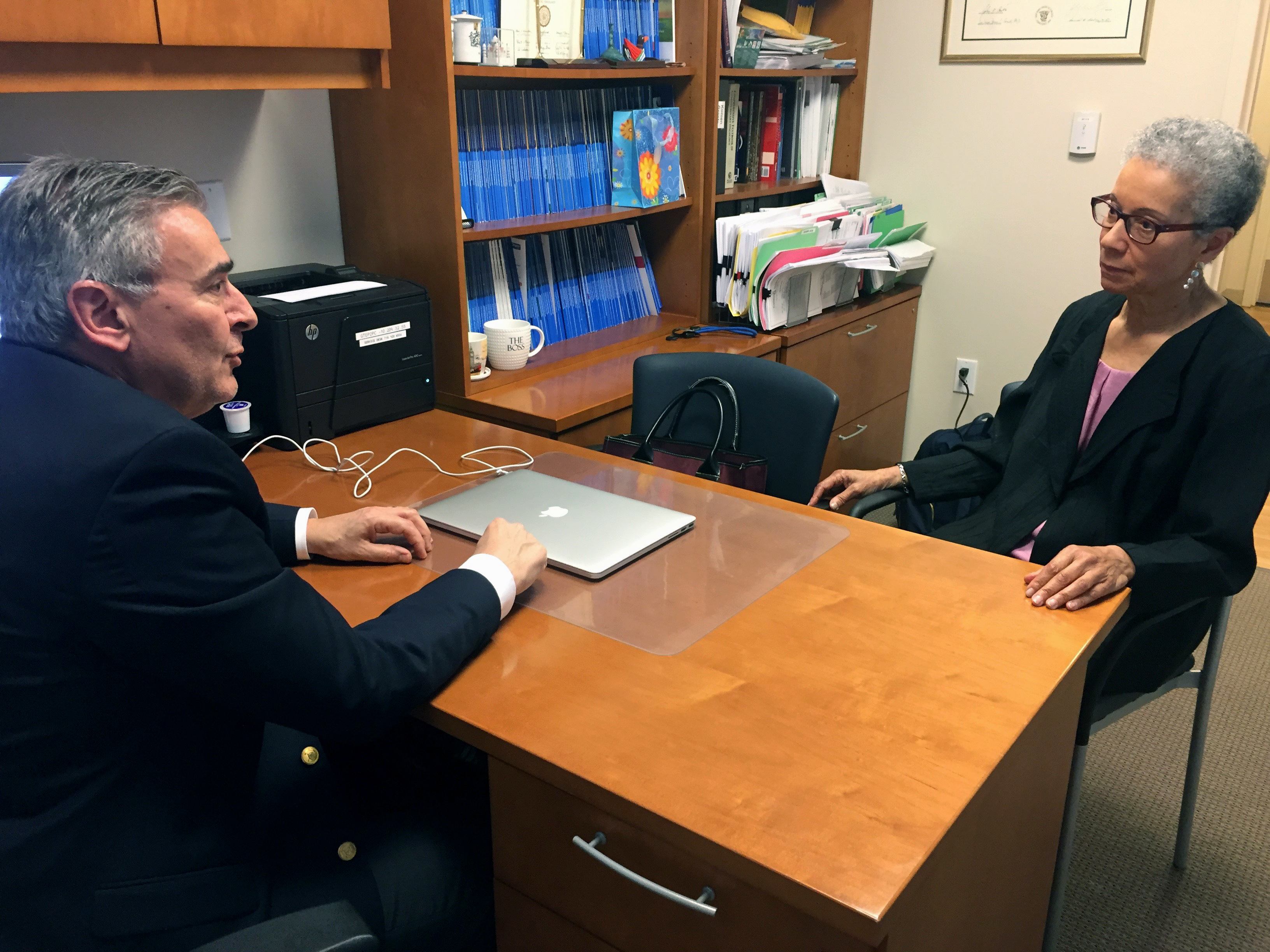 In this Thursday, May 24, 2018 photo, Adine Usher, 78, meets with breast cancer study leader Dr. Joseph Sparano at the Montefiore and Albert Einstein College of Medicine in the Bronx borough of New York. Usher was one of about 10,000 participants in the study which shows women at low or intermediate risk for breast cancer recurrence may safely skip chemotherapy without hurting their chances of survival. (AP Photo/Kathy Young)

About 17 percent of women had high-risk scores and were advised to have chemo. The 16 percent with low-risk scores now know they can skip chemo, based on earlier results from this study.

The new results are on the 67 percent of women at intermediate risk. All had surgery and hormone therapy, and half also got chemo.

After nine years, 94 percent of both groups were still alive, and about 84 percent were alive without signs of cancer, so adding chemo made no difference.

Certain women 50 or younger did benefit from chemo; slightly fewer cases of cancer spreading far beyond the breast occurred among some of them given chemo, depending on their risk scores on the gene test.

All women like those in the study should get gene testing to guide their care, said Dr. Richard Schilsky, chief medical officer of the oncology society. Oncotype DX costs around $4,000, which Medicare and many insurers cover. Similar tests including one called MammaPrint also are widely used.

Testing solved a big problem of figuring out who needs chemo, said Dr. Harold Burstein of the Dana-Farber Cancer Institute in Boston. Many women think “if I don’t get chemotherapy I’m going to die, and if I get chemo I’m going to be cured,” but the results show there’s a sliding scale of benefit and sometimes none, he said.

Dr. Lisa Carey, a breast specialist at the University of North Carolina’s Lineberger Comprehensive Cancer Center, said she would be very comfortable advising patients to skip chemo if they were like those in the study who did not benefit from it.

Dr. Jennifer Litton at MD Anderson Cancer Center in Houston, agreed, but said: “Risk to one person is not the same thing as risk to another. There are some people who say, ‘I don’t care what you say, I’m never going to do chemo,'” and won’t even have the gene test, she said. Others want chemo for even the smallest chance of benefit.

Adine Usher, 78, who lives in Hartsdale, New York, joined the study 10 years ago at Montefiore and was randomly assigned to the group given chemo.

“I was a little relieved. I sort of viewed chemo as extra insurance,” she said. The treatments “weren’t pleasant,” she concedes. Her hair fell out, she developed an infection and was hospitalized for a low white blood count, “but it was over fairly quickly and I’m really glad I had it.”

If doctors had recommended she skip chemo based on the gene test, “I would have accepted that,” she said. “I’m a firm believer in medical research.”