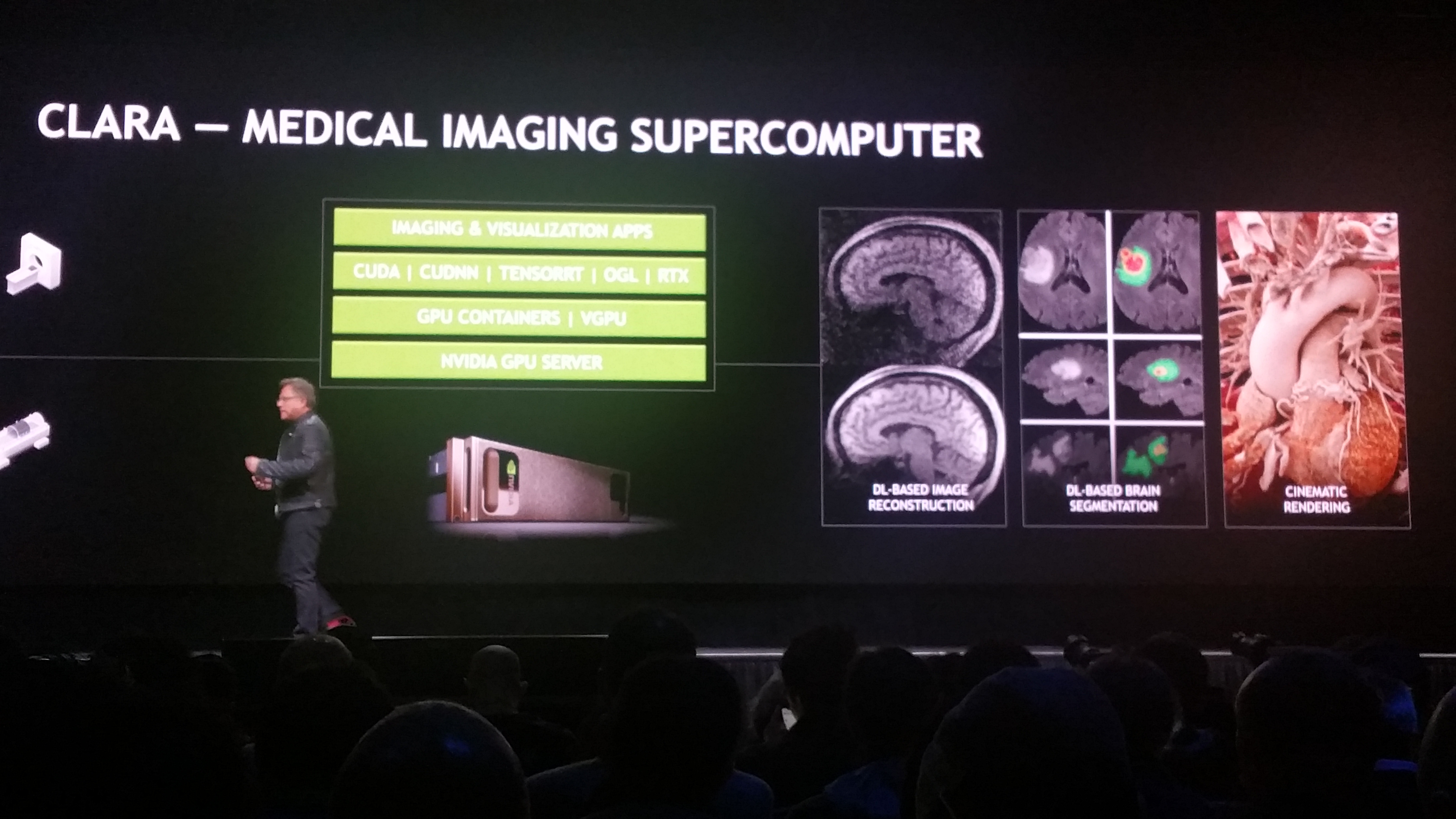 During his keynote speech at the NVIDIA GPU Developers Conference, CEO Jensen Huang, offered a tantalizing vision of how he intends to use company’s deep learning and image processing technologies to improve the tools available to healthcare providers. While most of the two-hour presentation consisted of demonstrations of the company’s latest developments in areas such as desktop supercomputing, autonomous vehicle technology, and hyperscale data centers, Huang noted that “the work we do in modern medical imaging is one of the things I’m proudest of.” (Note – Don’t miss the video of Huang’s demonstration towards the bottom of this feature)

With that, Huang called up a background graphic that illustrated how deep learning has revolutionized many aspects of medical imaging in the past few years. One image was of an ultrasound taken by a standard imager about 15 years ago and another was of a more recent image, processed with NVIDIA technologies. The difference between the grainy 2D greyscale image and the fully-rendered fetus, with accurate flesh tones, was striking.

“This technology is used everywhere, CT, MRI, PET scans,” said Huang. “We can now reconstruct images better than ever before. We can visualize images in a way that release more insight with cinematic rendering. The entire software stack, the solvers and libraries, integrated into this is identical to what we’ve talked about.”

“This technology is used everywhere, CT, MRI, PET scans,” said Huang. “We can now reconstruct images better than ever before. We can visualize images in a way that release more insight with cinematic rendering. The entire software stack, the solvers and libraries, integrated into this is identical to what we’ve talked about.”

Huang noted that while most new medical imaging machines would have some or all of these capabilities, it would take many years for the benefits to be widely available because of the long service life of the old equipment in the field. “The unfortunate thing is there around 3 million medical instruments installed, but only 100k sold each year. It would take 30 years to update everything” he said.

The answer, said Huang, is an NVIDIA initiative called Project Clara – a virtualized data center, remoted, multi-modality, multi-user. “It’s a medical imaging supercomputer,” said Huang. “It’s possible now for us to virtually update every system that’s out there. You can scan using your existing scanners and we’re able to put images through a supercomputer and infer images. We are working with us are dozens of healthcare companies, research institutions, and startups.”

To illustrate his point, Huang displayed a 15 year old traditional ultrasound motion image of a human heart, and then a version of it that had been enhanced through several image processing techniques. “You stream the ultrasound information into the data center, and you can now get a volumetric, modern view of it. Using additional AI technology, it can infer what details like the left ventricle on a heart would look like and segments it out as a 3D image. That’s pretty incredible,” Jensen said.